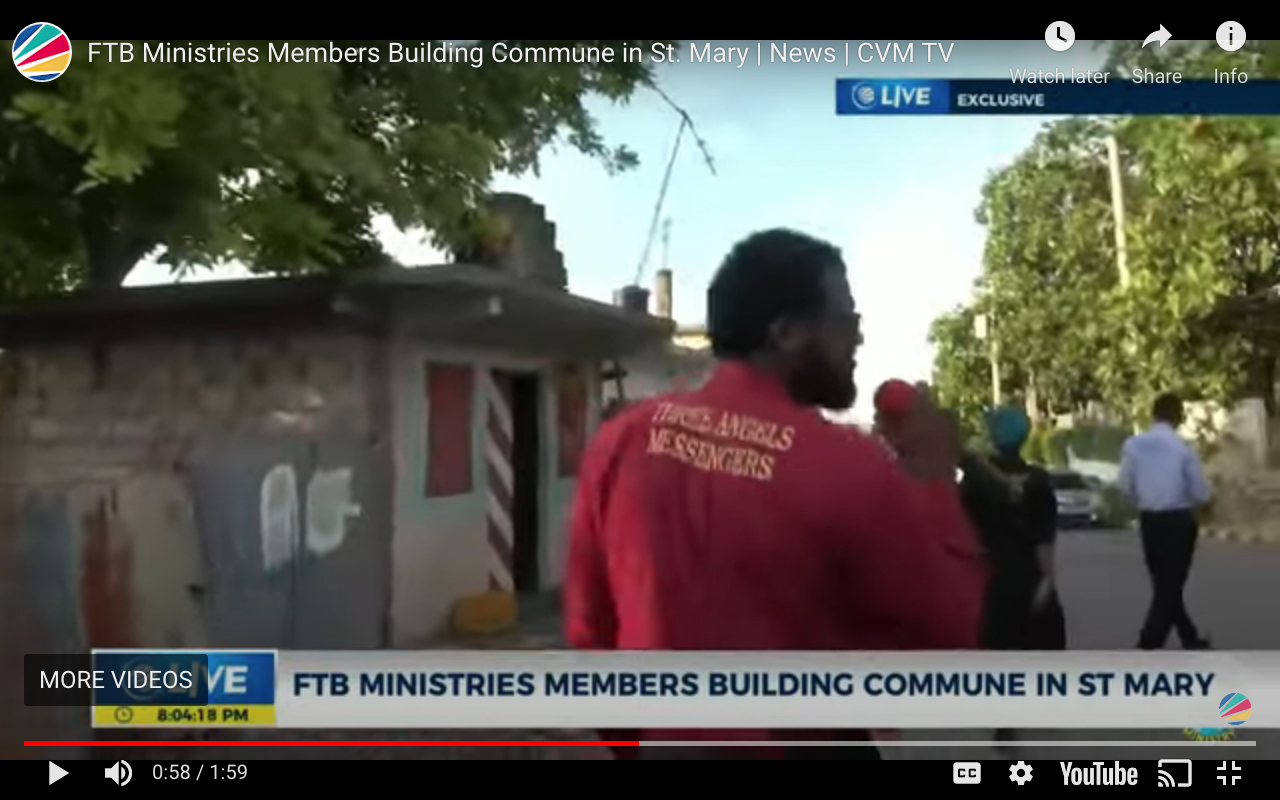 20 December 2021 | Recently, members of Following the Blueprint (FTB) Ministries in Jamaica have banded together to build a community nearly an hour’s drive from the closest town to prepare themselves for the end times, reported CVM-TV.

FTB Ministries is said to be an offshoot of the Seventh-Day Adventist church that bases much of their teachings and practices on the counsel of Ellen G. White, a co-founder of the church whom many believe to have been a prophet.

A CVM-TV news team went out to visit the site, Bell Hill in St. Mary, and found it very rural, with a nearly impassable road. In fact, the news team’s vehicle got stuck on the road, and members of FTB came to their aid.

An unidentified FTB member said the community offers a peaceful living and is a quiet area with no crime. The group the news team came across consisted of men, women and children. Locals claim that professionals from the medical, financial, and educational fields are members, according to an article in the Jamaica Observer.

Residents from the surrounding communities said they do not know much about the group. Most said the group was peaceful and unproblematic. A local farmer, who occasionally supplies produce to them, said they were vegetarians and spent most of their time “keeping church.”

The CVM-TV news team was unable to determine whether the children were currently enrolled in school, what amenities they had, and how they hoped to provide for themselves.

FTB Ministries was started in 2002 by Vincent Hoo. William Lecky also apparently influences the group. They are known for their aggressive methods of evangelism and marching through towns in Jamaica, urging people to be saved.

FTB Ministries has been in the news this year as the group behind plastering Jamaican neighborhoods with “Sunday Law” and “Mark of the Beast” billboards.

The group was also accused by Densil and Glynis Grey of “brainwashing” their daughter, Deneel, who dropped out of university to join FTB Ministries, according to an article in the Jamaica Star.

“She became unruly and argumentative. She would look into space, isolate herself in her room, change her eating habits, her style of dressing, and began reading specific books,” said her father, Densil Grey.

Deneel Grey later told the Star that she had not been brainwashed. “Seventh-day Adventism is a lifestyle. It is guided by the principles in the word of God, and wherever that is advocated, that is where true Adventism is found. The Lord would have brought me into a knowledge of many of his truths that FTB Ministry advocates before I would have been introduced to FTB Ministry,” she said.

Deneel Grey said she plans to work as a medical missionary, and has no regrets about leaving behind her previous ambitions to do God’s work.

However, others are already drawing parallels between FTB Ministries and the Branch Davidians, a group that broke away from the Seventh-day Adventist church and established a commune in a remote area of Texas to wait for the second coming.

The last leader, Vernon Howell, who later changed his name to David Koresh, came under investigation by federal agents for child sexual abuse and illegal firearms. Some 80 Branch Davidians of all ages died in a fire that erupted during the siege on April 19, 1993.

“The isolation from family and friends is not accidental and rejoining society is usually a challenge,” wrote Glenn Tucker, an educator and sociologist, in his article for the Jamaica Observer.

(Photo: Members of the group Following the Blueprint Ministries are seen evangelizing in the streets of a Jamaican town. Recently, the group has been in the news for retreating to a rural area to build their own community. Photo via screenshot of CVM-TV.)