In the World and of the World

Back in my days as an Adventist, there were seven words I kept hearing all over the place—in church, in Bible studies, in Sabbath School classes and summer camps and college courses and office worships. I heard these seven words so often they began to seem like my colleagues’ mantra, their mission statement, their guiding light for all decisions.

What are those seven words?

Or, boiled down to just one hyphenated word: “counter-cultural.”

In theory, this is a good mantra. I see a lot of news stories about the corruption, violence, oppression, pollution, and greed that run rampant in the world. I read about appalling miscarriages of justice in our court systems, economic inequality, and the abuse of people and animals, and my heart breaks for those victims. If being “in the world, not of the world” solely meant fighting against these injustices, I would be fully in support of this mantra.

But it generally isn’t. Far more frequently, it seems to be used to justify opposition to same-sex marriage or premarital sex. It’s used to justify rules about what women can wear and study and do. These topics dominated a human sexuality course I regularly eavesdropped on from my office at a previous job at an Adventist university. During this class, I heard more exhortations against tight skirts and promiscuity than I care to count. I saw a student kicked out of class because of the blouse she was wearing. I heard misconception after misconception about the LGBTQIA+ community presented as fact, from “Gay people are gay because they were molested as children” to “Transgender people are just confused”—lectures that sent me, as a bisexual lady, into the depths of despair. I have faced depression off and on since I was thirteen years old, but I have never been as persistently, consistently, deeply suicidal as I was during the two years I worked at that Adventist university—hearing those things in staff worships, listening to my colleagues teach them as fact.

Non-Adventists were a huge source of strength in those days. They pointed out flaws in the arguments I heard at work, and gave me hope that I wasn’t alone in the closet. They offered sanity checks and assured me that it was, indeed, unusual and inappropriate when my coworkers made remarks about my supposed virginity.

I needed love. I needed hope. I needed strength. And when it became clear that there was no mechanism to find those things within the church, no foundation on which the compassionate and thoughtful practices I needed could be built, my only option was to leave.

Don’t be a temptation!

This last situation strikes closely at my heart. From middle school until grad school—roughly a twelve-year span—I struggled mightily to find clothes that fit my curves, met the prevailing standards of modesty, and still looked cute. With a lot of hard work, I could meet two of those three criteria. Still, sometimes it seemed like no matter what I did, I met with resistance from a community that was closely (and, in retrospect, creepily) invested in my body. Frequently, from speakers and camp counselors and teachers, I heard that the other girls and I had a responsibility not to “tempt” our “brothers.” Occasionally, speakers compared immodestly dressed ladies to bones or treats left in front of an unsupervised dog (a comparison that favors neither the guys nor the girls). I have never heard a church leader or teacher or camp counselor use his or her pulpit to encourage the guys in the audience to treat their “sisters” with respect regardless of attire.

“Every morning, as you get dressed,” the church told me, “you should know that you’re playing a Kafkaesque version of Chutes & Ladders, where a ‘good’ outfit could send you slightly up in the social hierarchy, and a ‘bad’ outfit could send you sliding down into the depths of being publicly humiliated by authority figures, inviting harassment, getting a ‘reputation,’ and/or never finding a husband (the horror!).”

After twenty-odd years in that particular stew, I wondered what “the world” had to say about modesty. The world told me, “Don’t wear a bikini to a funeral.”

Sometimes I hear church leaders saying, “We have to fight to prove our relevance.” I disagree. Church, you don’t have a problem with relevance; you have a problem with priorities. What use is the purity of your doctrine if it hampers your ability to see God in others? What use are higher church membership numbers if we are letting vulnerable populations fall by the wayside as acceptable casualties? What use is a certain interpretation of the Bible if it doesn’t lead us to love the Lord our God with all our heart and soul and mind, and to love our neighbor as ourselves? What use is a Gospel that does not transform our attitudes towards the poor, the sick, the imprisoned, and the hungry? What use is a Savior who came to earth as a humble, unassuming carpenter, if we use His name to underwrite our greed and cruelty?

This is the task that lies before you, church: To decide how you want to be different from the world around you, to calculate the costs of those differences, and to own those costs. If your differences cost you political influence, own that. If they cost you the accolades of powerful people, own that. If the cost is the confidence and trust of many of your young women, then own that. If you decide that the lives of LGBTQIA+ folks are an acceptable cost—and believe me, unaffirming theology can and does kill people—then own that.

But let’s have no more pretending that the church is not causing certain types of harm that it is, in fact, causing. Let’s have no more speculating that ex-church members are morally weak or “couldn’t handle the truth.” Let’s drop the position that secularly popular things or movements or activities should be automatically, unequivocally shunned. The world is having important conversations right now about race and gender and sexuality and faith and health and class. The church will be a part of those conversations, either by its participation or by its silence.

I am in the world and of the world—a place I accept with gladness, a position that makes me balance humility with joy. Won’t you join me here? 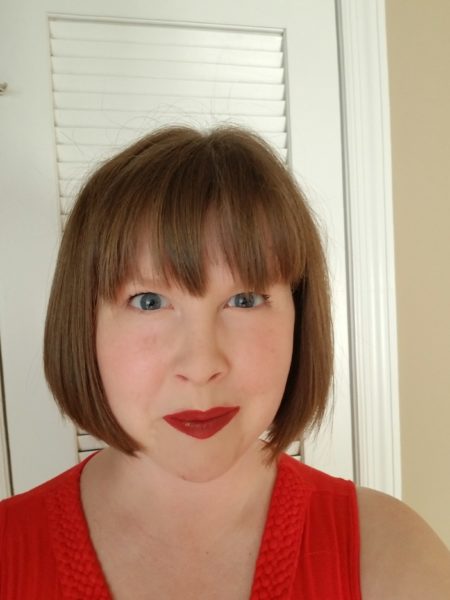 Anticipating AT1–October 2, 2020 Aunty, must I invite my abusive stepfather to my wedding?