In All Humility: Saying No to Last Generation Theology 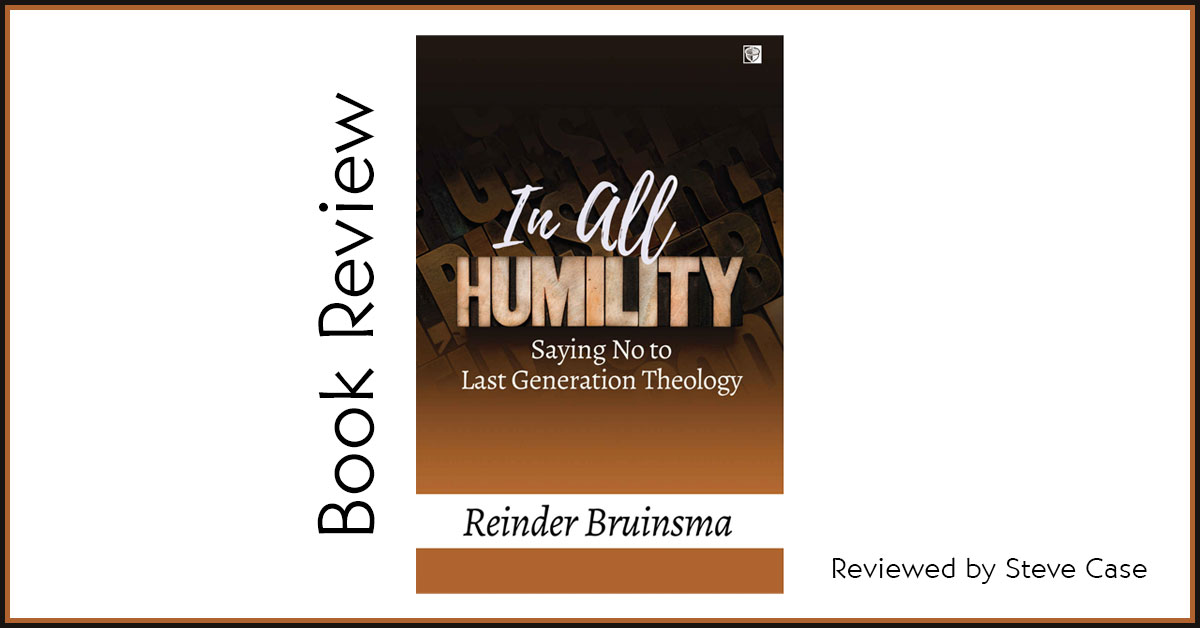 In All Humility:  Saying No to Last Generation Theology. by Reinder Bruinsma.  Oak & Acorn Publishing, 2018.  Reviewed by Steve Case.

While this book is written primarily for Seventh-day Adventists, the background for it certainly predates Adventism. Christians for centuries have debated the nature of Christ and the nature of man. Was Christ fully God? Was he fully human? How can he be both? Do you lean more toward one side or the other? As a human, was Jesus born with a sinful nature (like us) or with a sinless nature (like Adam at creation)?

If Jesus was born with a sinful nature like us, he is the example that we must follow. This includes overcoming all sin in our lives. If you haven’t done that, something is wrong with you.

If Jesus was born with a sinless nature like Adam at creation, how can he be an example for us? It seems this would have given him an unfair advantage. Our attempts to “be like Jesus” will all fall far short.

Frequently the thoughts and conversations move to observable behaviors. In Adventism, the emphasis focuses primarily on stopping negative actions, such as smoking, drinking (alcohol), dancing, listening to current music, wearing jewelry, eating (unclean) meat, and Sabbath observance. In the past, behaviors such as attending the theater, wearing makeup, playing cards (gambling), and even bowling (sleazy, gang-infested, smoky environment, right?) were questionable. Such a perspective emphasized not doing bad, but little mention of doing good. In this respect, a cadaver would be close to perfection because it wouldn’t do anything bad (but certainly wouldn’t do anything good!).

Within the Seventh-day Adventist denomination, with a focus on the imminent return of Jesus, and with an easily observable behavior different from most Christians (worship on “Sabbath” rather than on Sunday), differentiating between “us” and “them” becomes a matter of separating the wheat from the chaff within the SDA church. Those with a propensity for adhering to “the list” might develop a sense of being the kind of model Jesus wishes for all people to follow.

Additional steps follow. Those who act better (not doing stuff found on the list of bad things—sins) believe they are closer to God (and assume God prefers it that way). Such achievement places them in an elite status, like a Navy SEAL or Army Ranger—the military’s special forces. Instead of military terms, the religious terms would be 144,000 in contrast to the “great multitude” found in Revelation 7. Without Biblical clarity, the 144,000 come to mean God’s true people when Christ returns, and the great multitude are God’s people throughout history whom Christ resurrects at his return. Because there will be a time of trouble such has never been in the history of the world, those who endure through it deserve a closer spot to God’s throne because of all they’ve been through for Jesus.  Assuming that God’s people at Christ’s return will all be Sabbath-keepers, you still need to weed out the vast majority. Adventists refer to this as “The Shaking.”

The number 144,000 might seem like a large number, but with more than 20 millions SDAs currently, that would be only one out of every 139 people. That means for you to be part of the 144,000, there will be 139 other SDAs who won’t make the cut. You truly are amazing! To be part of God’s last generation is an honor for only the best of the best. Let this motivate you to be good—very good.

Bruinsma spends a considerable amount of space dealing with Ellen White quotations, including providing a context (historical and literary). It seems that those with a bent in favor of Last Generation Theology tend to prefer the writings of Ellen White over the Bible. By picking and choosing one’s favorite quotations (context of the quotations isn’t that important), one can gather a collection large enough to feel certain about anything.

Perhaps the Ellen White quotation most often used with the Last Generation Theology is “When the character of Christ shall be perfectly reproduced in His people, then He will come to claim them as His own” (Christ’s Object Lessons, p. 69). The common interpretation is that Christ won’t return until he gets enough good people. This isn’t much different than the Jewish expectation that if all Jews can keep one Sabbath holy, the Messiah will come. Both of these explanations place God at the mercy of human achievement. It’s as though Jesus has to keep doing a “fly by” because he wants to return, but he really can’t do anything about it until things on the ground get better.

When reading a collection of these Ellen White quotations, you’re not likely to see this classic statement in the well-known book Desire of Ages, page 32, “Like the stars in the vast circuit of their appointed path, God’s purposes know no haste and no delay.” The context of the beginning of The Desire of Ages deals with the birth of Christ—his first coming. Like Christ’s first coming, there’s no reason to expect that his second coming is in the hands of man rather than in the purposes of God.

Bruinsma titled the book in a clever manner: In All Humility. Ironically, this seems to be a quality absent from those who espouse a Last Generation Theology. Their self-evaluated achievements and favorable comparisons to others make humility a ruse.

If you’re a believer in Last Generation Theology, you are likely to be offended by this book. For those uncertain, it could provide a lifeline to keep God as God rather than trying to take his place. And for those who interact with any who hold to a Last Generation Theology, this book could provide you with the background and broader thought needed to hear, respond, and invite all whom Jesus takes to heaven to place their crowns at his feet.

Steve Case, president of Involve Youth, has also been conducting Revelation seminars throughout North America and creating Revelation resources since 2010.