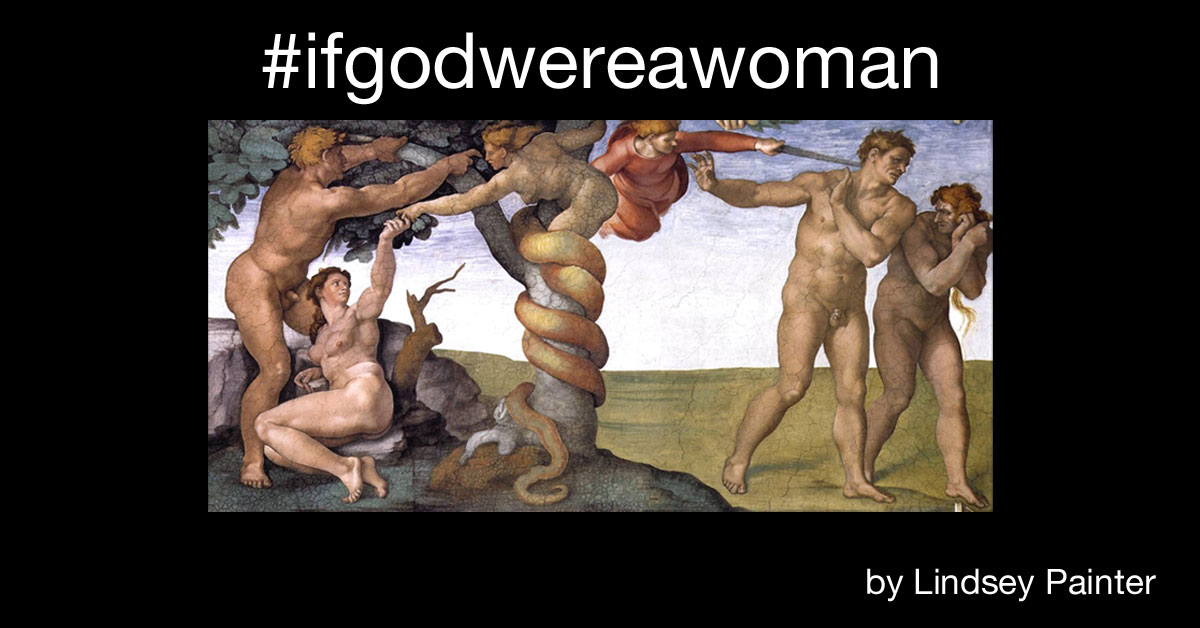 When I was in college I went to Europe with my best friend. One of the places we visited was the Sistine Chapel. I was admiring the breathtaking beauty of the images on the ceiling when I noticed something odd. Pointing upward at the image depicting the temptation in the garden of Eden I asked my tour guide, “Why is Satan painted as a woman?” The tour guide looked startled and looked upward himself. “He isn’t.” “Ummmm… yes. She is. She very clearly has breasts. And her hair is long like Eve’s not short like Adam’s.”

Thanks a lot Michelangelo! But Michelangelo was not the first or the last to associate Satan with the feminine gender. Christianity, at least during the time of the classical painters, seemed to have no problem depicting Satan as female. Not God, though. And this trend isn’t limited, of course, to classical painters. Referring to God as a woman has made Christians uncomfortable, even scandalized, for hundreds of years.

I can’t help but feel that this is because there is, in the Christian mind, something bad about women. Something a little indecent, a little off-putting about women that makes God’s association with us unacceptable. As a little girl I could not have put this into words; nevertheless, there was a sense that to understand God in female terms was to diminish God.

What does that say about me? If a Being as powerful and unchanging as God cannot even be thought of in the feminine gender without being reduced in some way, how am I, a lowly human woman, not to understand that my very gender diminishes me? That by occupying a female space I am smaller, and less worthy than a man?

This question of the gender of God has been confused by depictions of the goddess in pagan and new age religious traditions. At least that’s what I’ve been told. We can’t refer to God as a woman because the idea of God as a woman reminds us of Wiccans and dangerous new age religions! My question then is, why, when we refer to God as a male, do we not think of Buddha, Allah, Zeus, Krishna, Akal Purakh, or any of dozens, or hundreds, or thousands of other male gods from religions around the world? Why is a female God tainted by association with false gods, but a male God is not?

When I was a child I remember being puzzled when the pastor claimed that Jesus experienced every single thing that humans experience on earth so that he could have a complete understanding of humanity. In hindsight, I suspect he meant that Jesus experienced all human emotions and temptations. But in my pre-teen years that idea raised so many questions. Did Jesus know what it was like at the end of the day in Junior High to see a bloodstain on the back of his pants? Did Jesus ever feel uncomfortable because grown men made suggestive comments about his developing body? Did Jesus ever struggle not to feel shame about his breasts? Did he feel the shame of being rejected by a boy because of his looks?

Obviously not. When I lay in bed at age 13, missing school, crying in pain from menstrual cramps, I considered praying to God about my pain. I elected not to. Because God was a man, I reasoned with my 13-year-old self, he doesn’t want to hear about my period problems. But even as a grown woman, I ask myself about Jesus identification with the problems women face. Did Jesus ever know the pain of a miscarriage? Did he know the longing for a child, or the dread of an unwanted one? Did Jesus experience the burden of emotional maintenance of a household as the vast majority of women do?

The insistence on God as male, or at least that God be referred to as male even as we say God is genderless, creates a barrier between God and women.

My point is that the insistence on God as male, or at least that God be referred to as male even as we insist God is genderless, creates a barrier between God and women. Was I created in God’s image? Really? Because I can’t see it. The curve of my hips, my breasts, my monthly cycles, even the experience of growing a child and birthing it, has no place in the Christian understanding of God. The God I have been taught isn’t a part of these things. And that makes God seem distant, and so unlike me.

There’s a lot of talk in the larger culture these days about representation. Women, people of color, the disabled, LGBT+ people, all are underrepresented in our movies, TV shows, and general culture. I believe it is just as important for people to see themselves represented in God. God isn’t male. God isn’t white. God doesn’t have a sexuality. So it’s interesting that Christians are so defensive about the way we imagine Her. That the use of the word “her” in the last sentence might have made you uncomfortable. Even as I am writing this article about how important it is to sometimes refer to God in the feminine, I have to keep going back and editing out the use of the masculine pronouns I accidentally wrote.

I don’t want to descend into gender stereotyping here, but there are qualities that our culture, rightly or wrongly, associates with women. Qualities that God possesses. Nurturing, compassion, empathy, mercy, love. Not to mention, the reproductive process, growth and birth. These qualities are present in the God of the bible. And when our culture views Her exclusively as a man, it’s harder to see these stereotypically feminine qualities. Much easier to see a male God having righteous anger, exacting justice, showcasing strength. Those qualities exist in God as well, of course. But without the feminine aspects, Her character is only half understood.

I am not the first to note the reason Mary the Mother of Jesus has been semi-deified within Catholicism is that she is a figure women (and men, too) can relate to in a more intimate way than than can to a male God. Her popularity, deserved or not, is an indicator of a need: the need for representation within the church of a feminine divine.

I ask this question: what if God were a woman? What if She were a powerful, glorious, mysterious, loving, Goddess? She would want to hear me at 13 years old tell her about my body, my fears and my shame, my growth and my dreams. I want my daughter to feel a connection to Her like I never could. I want my son to recognize the female in God as well as the male. I want all of us to see that calling God a woman isn’t to diminish Her, but to elevate Her—a God representing us all. 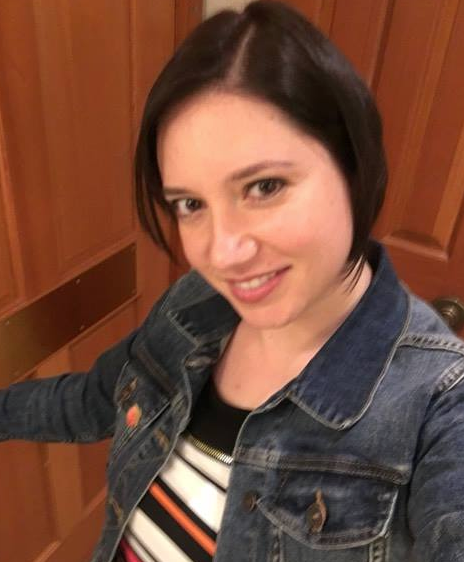