How I Got the Compliance Committee News So Wrong 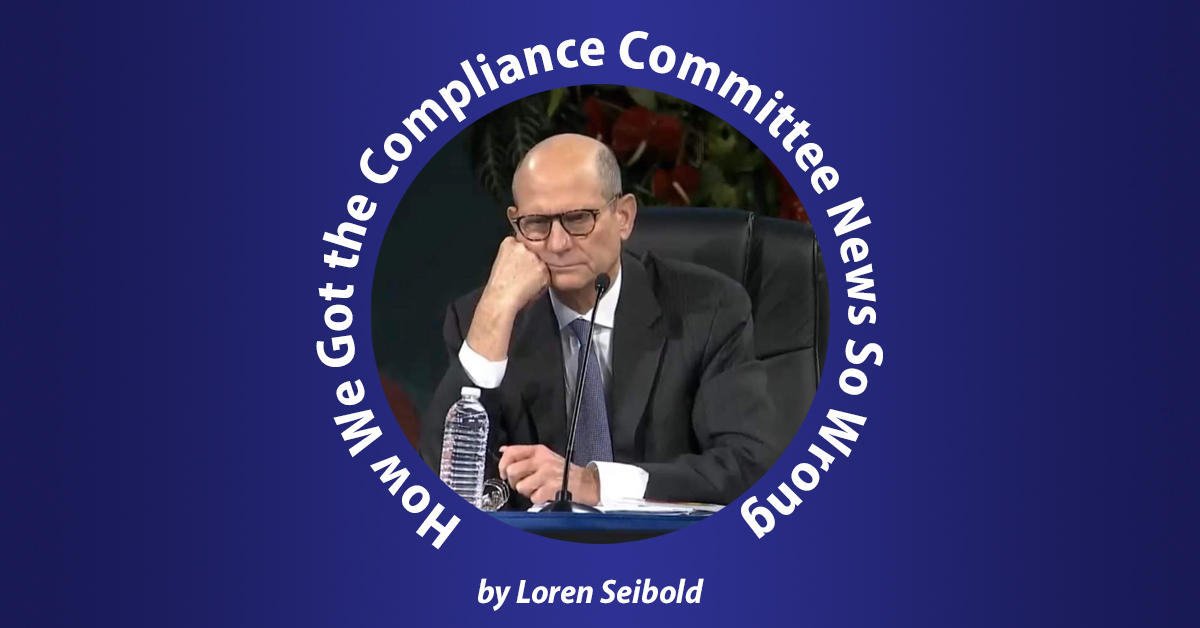 Just one month ago, I published a piece about a rumor I’d heard concerning the discontinuance of the infamous compliance committees. I took my cue from two bits of information: some leaks we’d heard from an Adventist Today friend to the effect that Elder Wilson was having second thoughts about the compliance committees, backed up by an article at the Spectrum website that said, “The non-functioning Compliance Committees created prior to the 2018 Annual Council meeting of the General Conference Executive Committee may never see the light of day”.

I’m not certain how my friends at Spectrum interpreted these bits of news, but I myself took them to mean that for some reason or another Elder Wilson was backing off, at least for the nonce, from the whole notion of the GC forcing compliance upon judicatories and leaders.

I was wrong. And I am making an apology to you. What the stories we heard really mean—as Elder Wilson has made very clear—is that he hasn’t changed his mind about threatening and reprimanding regions of the church and their leaders for exercising their own judgment about how to do mission in their territories, but has merely chosen to eliminate the advisory element of the process—the committees themselves—and pull all the authority in close to himself.

His rationale, as he explained it to the GC Excom, is that the compliance committees had been so unfairly maligned by his enemies that they had been been rendered useless. In this, he misstated the situation. At least in my corner of the world, it was his imperious style, treating certain union conferences like children to be hand-slapped, and acting as if this were the only instance ever heard of (a claim he made again in this meeting) in which any church leader or region had ever acted against a GC session vote.

Just when I thought I couldn’t be any more surprised by the leadership methodologies of the General Conference of Seventh-day Adventists—this.

We all knew that the compliance committees were going to be selected by Elder Wilson, but they at least had the pretense of independent consultative bodies bringing recommendations to the GC Excom. But without so much as a by your leave, the compliance committees are gone. Poof. All those documents written, studied, discussed starting back in 2017? All those arguments in Battle Creek? Contentious votes? Tension between divisions? Enemies made? People, electrons and ink flying all over the world? High dudgeon on both sides over this action?

All for nought. The whole process was deactivated by the word of one man.

To be fair, even some people much wiser than I misread the compliance committee gossip. Retired VP Lowell Cooper thought it reflected a realization that “the Compliance Committee process would collapse of its own weight. Nor could the volume of non-compliance matters be satisfactorily addressed by a small group at the GC.”

But the result, most of us would say, is worse. It is not a small group of committees enforcing compliance. It is now in the hands of an even smaller and more concentrated core, all of them tightly surrounding Elder Wilson.

Some of my previous observations may still apply.

Elder Wilson was, it appears, having second thoughts about the compliance committees, and some may have told him they didn’t like the idea. I may even have been right that some people somewhere didn’t like the process because they were afraid of what the advisors in these committees might decide. What if a committee thought the financial scandals that are popping up in India and elsewhere really did need to be looked into? It might be better to choose a trial with a judge favorable to you, one up for reelection, than putting it before an unpredictable jury.

In my previous piece I asked, “Is church policy being shaped for the purpose of getting a 70-year-old man reelected to office?” That’s still a fair question, only now one assumes that it is not the enacting of punitive measures that would hinder his being elected, but failing to push compliance and obedience in a sufficiently authoritarian manner. Perhaps he believes (not without reason) that peremptory enforcement is what most General Conference Session voters want most to see in their top leader. If so, he’s in like Flynn.

I asked, “How soon after reelection would he bring back a restyled disciplinary process?” Another misreading of the situation on my part: we didn’t have to wait for reelection. The disciplinary process was streamlined “on the go” into one man and his underlings calling the shots. That is to say, being a strong disciplinarian seems to be a campaign strategy, and it might be a good one.

I dreamed of “an apology for putting the church through this fight.” Of how gracious it would be for Elder Wilson to say, “I was wrong. The church shouldn’t be so hierarchical. I repent of the authoritarian way I’ve gone about things. Let’s give the regions of the church more autonomy in some matters, like women’s ordination. GC-enforced compliance isn’t a good idea.”

Again, I repent of my optimism. I was naïve. There was no repentance, just a doubling down on the official disapproval.

I wrote, “What was missing in the compliance discussion was any specific reference to enforcing ethical institutional behavior in general,” but I still hoped that perhaps the process could be used for “rooting out corruption.”

That hope was dampened on Wednesday afternoon in a very serious discussion on the multiple irregularities found by the General Conference Auditing Service. Associate Secretary of the GC Elder John H. Thomas pointed out that year after year he had observed entities that were never prepared for or willing to be audited, and concluded that “they don’t want to have their finances audited because they don’t want anyone to see how the money’s being managed.” Why? “The delegate count in those unions is high, and to upset that cart may impact voting. So it is left stagnant in order to protect that person’s position.” He asked if he could make a motion that the cases of “those that have unauditable finances” be handled by “the noncompliance steps that we voted at Battle Creek, as a major item for that committee to look at.”

Elder Thomas seemed to be saying, “Corruption continues because leaders want to get voted back in, and you can’t investigate this corruption without making people mad and losing votes. So this seems like an ideal job to turn over to the compliance committees.” Yay, JHT!

The chair’s response? “I don’t want to accept that motion, because we have to look at the way that is best to do it.”

I didn’t know that a chairman could unilaterally refuse to accept a motion. Turns out that in our church, one can. You know that big foot in the animated Monty Python intro that stomps down on the screen? That was Elder Thomas under it. At that moment it became clear that as bad as the whole notion of compliance committees was, it can be worse: one man can take it upon himself to decide what the GC Excom can vote on!

To return to where I started: I apologize to you all that I so misread the leaks that came my way about the compliance committees. I was right that the disciplinary processes weren’t gone for good. What I didn’t realize is that the restyling of the process meant immediately and unilaterally dispensing with all voted processes. As though they never existed. As though the last two years of documents and votes and discussions and arguments never even happened.

If I were a member of the GC Excom, I’d feel insulted by the way my time and emotional energy had been wasted for the past two years.