How Easily Are We Fooled? 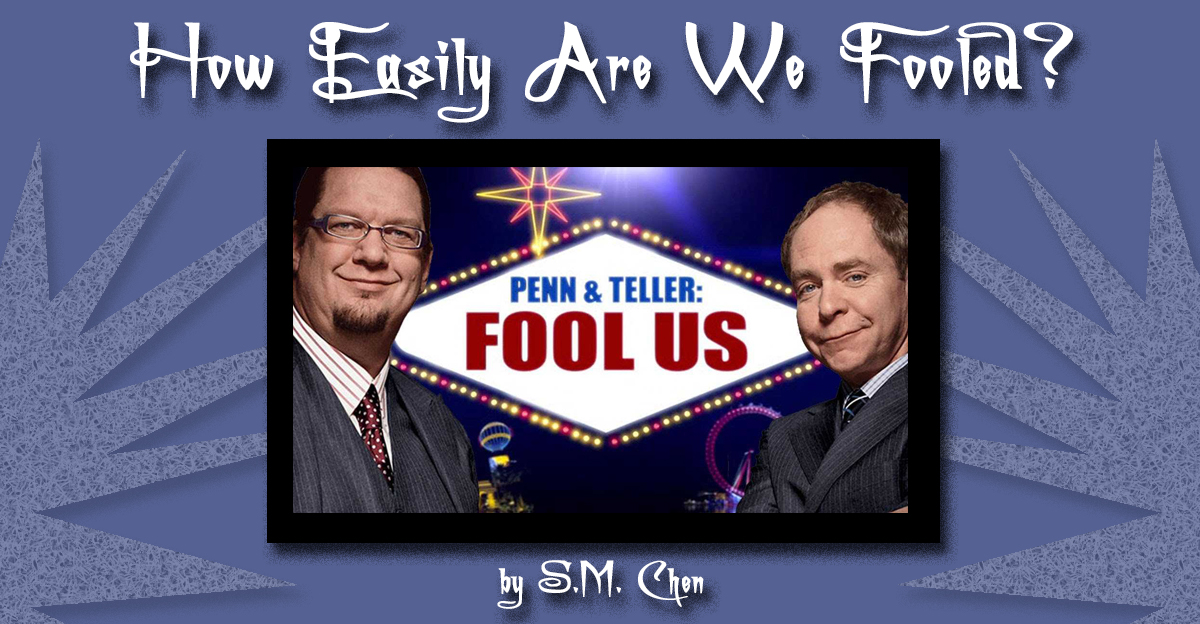 One of the more interesting reality TV shows, in its 7th season, is called Fool Us!

Penn Jillette and Raymond Teller, one of the more enduring magician duos in Las Vegas, host various magicians consecutively. If the magician succeeds in fooling Penn & Teller, he or she gets to appear on the latter’s show at the Rio Hotel & Casino in Vegas, so it is both present honor and future opportunity.

Some of the contestants have fooled the famed duo in the past, and their intent is to do so again. Others have not been so lucky.

Teller is the shorter, silent one. What Penn has to say is often worth listening to carefully. He speaks rapidly but with authority.

Having no skill in prestidigitation, I cannot always ascertain the criteria they use in determining whether a given magician succeeds in fooling them. But enough is said by Penn Jillette which, though sometimes enigmatic to us listening, lets the performer know that he or she hasn’t fooled the hosts.

The show ends by having Penn & Teller perform.

Their act is smooth and polished. It is satisfying to be hoodwinked by consummate professionals.

All in all, a good time is had by all, including the audience.

One of my sisters recently forwarded an online video to me. An Assembly of God pastor in Burkesville, KY—one Dana Coverstone—reports three visions or dreams that he purportedly was given of the future. Some are alarming.

When one is confronted with such a thing, the question that arises is the origin of the purported dream or vision—whether it comes from a good place, or not so good. Both good and evil can pretend to be the same thing: namely, inspiration. The former has our best interest at heart. The latter? Not so much.

I viewed the video with not a little interest. I am not convinced that all inspiration ceased in the past, nor that there is no room for more inspiration in the future. Inspiration may be a well which has not dried up, though we may have to go deep to find water.

Near the end of the presentation, Coverstone said a couple things that made me wonder where his inspiration comes from. He advised storing hard precious metals—silver and gold—against future calamity, as well as ammunition and guns—things that a survivalist might advocate.

My ears perked up.

It is my belief that end-time believers will not be asked to kill or maim their fellow humans in defense of property or even their lives. Christianity does not condone violence. I find appealing the messages of those advocating non-violence, such as Mohandas Gandhi and Martin Luther King, even in protestation of perceived societal wrongs.

As Martin Luther King Jr saw it (this originally a quote by a 19th-century clergyman, Theodore Parker): “The arc of the moral universe is long but it bends toward justice.”

One of the refrains of the Civil Rights movement about a half century ago was: “We shall overcome… someday.”

That someday may yet await. But ends do not necessarily justify means.

Furthermore, during His earthly ministry Christ admonished against storing money on earth.

I suppose this doesn’t necessarily invalidate Coverstone’s purported visions. What he predicts could come to pass—but I believe the source of his “inspiration” to be suspect. He himself challenges us to determine whether he is a false prophet by what unfolds. We will know soon, for his dreams/visions concern the near future.

The human brain is a wonderful organ. Experts estimate close to 100 billion cells reside therein. It’s been said that people use no more than 10% of their brain power. Considering some of the great minds we’ve been privileged to observe, this is a sobering realization.

The mind can also be tricked, however. As Gilbert and Arthur Sullivan put it nicely in HMS Pinafore, a comic opera performed in 1878: “Things aren’t always as they seem; skim milk masquerades as cream.”

One fascinating illustration of that is the case of a rubber hand illusion. (It’s much easier to see than describe, so I’d suggest you look at the first couple of minutes of this video.) A rubber hand is placed on a table where a person’s real hand would be, and camouflaged to look as though it is in the place of the person’s real hand (which is actually out of their sight behind a screen). The rubber hand is stroked as the person watches, at the same time as their real hand is being stroked out of their view. Eventually—even though he or she is fully aware of what is happening—their brain subconsciously adopts the rubber hand! When the experimenter strikes the rubber hand, the subject reacts as though he or she is experiencing actual pain!

This unusual phenomenon, experienced by the majority of individuals tested, seems related to the pain felt by some amputees in a phantom limb.

An even simpler example of mind over matter is this:  think of a lemon or lime wedge. Notice the increase in saliva merely at the thought of slice of citrus. None actually need touch your mouth. This recalls what transpired with the dogs of Ivan Pavlov (1849-1936). Trained using a bell by the Russian physiologist to tell them when it was time to eat, the dogs would eventually salivate merely upon hearing the bell—no food involved.

We live in perilous times. They have come upon us rapidly, through circumstances no fault of our own. It is vital to remain vigilant, in order to discern between the genuine and the ersatz. To not let ourselves be fooled.

Our future may depend on it.