His Blood, or Ours?

Mugonero in Rwanda was a quiet place. I recall a lush hilltop garden mission with a hospital of excellent reputation.

It was a paradise—until April 16, 1994. Hutu pastors had told Tutsi pastors they would protect their families if they came to the church. But according to court records, some Hutu pastors then called in the militia. The church was set ablaze, and those who tried to leave were shot or hacked to death. It wasn’t a case of bad guys against good guys, but Adventists against other Adventists based on problems we try to avoid talking about: tribalism, race, and caste.

Are Biblical principles sufficient to guide our church organization? Can our structures function without favoritism, prejudice, tribalism, racism, or a systematic devaluation of others?

Asking that question of believers would seem almost silly, if it weren’t so serious. “Of course!” is the easy answer. “With God everything is possible!” We all know that as adopted blood-children of Christ, His principles are to supersede our prejudices.

But what if our response, after what we’ve seen happen in the church, is a hesitant, “Maybe?”

You have heard the rumors that leaders in some of the overseas divisions and sub-levels use their positions in the church to make a great deal of money. Many people, in fact, know me as the person who has to deal with a particular problem involving corruption in the Southern Asia Division concerning a project my family initiated, and in which we were joined by others in our church family.

Because of my activism with regard to the problems in the Hope Center project, my inbox overflows with stories about the Adventist work in India that concern me. I wish they weren’t true—and some probably aren’t. But I know enough to know that some are, in fact, likely to be.

Such issues put church members and workers in a difficult situation. If our primary purpose is to live out God’s character, we cannot ignore problems with honesty and accountability, nor with methods that misrepresent Christ. When trespasses are handed over to the public or the government, it stains the church. But can we allow a plague of evil to prosper in the name of God?

Some, when they hear of these problems, say, “Leave the church alone! It belongs to God and He will oversee it.” But others plead, “Leaders are corrupt! They get rich while pastors and workers go unpaid.” And, “Those who point out the corruption are severely punished.” Most beg for organizational intervention in both finance and leadership.

There will always be disappointments when someone falls from the Ten Commandments, as when a hand is discovered in the till or on someone else’s spouse.  So, it would indeed be strange if a church highly concerned with right doctrine tolerated open practices of wrongdoing.  We speak so often of The Great Controversy, that we may forget it can also exist among us.

If we neglect to hold each other accountable, we will suffer both from persecution and self-inflicted rot.

If my observations are correct, one of the big problems in India has to do with caste—in other words, bloodlines. These cast a long shadow over structure and finance in the church in India, rather than Godly principles of respect for all. In other parts of the world I read of similar alignments based on tribe, or favoring family members for special privilege in church jobs.

Even though I grew up in Africa, it would be foolhardy for me to think I understand every cultural or national shade of meaning, having grown up in a lily-white family. Yet I’ve spent a lot of time in mission work. My own family of adopted children is American, Canadian, French, Italian, German, African, Dutch, Irish, Scottish, and English.

So you won’t be surprised that I’ve come to the conclusion that racial prejudice, racism, caste, tribalism and their ilk are entirely stupid—and you can quote me if you like! What happened to enjoying diversity instead of abusing it? Cultural differences are marvelous! Mexican mariachis, Chinese acrobats, Celtic dancers, and Alaskan lumberjacks all in the same group help us live lives filled with color. There are far more vital differentiations than skin-tone, noses, and eyes. Consider talent, personality, experience, spirituality, and above all, character!

We have been called to finish the work of God. But corruption is the elephant in the room. The world church is responsible to bring its supervisory muscle to bear when integrity is lacking.

Yet a strength beyond the Church Manual and the law of the land is necessary. Only the blood-stained principles of Christ will suffice. As individuals, and as a church, we face just one choice: will we be found exemplifying His blood or our own?

Knowing we became blood brothers and sisters at the cross offers an opportunity to rethink our prejudices. True servanthood—not being “respecters of persons” (Acts 10:34)—could save us a lot of trouble. The reason to correct the troubled trajectory is to stem the loss of souls that is occurring while some may be fattening themselves with unconverted priorities.

The solution may be but simple but difficult: “May we never boast except in the cross of our Lord Jesus Christ, through which the world has been crucified to us, and us to the world.” Galatians 6:14. When the meaning of foot-washing is lived out in the church, we confirm we are part of the remnant. Christ’s character will be our supreme identity. We will be dead to our own blood-sports.

We have been sent to save every nation, kindred, tongue and people, not just to elevate those we call “our own.” 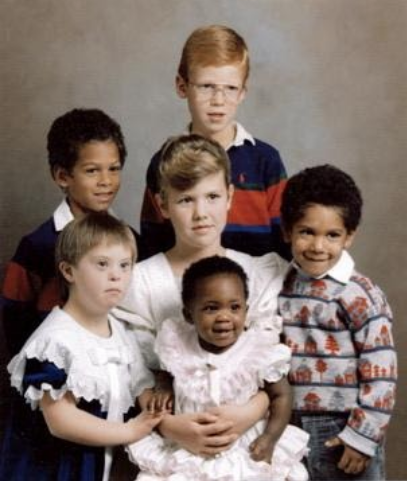 Rita (Schaffner) Corbett grew up on an African mission station and has continued to be involved in mission projects. Her husband, Grant, is an orthodontist, and they have 6 children (pictured at left), 4 of whom are adopted. Rita is very involved in her home church in Lake Williams, British Columbia, and teaches family health classes.

ATSS: Jim Walters on “Why We Need Religion”