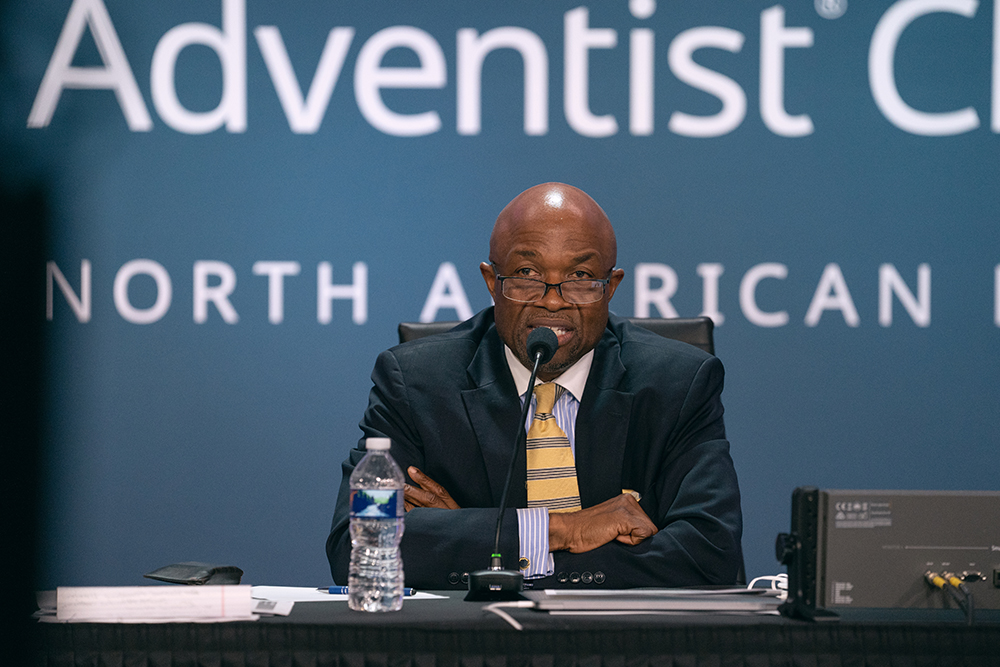 From the NAD – 29 April 2021 | Three vice presidents, two directors, an associate director, Liberty magazine editor, and the president of the Guam-Micronesia Mission have been newly elected to serve the North American Division (NAD) until 2025. The election on April 29, 2021, took place during a meeting of the NAD Executive Committee; the date was chosen by the same governing body through a vote on Feb. 25, 2021, after the postponement of the 2021 General Conference Session.

A total of 42 names were presented for election or re-election from the division’s nominating committee. Executive committee members could vote for or against the names, or refer the name(s) back to the nominating committee. Most positions voted were for incumbents; however, seven new leaders accepted the call to serve.

Right before executive committee members voted, Randy Robinson, NAD treasurer, offered prayer. “Father, this is a solemn moment where we are acting … as we consider these individuals for these positions, we pray for your Spirit’s movement in our hearts. And we pray for the will of God to be done. We thank you,” Robinson prayed.

Wendy Eberhardt was elected to serve as the NAD vice president for ministries, replacing Bonita J. Shields, who announced this spring that she would not seek re-election. Eberhart is the director of Young Adult Ministries and camp ministries for the Arizona Conference. She has also served in the Upper Columbia, Kentucky-Tennessee, and Pennsylvania conferences, primarily in the roles of camping leadership and youth ministries.

“She has a strong passion for mentoring, is highly spiritual, and has tremendous people skills. She has the desire to see people be the best they can be,” said G. Alexander Bryant, NAD president, when presenting her name to the executive committee.

Calvin Watkins Sr. was elected to become the NAD vice president for evangelism and regional liason. Alvin Kibble, who retired in 2020, served in this position as liaison to the regional conferences, in leadership development, and Public Affairs and Religious Liberty (PARL). Watkins is currently the president of the Southwest Regional Conference. He’d previously served the South Atlantic Conference as ministerial director and director of the conference’s Adventist Community Services.

“Calvin has baptized more than 6,000 people in his time as an evangelist,” said Bryant. “He is passionate about doing what he can to finish the work of the Lord.”

“He’s a facilitator and disciple-builder. He brings administrative strength to the role for collaboration,” said Bryant.

“She has a strong love of religious liberty and is very qualified to serve in this role,” said Bryant.

“DeeAnn comes highly recommended from many women’s ministries directors,” said Bryant. “She has coordinated many special events and retreats, and collaborates with the youth department to engage and empower teenagers.”

The newest director of NAD Adventist Community Services is W. Derrick Lea. Lea was previously its associate director serving as disaster response director, occupying that role since 2015. He was a fire chief before coming to the division.

“He has a rich history in disaster work, and a passion for serving the community,” said Bryant.

Rudy Salazar will be the new Stewardship Ministries associate director. Salazar comes from the Central California Conference as its director of Gift Planning Ministries and Stewardship.

“Rudy also has many years of experience in stewardship and trust work from times in Texas, Oregon, and California. He’s conducted camp meeting services in English and Spanish,” said Bryant.

Three positions have been referred to the NAD Administrative Committee (NADCOM), which meets throughout the year. These include the position of vice president of strategy and assessment, recently vacated by the retiring Paul Brantley; director for Sabbath School and Personal Ministries; and NAD ACS associate director.

The final position filled on April 29 was president of the Guam-Micronesia Mission (GMM). Its previous president, Ken Norton, recently became the president of the Montana Conference. The NAD executive committee elected Matthew Kirk, the current secretary/treasurer of the Montana Conference, to become the mission’s newest president. Remenster Jano, GMM secretary, and Donald Lloyd, treasurer, were both re-elected.

The executive committee also voted two additional actions to give special recognition to leaders who have retired and/or have accepted different roles.

— Mylon Medley is an assistant director of communication for the NAD; Kimberly Luste Maran contributed to this report.