I landed my first solo pastorate in the far southeastern corner of South Dakota.

There are few things that make Yankton, South Dakota, memorable. But there is one I enjoy telling Adventists about: it was in that district where a convert named Jasper Wayne, who owned a tree nursery business, began asking the public for money for Adventist mission work. Wayne lived across the river in Sioux City, Iowa, but it was near his nursery at Elk Point, South Dakota, where he started what would become Harvest Ingathering.

According to the story, Mr. Wayne went into the Elk Point post office in early December of 1903 to collect a package of 50 Signs of the Times he’d ordered. The post office was full of people, so he passed the magazines out right there. People asked “How much?” so he took donations, collecting $4 that he promised to turn in for mission and relief work. Ten days later he got another package of 50 Signs, which he hadn’t ordered. This puzzled Jasper, but his wife assured him it was God’s doing, so he again went out and gave the literature to businessmen and farmers and people on the street, and this time came home with $26 dollars, which he also sent to the Iowa Conference for missions.

Jasper began mostly with business contacts, and his success led to door-to-door solicitation by the whole church. According to Richard Schwartz in Lightbearers to the Remnant,

Some thought it a poor policy to “beg money from the Gentiles” to support Adventist work. But Wayne would not keep still. While attending the Nebraska camp meeting in 1904 he told his experience to many, including A. T. Robinson, the conference president. From personal experience in Africa and Australia, Robinson knew of the great needs of the mission fields. He persuaded Wayne to share his method with all the campers during a general meeting. W. C. White, in attendance, was captivated by the idea and arranged for Wayne to describe it to his mother, Ellen White. With her strong endorsement the program soon received official conference acceptance.

Some of Jasper Wayne’s biographers say that not only was he an enthusiastic fundraiser, but that he started Adventist sanitariums all over the Sioux City region with the support of community businesspeople. By the time I was there there were no sanitariums, and I never heard any memory of them from the remaining Adventists.

It may have started out with distributing literature and raising money for overseas relief work, but what made Harvest Ingathering a staple of Adventist life for almost a century afterwards was how much extra money it brought in.

And, ironically, that’s probably what killed it here in North America.

I began Harvest Ingathering as a Pathfinder in the vicinity of our tiny village of Cleveland, North Dakota. I hated it from the start. I remember being dropped off at a home that was just a basement dug into a hillside; inside the home was a filthy mother with four filthy children and several dogs. Even at 10 years old I was embarrassed: I knew we should be giving her money, not asking her for it.

Somewhere there’s a picture of me around 13 years old standing in the snow attempting to accompany a group of carolers on a piano-accordion. “Silent Night,” in the key of C, was the only carol I ever mastered. I’d like to find that picture.

I ingathered again as a Sheyenne River Academy student. I still hated it, though I hated it a little less the year I had a girlfriend who was my ingathering partner, and we would smooch when out of sight of the unfortunate North Dakota Conference pastor assigned to drive us around. 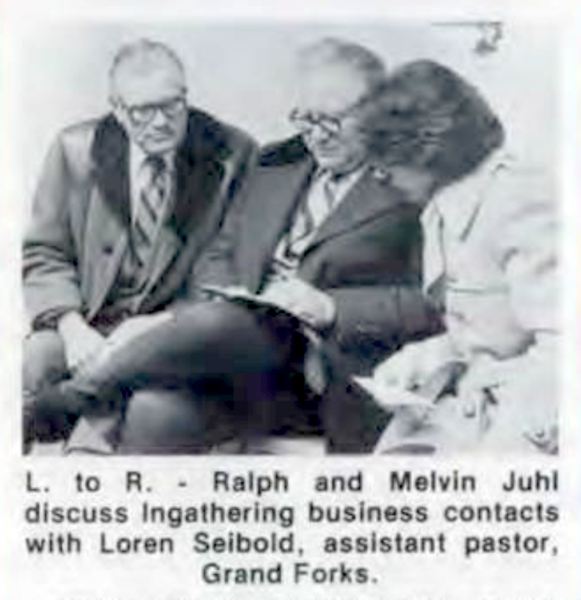 Some years later I became a pastor myself. After two rewarding years at the seminary, we arrived in the district that contained the village of Elk Point.

I received from my predecessor a notebook of business contacts. Starting in November I would hit the road, driving from one little village to another over a massive, largely empty territory, in most of which people had never heard of us. I would walk into a business and say, “It’s time for our annual campaign for missions and relief work.” I would watch the incipient grimace on the businessman’s face as he reached into his cash drawer and took out $5 to get rid of me. “But you’re witnessing,” my elders said. I could never figure out how, since people seemed to hate when we showed up.

In one area a layman would go with me to a couple of towns near his home, and that helped: he was a wealthy and respected farmer, so businesspeople felt obligated to both give and be friendly.

Sometimes I had the opposite experience, though. In one village, a man in an auto body repair shop asked me, “Hey, is R—– Z— a member of your church?” RZ was known for cheating people, not paying his bills, being a capital liar, and grabbing women’s bottoms. (Just for the record, he was orthodox in his Adventist beliefs: he would never have ingested the tiniest sliver of bacon.) “Yes,” I answered, reluctantly. “If he’s what you people are about,” he replied, “get the hell out of here. I want nothing to do with you.”

I hated Ingathering even more after that.

But some of my church members loved it. One retired woman volunteered year after year to lead the door-to-door campaign. She would show up in a soiled quilted anorak, gaudy stocking cap squashing down her hair, pants much too tight, and rubber overshoes—it was a striking get-up, which is why it is burned into my memory. She seemed blind to how people saw her—an admirable quality, I think, for someone who asks strangers for money. She plodded to doors with a strange enthusiasm, and giggled like a little girl. I wondered what people must have thought of us when she said she was from the Seventh-day Adventist Church.

Naturally the Ingathering team expected me to participate even after I’d spent weeks canvassing businesses. I remember my wife literally dragging me by the arm up to doors one year. “Come on, Loren! You’re the pastor! You have to do this!” The next year I withdrew a couple of hundred dollars from the bank, walked my territory passing out my booklets, and then filled the can with $25 in change and small bills. I spent the next 90 minutes in Dunkin’ Donuts. This became my practice from then on.

The team exclaimed over my success. I remained humble.

Yes, there was a dishonesty implied that I’m not proud of. But I was at the point where it was either that or quit ministry entirely—that’s how much I hated it.

When I started ministry, Harvest Ingathering was abusive to pastors. Since I was in the conference where it began—and anyway, in the midwest we were a decade or two behind the rest of the denomination, with an old-school president—this was still going on. Pastors and wives were required to attend a December “banquet” at which we would rise to our feet one by one and declare that we had reached the Ingathering goal the conference had set for us. If you hadn’t, you were publicly scolded. I remember those events as some of the most abysmal moments of my life.

Worse, if you didn’t reach your goal by Christmas, your travel plans could be canceled, even if you’d purchased plane tickets, because the conference president would inform you that you couldn’t leave until he had certified that you had your Ingathering goal in hand. I heard of pastors topping it up with their own money. I knew of a case where a kind layman completed the goal so the pastor’s family could go home for Christmas.

That was when I first realized that I’d unknowingly been lying to people when I showed them pictures of raggedy brown children and told them their entire donation went to relief work among the sick and starving in foreign lands. In fact ADRA got but little of it.

Reaching Ingathering goals was one of the requirements for earning ordination. When I was finally ordained and began getting calls, I took the call to California at least partially because the president, Charles Cook, said the church they were sending me to didn’t do Ingathering anymore.

Ingathering back then might have been thought of as a sort of hazing ritual for pastors, except it lasted for your whole career. It certainly wasn’t what I expected, when I studied all those years in college and seminary, to be the thing that would so dominate my work that I dreaded it all year.

Door-to-door work isn’t for everyone. It certainly wasn’t for me. But the world changed, too. People relaxing at home in the evening after all day at work resented strangers knocking on their doors. It turned into bad public relations: we were greeted with annoyance rather than courtesy. In a world where home was a refuge and privacy valued, few responded well to people selling them something at their door—especially religion.

Walking around to strangers’ homes at night seemed a security risk, both for the canvasser and the householder. More and more houses and apartments were behind locked security gates. Green River Ordinance laws spread. Businesses began giving to charity bundlers like the United Way so they wouldn’t have to deal with every separate request.

Yes, there could have been other ways of raising money: street ingathering or fund-raising projects, as still happens in some Scandinavian countries. Most Adventists love ADRA and are proud of its work, and might even be willing to ask others to support it.

But mostly, Harvest Ingathering died here in North America because of what church leaders did with it. It got to the point where Ingathering income was a necessary part of the conference budget. That’s why the intense pressure on pastors, and why pastors came to resent it so much. Their pride in the church and its work was diminished when year after year they were pushed into the degrading hog wallow of expanding goals and canceled vacations—especially once they learned that even though we constantly invoked ADRA, only a little of the money went there. I remember how hard it was for me to ask for money once I learned that my brochure (and my pitch) was a lie. Church members, too, learned where the money went (or didn’t), and they backed away.

So when the generation of pastors who had been pressured about Ingathering got into leadership, they shut it down.

Ingathering died here in North America because we let a selfish end—more money for the church—justify a questionably effective means. It is what happens when organizational survival overtakes mission. And it’s still happening today, in other ways. We are still massively over-supervised from the top, while small churches are dying by the hundreds. I believe that organizational survival is still shaping decisions that we will someday look back at with regret.

I never distributed Signs of the Times in the Elk Point post office as did Jasper Wayne—I doubt canvassing on federal property would even have been legal by then. I did write hundreds of articles for Signs of the Times, though, so perhaps I contributed some small bit to the bigger story after all. 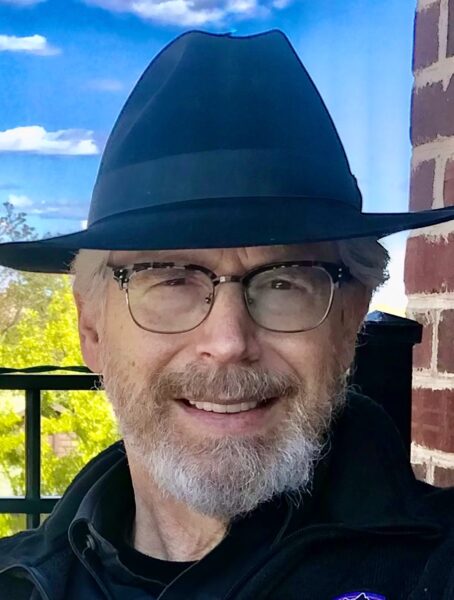