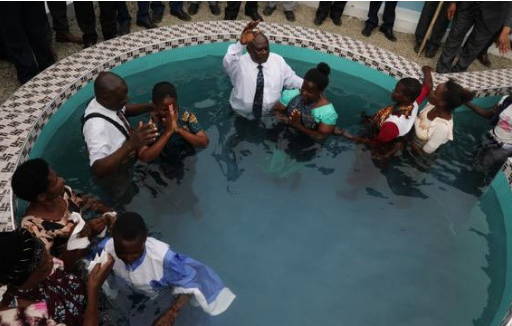 “Amani itokayo juu,” which means “Peace from Above” in Kiswahili (aka Swahili), tackled physical, mental, and spiritual human needs.

The message was broadcast live from the main site in Nyamongo, a city in northern Tanzania, on the border with Kenya. The signal was relayed to more than 4,000 sites across the country, and the event was simultaneously interpreted from Kiswahili into five languages: English, French, Portuguese, Arabic and sign language.

Some sites might have seemed a little strange: they included bars, restaurants, barbershops and prisons. Influential church members sought permission to install screens wherever they found crowds of people and made sure the signal was received.

In one village, nine family members invited their brother, who was a well-known witch, to watch the message. With the help of the local pastor, he decided to abandon witchcraft and joined the church to depend on God the Creator. The conversion of the man amazed the entire neighborhood, so much so that they started attending the meetings. At his baptism, he decided to release a hyena he had been using in his magic.

In one barbershop, a lady decided to be baptized after watching and digesting the good news about heavenly peace. The manager revealed the health message had touched his heart and he was ready to start eating healthy food and do physical exercise.

In the city of Mwanza, 120 prisoners who were watching on the screen expressed their pressing need to have Bibles. The following day, a lady watching through social media outside Tanzania offered them more than they needed. They continued watching and reading. They were eventually baptized.

The main speaker, Pastor Godwin Lekundayo, president of the North Tanzania Union Conference, explained that by choosing God, people attain sustainable peace. He expounded on freedom to choose and invited the people to make God their right choice because He is the only source of true peace. He reminded them that whenever God forgives sin, peace sets in.

Reiterating the importance of exploiting media strengths in evangelism, Pastor Mark Malekana, president of the Adventist Church in South Tanzania, stated that they have already witnessed its power and will always optimize it for people’s salvation. He asserted that the success of the campaign was a result of their determination to leverage media opportunities. He added that they mobilized church members to share the event with their neighbors and invite them to attend, either physically or virtually.

In order to prevent the loss of the new members, measures have been taken to nurture and integrate them into the new life. The communication and media departments have already designed a plan to work with the personal ministerial secretariat to incorporate every local church member in discipleship through sharing Bible studies and conducting home-to-home visitations.

At the closing ceremony, the government of Tanzania was represented by the Honorable Ally Hapi, the regional commissioner of Mara Region, where the meetings were taking place. After receiving a report about free health services that were offered to his community, he commended the Adventist Church for their holistic approach to mission. Calling them reliable partners, he invited them to join the government in the COVID-19 vaccination campaign and requested prayers for his government.

This report was edited by AToday staff.

(Photo: Forty thousand people were baptized as the result of three-week media evangelistic campaign in Tanzania. Photo via ANN.)