Good News for People with Issues 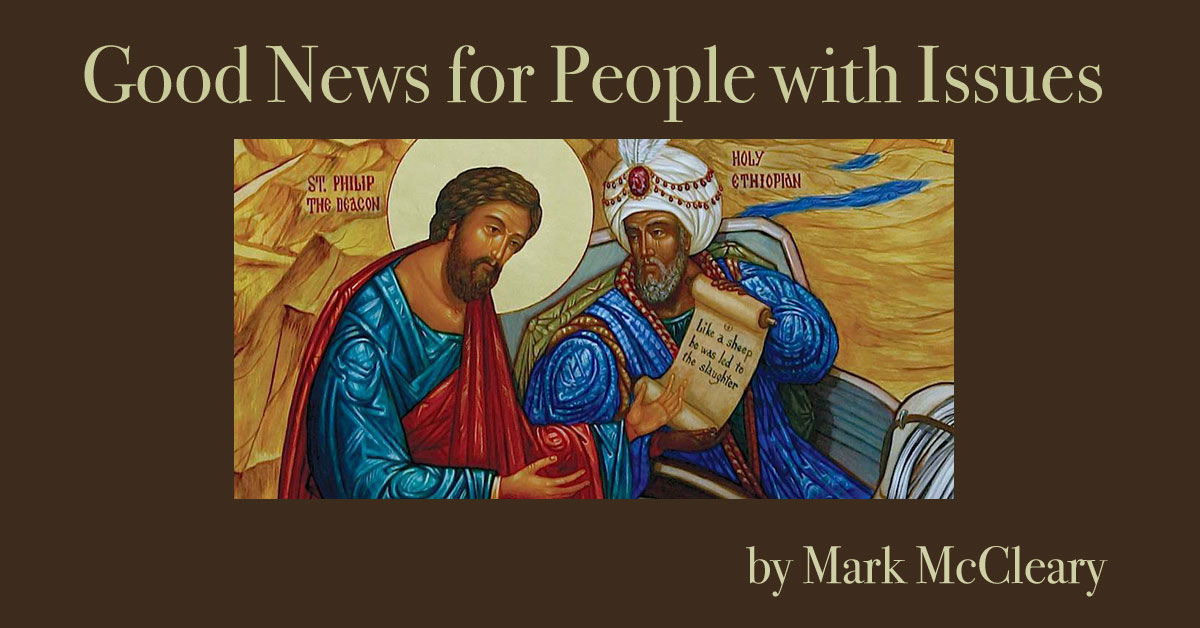 Articles like this are daily fare at Adventist Today. If you find this one inspiring, interesting, or thought provoking, we invite you to help us bring you more independent journalism by becoming a member at Adventist Today. There is an option that will fit most anyone’s ability and willingness to help. Thank you!
Subscribe to our FREE weekly email, Adventist Today Update. Every Friday it brings you a summary of our best work of the week!

You can read the narrative of the following biblical case study, human interest account, and docudrama in Acts 8:26-40. It is traditionally called the story of the Ethiopian eunuch.

The Apostle Paul asserts on two separate occasions that biblical stories are didactic and informative for learning how to live from the mistakes of others.

For whatsoever things were written aforetime were written for our learning, that we through patience and comfort of the scriptures might have hope (Romans 15:4).

Now all these things happened unto them for ensamples: and they are written for our admonition, upon whom the ends of the world are come (1Corinthian 10:11).

What is a Family?

If this were a treatise on the family, it would probably describe the idea of family as being about blood, economics, identity, religious faith and values. It might also admit that biology is not its sole determinant. Natural and manmade disasters have created broader parameters for family. Fundamentally, a family member is anyone joined to a group of people: ethnic, religious, political, civic, and so on. This broader and liberal notion of family threatens our myopic and exclusive perspectives on social group relations.

The Old Testament revelations about family were tested by the New Testament phenomenon of the church—the “ecclesia,” or “the called-out ones.” This latter group was heterogenous: one big extended family who ate together and shared resources. God’s redemptive project was being realized in time and space, transcending traditional family bonds of flesh and blood and birth certificates. (Do you think the American political “birthers” would have a problem with this?)

In this concept of the church as extended family we begin to understand the backdrop for the early church’s internal tension around women whose husbands were dead, and were embracing “the Way” as their new family. In Acts 6 bickering began during the food distribution ministry over the issue of food access for widows.

On the way to our main story we meet two devout men: deacons Stephen and Philip. These two children of God were empowered to give voice and impact in this diverse movement. Recall or read the entire account that climaxed in this response from the apostle: “It is not right that we should neglect the word of God to serve tables” (Acts 6:2). Frank Stagg (1955) provides some timeless insight about this response when he asserts, “It is ironic that those who were too busy with spiritual matters to serve tables failed to provide the designed insight of the gospel.”

Come here Micah, and help Mr. Stagg refocus our attention on the real priority of the gospel: people and family are more important than studying seven days for Sabbath or Sunday School, or knowing the salient aspects of our 28 Fundamental Beliefs.

He hath shewed thee, O man, what is good; And what doth the Lord require of thee, but to do justly, and to love mercy, and to walk humbly with thy God? (Micah 6:8)

Philip and the Eunuch

Later we find Philip traveling “by the Spirit” (Acts 8:26) toward Gaza. An Ethiopian eunuch, a financial officer serving the Ethiopian queen, was also traveling that desert road at the same time. “Ethiopia” means “burnt face” and is a Greek term for the regions of Cush or Nubia in Africa—in Arabic, “Alkebulan”, the land of the blacks. It refers to the northeast and central areas of Africa. This Ethiopian official was a black believer returning home.

The passage identifies the location (Gaza desert), names Philip and the Ethiopian queen (Candace), but describes the nameless actor as an Ethiopian, a eunuch and a fiscal officer. A eunuch was missing his genitals, and probably had been a slave who had been a ruler’s overseer of his female harem (Esther 2:3,14,15). Eunuchs were disdained as deformed and worthless. The Torah proscribes a eunuch from entering the temple (Deuteronomy 23:1). It is serendipitous that this eunich was reading from the Tanakh in in the book of Isaiah (Acts 8:32,33),

He was oppressed, and he was afflicted, yet he opened not his mouth: He is brought as a lamb to the slaughter, and as a sheep before her shearers is dumb, so he openeth not his mouth. He was taken from prison and from judgment: and who shall declare his generation? For he was cut off out of the land of the living: for the transgression of my people was he stricken (Isaiah 53:7,8).

Wow! Lambs have their wool cut off, and this man had his genitalia cut off. He was humiliated and marginalized, even while an important official to his government, and a believer in Yahweh. He is returning home from worshiping at the Jerusalem temple.

God had choreographed this scenario by positioning the eunuch so he could be heard reading by Philip. As he read this Messianic scripture, he asked, “Who is this talking about?” After Philip provided his Christological explanation, the eunuch asked, “What is to prevent me from being baptized?” (Acts 8:36). He wanted to be in the Messiah’s family.

It is no nominal observation that only three chapters after Isaiah 53 are the verses of Isaiah 56:3-5.

Neither let the son of the stranger, that hath joined himself to the Lord, speak, saying, The Lord hath utterly separated me from his people: neither let the eunuch say, behold, I am a dry tree. For thus saith the Lord unto the eunuchs that keep my Sabbaths, and choose the things that please me, and take hold of my covenant; even unto them will I give in mine house and within my walls a place and a name better than of sons and of daughters: I will give them an everlasting name, that shall not be cut off.

Philip was sent by the Spirit to help this “outsider” know he was no longer excluded from the household of God. Sadly, contemporary church functions are influenced by cultural limitations per biology, marriage, or other social-political attachments. This account interprets family as something beyond traditional definitions. It sees family as God’s making wholeness out of brokenness and exclusion. In Christ, eunuchs and others become new creatures with new and brighter destinies of inclusion and eternal value.

The perfection that many promote is not grounded in Biblical exegesis. Matthew 5:43-48’s exhortation to “be perfect” is not a requirement for flawless morality, or even gradual character development rooted in a work-ethic. It is an appeal to love whomever without discrimination (Garland, 2007). Biblical perfection is less about attaining sinlessness and more about submitting to and thanking God for His redemptive work in and through us by Jesus Christ (1Corinthians 1:29-31).

The Bible stories are didactic. They are case studies, human-interest accounts, and docudramas of real people, in time and space, that God encountered and restored from brokenness and problematic issues to Kingdom citizenship.  The story of the Ethiopian eunuch is such a story. Like Paul, you, and me, God’s promise of restoration and inclusion reverberates: “My grace is sufficient for you, for My power is made perfect in your weakness” (2 Corinthians 12:9).

This, then, is another episode of Good News lifting individuals like Philip, the eunuch, like you and I, so we are no longer defined by our brokenness, but by our inclusion in the family of the redeemed.

In the film The Wiz, Eveline exclaims, “Don’t nobody bring me no bad news!” Why focus on bad news, when there’s Good News for flawed people with issues? Why settle for bad news that does not foster hope and  help? Here instead we make this joyful confession: “Thank you Lord for remembering me today on my way back home”!