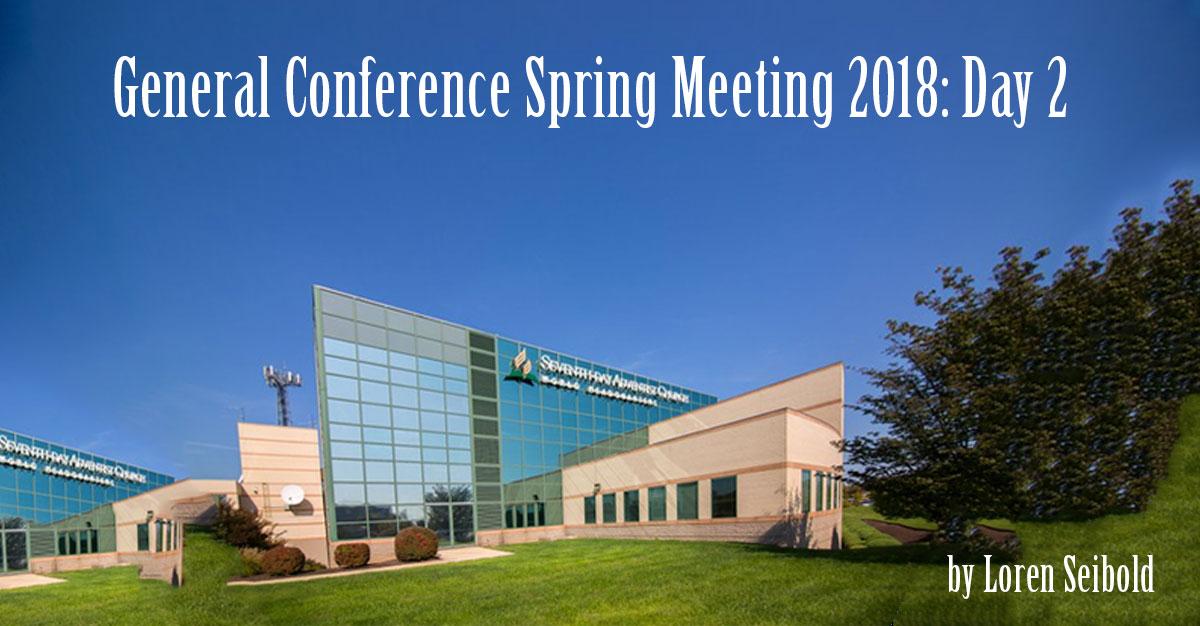 Half day only, today, so my report is short.

One of the reasons I wanted to attend this year was the promise that there would be discussion about investing in (or divesting of) companies that manufacture weapons and armaments from the GC portfolio. I am glad for the decision that the brethren made just before the conference, but I would have liked to have heard some discussion about how they came to their decision, how it will be implemented, how our traditional non-combatancy position shaped their decision, and our leaders’ attitude generally toward our weaponized culture.

It did not come up.

“Every wind of doctrine” (Ephesians 4:14) is blowing in the church today, says Mark, from the ultra left to the ultra right. Five winds that Mark sees blowing:

When I was young many Adventists spent summers canvassing—selling our books door to door. (I didn’t, because I had to work on a family farm if I were to go to college in the winter.) Now those programs aren’t what they once were in the United States. They’re still very active in many countries, though. 30 million people is the potential audience of the current “LE Army”, says the GC publishing leader, Almir Marroni. They claim LEs are responsible for 70,000 baptisms! Nice work.

The Third Global Conference on Lifestyle and Health

July 9-13, 2019, Loma Linda, CA. The theme is on lifestyle and how it affects the body and the brain: wholistic wellness. “We will explore the way lifestyle interventions modify our total well-being through the cycles of life.”

I must tell you honestly that I get confused by all the titles of organizations and sub-organizations in the GC. What is Mission Advance as distinct from all the other world mission organizations? Does anyone outside of the building care? This presentation was enthusiastic, but fairly standard, cheerleading about Adventist missions and youth and publishing, presented by Guillermo E. Biaggi and Geoffrey G. Mbwana with lots of Ellen White quotations.

New Sharing Book of the Year

Hope for Today’s Families, by Willie and Elaine Oliver. I got a copy and it is very nice, a good solid giveaway book. A book about happier families is better than giving away a bunch of scary prophetic speculation, don’t you think? Recommended.

I’m always interested in how we’ll reach back to the 19th century for very specific methodologies, like this one quoted by Elder Biaggi: “I have been shown that few have any correct idea of what the distribution of papers and tracts is doing. The missionary work, in circulating the publications upon present truth, is opening doors everywhere, and preparing minds to receive the truth, when the living preacher shall come among them. The success which attends the efforts of ministers in the field is not due alone to their efforts, but in a great degree to the influence of the reading matter which has enlightened the minds of the people and removed prejudice. Thus many are made susceptible to the influence of the truth when it is presented before them” (Ellen G. White, The Publishing Ministry, p. 398).

We quote this while, as you know, our publishing houses here in the United States are closing, people aren’t reading and buying books as they once did, and we’re sending tons of unwanted pulp paper Great Controversies to fill the dumpsters of whole cities.

That’s why I was pleased by a very pleasant interview that Mark had with two young men, Pastor Jamey Houghton and a businessman, Paul (whose last name I didn’t get) about how Mark is learning about social networking. He had a contest with Paul, where Mark gives Paul $500 for advertising an evangelistic event using social networking, and Mark spends $5000 on mailing, and Paul gets more responses every time!

This can’t be but good news, and I’m proud of Mark for taking it on. Rather than explaining it all to you, I encourage you to watch this bit on youTube. Innovation has been a dirty word in the church, and one Conference president almost got pushed out for suggesting it. Perhaps that is changing.

The last bit of innovation today bothered me a bit more. Neil Nedley, an Adventist physician whom you may have heard of, talked about Weimar Institute of Health and Weimar Lifestyle Center. Nedley believes in curing depression by lifestyle and prayer—and having had a bit of pastoral experience with depression, that concerns me. You don’t overcome major depression (or any other mental illness) by becoming a vegetarian and several miles on the stationary bicycle, But I’ll let you make your own decision.  This man is an expert on everything—he also has some strong opinions on fixing gay people—and is a favorite of Elder Ted Wilson; he shows up at nearly every GC meeting, sometimes for extended presentations.

Finally, take a look at this program for providing emergency medical care for refugees in Iraq. Currently there are 3,065,112 displaced inside Iraq and 1,251,147 displaced in temporary settlements. It is, by the way, a program where you can volunteer, and probably should.