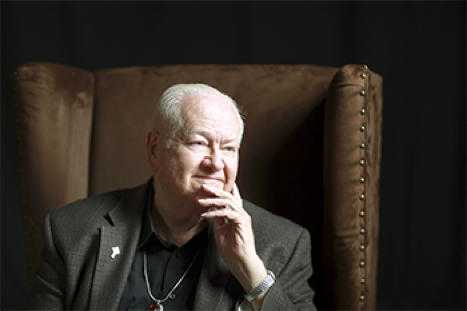 Dr. Leland R. Kaiser passed peacefully early on January 4, “surrounded by hearts full of appreciation and love,” wrote son, Kevin Kaiser, in an email announcement. Leland was known variously as a healthcare futurist, visionary, mentor, executive coach, community organizer and much more. He was a senior fellow at the Estes Park Institute in Health Futures and Spirituality.

Kaiser’s connections to the Adventist community went well beyond his membership in the Brighton, Colorado, church where he taught an adult Sabbath School class for decades. He held to a deep conviction that the Adventist faith and Adventist mission had something distinct to offer to our world. To that end, he was invested in challenging, guiding, counseling, and coaching church leaders who held a similar vision for Adventism. His futuristic views sometimes earned the inevitable disparagement of his detractors. But Kaiser remained consistent in advocating for a church that embodies the vital, dynamic, and creative nature of the Holy Spirit which activated us in the early years of the Advent movement.

My introduction to Dr. Kaiser was at a retreat for leaders in the Columbia Union Conference in the early 1990s. He caught my attention by his courage to swim against conventional thought and to candidly express himself in his own inimitable ways. In 2004, I and a few other leaders from the Ohio Conference had the privilege of benefiting from an hours-long conversation with Leland. We left that encounter encouraged, optimistic, and hopeful about the possibility of meaningful positive change in the church.

That encounter also catalyzed a national event that we hosted for nine consecutive years. The National Conference on Innovation drew 150 to 200 attendees annually from all parts of North America, Europe and Australia. The Kaiser family, by its involvement in the first two annual events, placed the conference on a trajectory that ensured its continued success. This was just one of hundreds of initiatives and movements that Leland inspired and energized in education, healthcare, community and church.

My meeting notes from our 2004 conversation with Leland include the following quotes, each with comprehensive explanations and insights:

“The future is simply infinite possibility waiting to happen.”

“We cannot have what we cannot imagine.”

“To create a preferred future, you must first envision it.”

“Changing your mind changes your future.”

“Problems generated by a paradigm cannot be solved from within that paradigm.”

“We create boundaries when we want to avoid responsibility.”

“Visionary is a self-fulfilling prophet. Don’t predict the future. Create it.”

“If you hold the intention, you’ve given God the permission to intervene.”

“A change of world view changes the world viewed.”

As a pioneer in many areas of healthcare and education, Leland Kaiser leaves a legacy in innovation, leadership and philanthropy. I will remember Dr. Kaiser for his kind, accepting, encouraging, supportive, and empowering ways.

Dr. Raj Attiken is an adjunct professor of religion at Kettering College, the Adventist higher education institution in Dayton, Ohio, and former president of the denomination’s Ohio Conference. He often writes for Adventist Today.