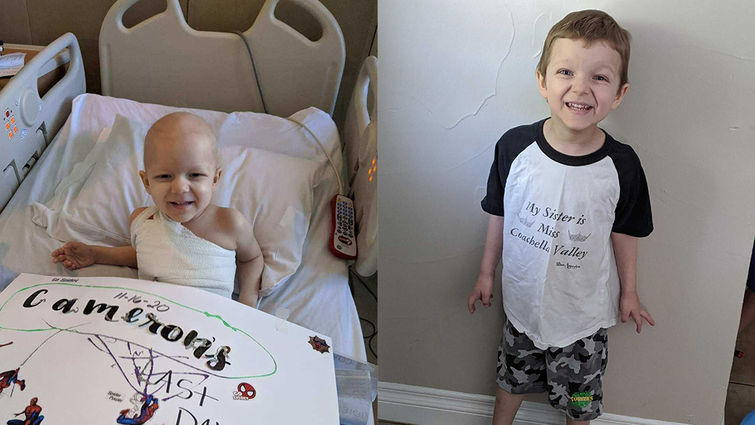 29 September 2021 | Four-year-old Cameron Bryant began vomiting without cause in February 2020. His pediatrician wasn’t able to identify the issue. Cameron became dehydrated and was not able to focus his eyes, said his mom, Alyssia Parks-Bryant. Cameron was taken to Loma Linda University Children’s Hospital in June 2020. After a CT scan, Cameron’s family was told the scan had shown a mass. He had medulloblastoma, a tumor located in his brain

“I didn’t hear anything after that,” Parks-Bryant said to Loma Linda University Health News. “I was in shock! When neurology came to take him to the pediatric intensive care unit, I was terrified they were taking him somewhere to die. I kept saying, ‘No, he’s not dying, he[’s] fine,’” she recalled.

Richard Robison, MD, a Children’s Hospital pediatric neurosurgeon, performed a craniotomy (removed a portion of Cameron’s skull) to remove the tumor from the posterior fossa area of the brain. The posterior fossa is found near the brainstem and the cerebellum. Removing tumors in this area can damage brain tissue, causing posterior fossa syndrome in 1 out of 4 children. This syndrome includes problems with speech, emotions, movement, and other behaviors.

“Cameron had none of that,” Parks-Bryant says. “With Dr. Robison’s skilled hands, the Lord provided a perfect surgery, and the entire tumor was removed.”

Cameron’s tumor was classified as high-risk, and he was transferred to the oncology ward which would become his home for the next six months. Cameron started chemotherapy. After his rounds of chemo, an MRI scan showed no substantial growth of cancer. He then had an autologous stem cell transplant procedure done, where healthy stem cells collected from his body and stored before his chemo were put back into his body to replace the diseased and damaged stem cells.

By December 2020, Cameron was able to ring the bell in the Children’s Hospital oncology ward, which heralded the end of his cancer treatment.

“That was a wonderful day,” Parks-Bryant said. “His MRI scans at one month, three months, and six months post-treatment have been clear.”

Parks-Bryant said she learned important lessons from this experience. “There is only so much you can handle,” she said. “If you’re focusing on just getting through each breath and the breath of your child who’s being treated, take the help that people are offering—from child care assistance, grocery assistance, to bringing you a meal. Focus on getting through things one minute at a time.”