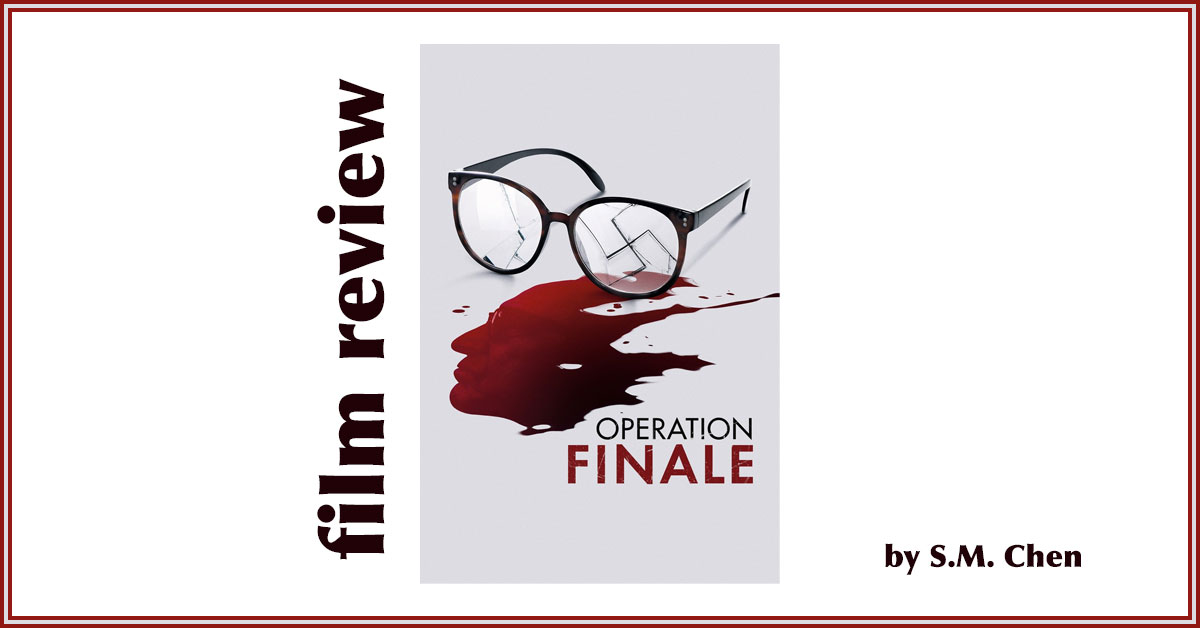 “The arc of the moral universe is long, but it bends toward justice.”
Martin Luther King, Jr. (1929-1968), quoting 19th century clergyman Theodore Parker

Certain events are so horrific, they deserve to be burnished in memory. And resurrected from time to time to remind younger generations. For, as Spanish philosopher George Santayana said, those who do not remember the past are condemned to repeat it.

One such monstrous atrocity was the extermination of close to 6 million Jews during WWII.

Now comes a film telling the story of the aftermath of a significant participant in what has been termed The Final Solution.

Warning: spoiler alert!  If you intend to view the film, you may wish to do so before reading further.  This review may tell more than you want to know.

When they saw the war was lost, some of the main architects of that horrific plan—Hitler, Goering, Goebbels—committed suicide.

One who did not was Adolf Eichmann. Mastermind of transportation logistics that brought millions of innocent Jews death in concentration camps, he, along with other Nazis, fled to South America and assumed a new name and identity.

Since the outcome of the quest to bring Eichmann to justice is a matter of history, this documentary film suffers an inherent potential disadvantage. Yet it managed to maintain a taut grip on the viewer—at least this one.  The strings on this cinematic instrument have been wound to a near-pitch perfect tension.

Before the assembled (by Mossad) Israeli team departs for Buenos Aires, they are visited by silver-maned Prime Minister David Ben-Gurion, who, with gravitas, tells them the sobering consequence of failing the mission to capture Eichmann. “Please do not fail,” he begs.

Ben Kingsley may be the only actor in the film with whom most viewers are familiar. He brings credibility to the man beneath whose exterior lurked a monster.

As expected, when captured, he denied being the infamous Nazi.  His name is Ricardo Klement, and he is someone other than Eichmann entirely.

How he was tricked into admitting his true identity is but one of several cinematic delights the film offers.

The Israeli team justifiably detested Eichmann and would have preferred, upon capture, terminating him with extreme prejudice, but they had accepted the modus operandi of Mossad: after capture, their mission was to transport him to Israeli to stand trial.

Civility, if not kindness, was de rigueur.  This might have worked in Eichmann’s favor; he knew that, once captured, he would not be tortured or harmed.  As time passed, he allowed Peter Malkin, the man who captured him, to shave him with a blade from Solingen (where Eichmann was also from).  The razor slid so close to the great blood vessels in his neck.  How easy it would have been for Peter’s hand to slip…

Yet, ultimately and perhaps ironically, kindness was the undoing of Eichmann. The Israeli team badly needed him to execute a document (stating he was traveling to Israel of his own accord) to permit them to fly El-Al to Tel Aviv. They did not want to risk forging his signature, and could not threaten him. What to do?

Peter assures the others he will get the document signed, and does. Near film’s end the promise he makes to Eichmann in exchange for the signature is kept.

Malkin assures Eichmann he will get a fair trial in Israel. But that is not the promise. It is something else.

The ways of the Israelis and those of the ex-Nazi émigrés who live in Argentina differ. The latter have no compunction about torture, and, when they capture the Argentine maid who has been buying groceries for the Israelis with American dollars, they string her up and apply lit cigarettes to delicate parts of her body.

As expected, she breaks, and reveals the whereabouts of the safe house to Klaus, Eichmann’s son, who has been assiduously searching for his father ever since his disappearance and presumed kidnapping.

Eichmann’s base nature is revealed as he is about to be sedated for the exit from the safe house. He begins to speak of the death of one of the children of Peter’s sister, Fruma, who, along with her 3 children, was killed by the Nazis.

Fruma, standing in a long trench along with some 5000 other Jews, is about to be shot. Pleadingly, she holds her son up for Eichmann to see and possibly rescue.  Instead, the boy is shot from such close range, his brains splatter onto Eichmann, who coolly brushes them off as if they were dandruff. Eichmann describes the event loudly, rapidly, and with provocation.

That the swastika and what it symbolized were not dead was substantiated by a scene wherein Klaus Eichmann, a nice looking blonde lad, takes Sylvia Hermann, whose father is blind, to a meeting of ex-Nazi émigrés.  She cannot bear the anti-Semitic rhetoric and leaves, therein embarrassing Klaus. He did not know Sylvia was a Jew.

Later, after she has spontaneously visited his home, to verify for herself (and collaborating Israelis) that Eichmann really lives there, Sylvia asks Klaus, whom she has been dating, if it would matter if she were Jewish. He does not answer.

Later, Klaus hoists a flag bearing the swastika above the roof of his house. The apple does not fall far from the tree.

The Israelis race against time to get a drugged Eichmann out of the country. The Germans (along with sympathetic Argentinean police) are hot on their heels.

In an act of nobility, Peter, knowing their pursuers are near, and unable to make it back to the departing aircraft from the airport terminal in time, orders the plane to take off.

He remains in the terminal as the craft bearing his friends and Eichmann takes to the skies and disappears into the night, bound for Tel Aviv.

He does not know what will happen to him. But it doesn’t matter. He has accomplished what he set out to do. He has not failed Ben-Gurion.

In a subsequent very public trial, Eichmann was tried and found guilty. He went to the gallows protesting his innocence or, if he were guilty, he was no more so than countless other small cogs in the large wheel of the Third Reich.  But murder is murder, and must never be conflated with patriotism.

Contrast his end with that of Sidney Carton, a protagonist of ‘Tale of Two Cities,’ by Charles Dickens. On the verge of going to the guillotine for someone else, the innocent Carton declares, ‘It is a far, far better thing that I do, than I have ever done.’

Or, better, contrast Eichmann’s end with that of another Man almost two millennia ago, who, like Atlas, bore the weight of the world on His shoulders. Straddling the limbus between heaven and earth and about to succumb, that Man, speaking of His enemies, cried out, “Forgive them, for they know not what they do.”

Love will ever eclipse hate.