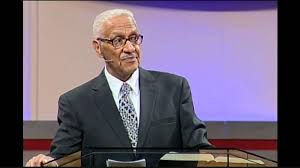 June 5, 2016:    Pastor Charles D. Brooks, founding speaker for the Breath of Life television ministry and one of the most famous Adventist evangelists in the history of the denomination, died this morning after being diagnosed with pancreatic cancer earlier this year. His ministry produced tens of thousands of converts, at least 15 congregations planted in American cities and hundreds of recorded sermons cherished by believers around the world.

Born in 1930 into a Methodist family, Brooks was raised in rural North Carolina and joined the Adventist Church with his mother and six sisters at ten years of age. He planned to get an education as a dentist when at age 16 he heard E. E. Cleveland, another famous Adventist evangelist, preach in tent meetings in Greensboro and had a revelation in which he heard God call him to the same kind of ministry.

Brooks was part of what Adventist historian Benjamin Baker calls “the fabled class of 1951” at Oakwood University, along with a number of other African American leaders who became well known in the denomination. He was hired by the Allegheny Conference, one of the five original Regional Conferences in the denomination’s North American Division, and spent the summer as an intern in an evangelism campaign in Uniontown, Pennsylvania. He served as pastor for local churches in Wilmington (Delaware), Chester (Pennsylvania), Camden, Bridgeton, Jericho, Salem (New Jersey), Columbus and Cleveland (Ohio).

In 1963, Brooks was called to become part of the staff of the Columbia Union Conference by Pastor Neal Wilson, the president at the time. In 1971, he was appointed a field secretary of the denomination’s General Conference and the following year had more than 500 baptisms during a campaign in Jamaica. He eventually preached in evangelism events on every continent except Antarctica.

Brooks was convinced in 1974 by Walter Arties to become the speaker for a new television ministry called Breath of Life. It targeted African Americans and the Caribbean islands, utilizing a strategy that focused on planting new congregations after months of television broadcasting and public meetings in a city. In 1989 the program began to be distributed regularly by Black Entertainment Television (BET) cable network.

In 1997, Brooks retired from the Breath of Life ministry and by that time it was successful enough to put him in a league with Adventist media pioneers H. M. S. Richards, William Fagal and George Vandeman. A year earlier he had retired from his position with the GC after a heart attack in June 1995.

One of the most well-known Adventists in the United States, Brooks spoke at the inaugural celebration of President Ronald Reagan. In 1994, he was inducted into the prestigious, interdenominational Martin Luther King Board of Preachers and Collegium of Scholars at Morehouse College in Atlanta.

In 2007, Brooks was honored along with two other noted Adventist ministers by the formation of the Bradford-Cleveland-Brooks Leadership Center at Oakwood University. In 2013, he was appointed chaplain of the denomination’s North American Division, and continued to preach regularly until last year. Also in 2013, a biography was published entitled C. D.: The Man Behind the Message.

Brooks is survived by his beloved wife of almost 64 years, Walterene (Wagner) Brooks; his children Diedre and Charles “Skip” Jr.; and three grandchildren. His funeral will most likely be held in the Oakwood University Church in Huntsville, Alabama, sources have told Adventist Today, although no official announcement has been made at this time.

Update:    The funeral was actually conducted at Sligo Church in Takoma Park, Maryland.