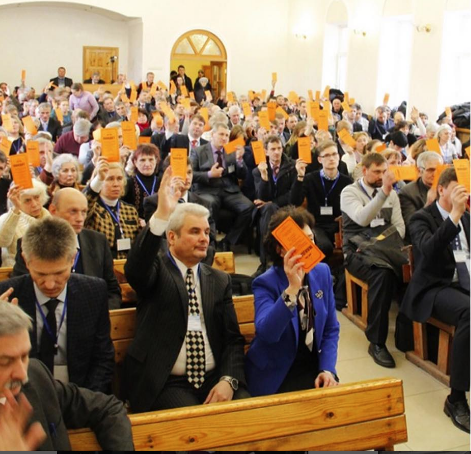 25 February 2022 | “Today, more than ever, we need God’s mercy and His protection. The winds of tension and opposition rush into our lives and turn our eyes to God as the Rock of our hope,” said a statement on the Euro-Asia Division (ESD) website posted on Feb. 24, 2022.

The ESD includes the country of Ukraine in its territory, and by mid-afternoon on Thursday, Feb. 24, 2022, Ukrainian authorities said Russia had carried out 203 attacks and that fighting was raging across almost the entire territory, according to the Guardian.


In a video address just after midnight, Ukraine’s president, Volodymyr Zelenskiy, said that 137 had died so far in the invasion, and 316 had been wounded.

According to Ukrainian officials, the initial wave of strikes appeared to involve cruise missiles, artillery and airstrikes which struck military infrastructure and border positions, including airbases.

Zelenskiy responded to the invasion by declaring martial law and saying Kyiv, the capital of Ukraine, would issue weapons to every Ukrainian who wanted to defend their country. He also banned Ukrainian men aged 18-60 from leaving the country after the invasion.

“We make an urgent appeal to you on Saturday, Feb. 26, 2022, and March 5, 2022, to unite in fasting and prayer for God’s intervention and stopping the bloodshed, for the reign of peace and the extension of the time of grace for the unhindered preaching of the Gospel in the territory of the ESD,” said the ESD statement.

German security experts said that Russia’s invasion not only threatens the sovereignty of Ukraine, but has undermined the entire geopolitical order, with European countries once again, as in the Cold War, potentially becoming more and more dependent on the United States to guarantee defense, reported the Deutsche Welle (DW).

Russia’s invasion also could have ripple effects across the world. With China claiming sovereignty over Taiwan and vowing to seize it one day—using force if necessary—fears exist that if the Russian invasion is successful, China may feel emboldened to take over the self-ruled democratic island, according to the DW.

The US, the EU, Japan and the UK have unveiled a range of economic and financial sanctions against Russia, but the sanctions are likely to have little more than a minimal effect, reported the DW. Russia’s big state-run banks were not included in the sanctions, and almost all the banks targeted were relatively small lenders.

Zelenskiy said he was disheartened after speaking to Western leaders, reported the Guardian.

“I see no one” to fight alongside Ukraine, he said.

For weeks, there had been speculation of a Russian invasion, according to reports.

On the Ukrainian Union Conference website, a post titled “War Is on the Threshold” said many schools were already working on evacuation plans, bomb routes, rapid response skills, home care training and even shooting skills for high school students.

The article included tips for parents and children, such as developing two safety plans, one for school and one for the home. The article advised putting a copy of the home safety plan, a favorite toy, a bottle of water and possibly a family photo in a school bag. The author was against writing down the home address, so attackers would not be able to use this information.

According to the Adventist Yearbook, the Ukrainian Union Conference has 784 churches, with a membership of 43,307 out of a population of 41,397,000.

It is also home to the Ukrainian Adventist Center of Higher Education, a medical center, a publishing house, a Media Center and the Hope-Ukraine TV Channel.

The Instagram account for the Hope-Ukraine TV channel mentioned a hotline people can call with requests and concerns: 0800-30-20-20. People also can join a prayer chain through that number.