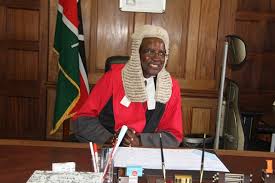 By Tysan, August 20, 2017:      The opposition National Super Alliance (NASA) coalition filed a case Friday evening (August 18) against the re-election of President Uhuru Kenyatta, claiming the recent national election was rigged. Media around the globe has been covering the August 8 election in Kenya because of the political violence in the African country in 2007 and 2008.

The litigation has been filed with the Supreme Court where the chief justice is David Maraga, a member of the Seventh-day Adventist Church. Election Day went well as Kenyans came together to cast their votes and create a new, peaceful nation, some getting up at midnight to make sure they cast their votes. Many leaders, such as the top officers of the Adventist denomination, had urged Kenyans to remain peaceful and not allow election tensions to escalate to violence.

The Independent Electoral and Boundary Commission (IEBC) runs elections in Kenya, and it took precautions to safeguard the ballots with representatives all over the country. The results of the voting for president were to be announced only by IEBC chairman Wafula Chebukati and IEBC chief executive officer Ezra Chiloba together. Chiloba also happens to be a member of the Adventist Church.

The positions up for vote in this election included members of parliament (MP), including seats reserved for women MPs; Senators, state governors and the President of the country. The presidency has raised the most concern, despite some violence which was quickly stopped by police, although some lives were lost and many injured.

Soon after the voting ended, Kenyatta was declared the winner with Odinga trailing by almost 2 million votes and other candidates getting less than ten percent of the vote.

The results are now in the Supreme Court which has 14 days from August 11 to review the case. According to Kenya’s constitution, a petition contesting election results must be filed within 7 days from the time the IEBC announced the results. The NASA petition was filed only hours before the deadline, and the NASA lawyer explained that it “had been buying time so that they could petition a water tight case.” NASA also had to deposit KSh 1 million as “security for cost” before they could file the petition and pay a further KSh 500,000 as court costs.

Odinga and NASA now have a tough battle to prove to the Supreme Court that there was malpractice in the election. Their lawyers went in fully armed with 20,000 pages of evidence.

Adventist Today has sent a reporter to Kenya to cover this story and to get interviews with a number of Adventists who were candidates for parliament and state governor positions.

President Kenyatta, who is the respondent in the case, will have two options after being served by NASA. He could either file a response (Form B) or might choose to ignore the case completely and not respond (Form C). Odinga’s petition against Kenyata’s win is very weak, says senior lawyer Ahmed Nassir. From the moment trial starts, hearings will take place on a daily basis without any interruptions. The hearings may only cease when the court makes a decision.

Soon after the Supreme Court accepted the petition, President Kenyatta broke his silence on the topic. He hailed Odinga for taking that route instead of the violent protests which were expected by many. “We are glad that Honorable Raila Odinga and NASA have chosen to file a petition in the Supreme Court. They have made it clear that they are dissatisfied with the results announced by the IEBC. The proper place to contest the IEBC’s findings is in the court of law designated by the constitution to handle that process, which has the power to call for evidence, and to issue a binding verdict,” the President said through his spokesman Manoah Esipisu. He also urged Kenyans to maintain peace and order and focus on developing the nation.

Adventist Today has learned that another petition was filed by a petitioner known as Juma Kenyatta-Awori Marie, who also challenged the presidential voting results. However, the Supreme Court has rejected that petition after it established that the documents did not clearly address issues related to the election.

Adventist Today has learned that the NASA petition will be heard and decided by a seven-judge Supreme Court panel presided over by Maraga within the 14-day window specified by law. The other judges on the panel include Deputy Chief Justice Philomena Mwilu, Justices Mohammed Ibrahim, Jacktone Ojwang, Smokin Wanjala, Njoki Ndungu and Isaac Lenaola.

NASA claims they have electronic evidence showing how slain IBEC ICT manager Chris Msando’s allegedly stolen credentials were used to rig the election. Just after NASA had filed the case, another presidential aspirant, Ekuru Aukot welcomed the challenge to the election results and pointed out some loopholes in the voting transmission software. He however maintains that he was not joining the NASA case. He also expressed his dissatisfaction in the fact that the international election observers had given the entire electoral process a clean bill of health.

In an August 15 tweet, Aukot revealed that his team’s audit report had unmasked “a worrying trend and something … fundamentally wrong.” He has no affiliations to NASA whatsoever, but he welcomed the court move by NASA to challenge the credibility of the election results. “If given an opportunity, we as the Third Way Alliance would wish to join in the case,” he said during a morning show on KTN television on Friday.

The Adventist lawyer Maraga, now Chief Justice of his country’s Supreme Court, has a lot to do and we at Adventist Today can only wish him well in this delicate matter that needs wisdom unto its perfection. Adventist Today has a reporter in Kenya to bring our readers all the news in this developing political scenario in a country with a large Adventist membership and major institutions, as well as a number of Adventists who hold elected office.

The featured photo is of Kenya’s Supreme Court Chief Justice David Maraga, who is a member of the Adventist Church. If you have questions or information for the Adventist Today reporter in Kenya, please send them by Email to atoday@atoday.org and put in the subject line: For Reporter in Kenya.