A Dutch Adventist congregation has written a letter to the denomination’s Executive Committee of the Netherlands Union of Churches Conference, demanding clarification on the “implementation of the equal treatment of female pastors” in the country.

In the December 6 letter, the Uniek congregation (based in the city of Utrecht) demanded the union act on a motion adopted at the “2012 Netherlands Union Constituency meetings to implement the equal treatment of female pastors in the NUChC through ordination on equal footing with male pastors.”

The letter goes on to note that although the Executive Committee decided to proceed with the ordination of female pastors in 2013, the same body decided to put female ordination “on hold” in 2017 until 2019.

As the end of 2019 is approaching, the Uniek Church is urging the union’s Executive Commitee to clarify how it plans to proceed on the issue of women’s ordination by January 2020. Uniek is asking for a description of next steps that the union plans to take on the 2012 motion adopted by the Netherlands Union Constituency delegates.

Uniek is a vibrant church plant congregation with a significant student population.

An image of the complete letter is included below: 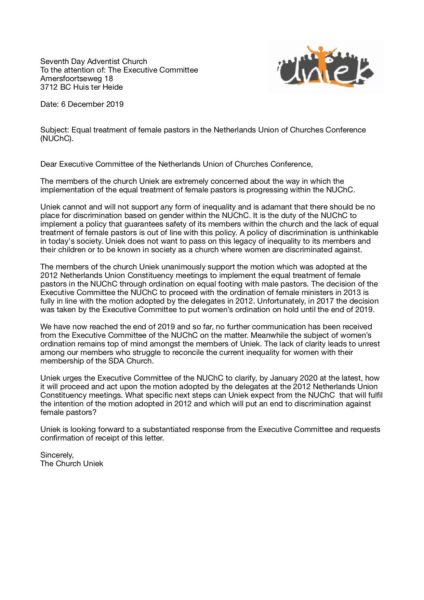 If you are on this site, chances are you value independent news, commentary and conversation in the Adventist community. Adventist Today is here to provide you with just that. We’ve grown a lot this year by expanding our publishing, covering live events such as Annual Council and putting on a world-class event of our own, the AT1 Gathering that you may well have attended in Portland a couple months ago. In addition, we are doing interesting things such as building an international network of Adventist Today student representatives on Adventist university campuses around the world. To do all this, we really need your help and financial support. Help us finish the year strong with a record-setting Winter Fundraiser.

You can also text us at 41444 and use the keywords:
month–to donate monthly
1donate–to donate once

Thanks for the Autumn Adventist Today Magazine! Does Church Membership Matter Anymore?