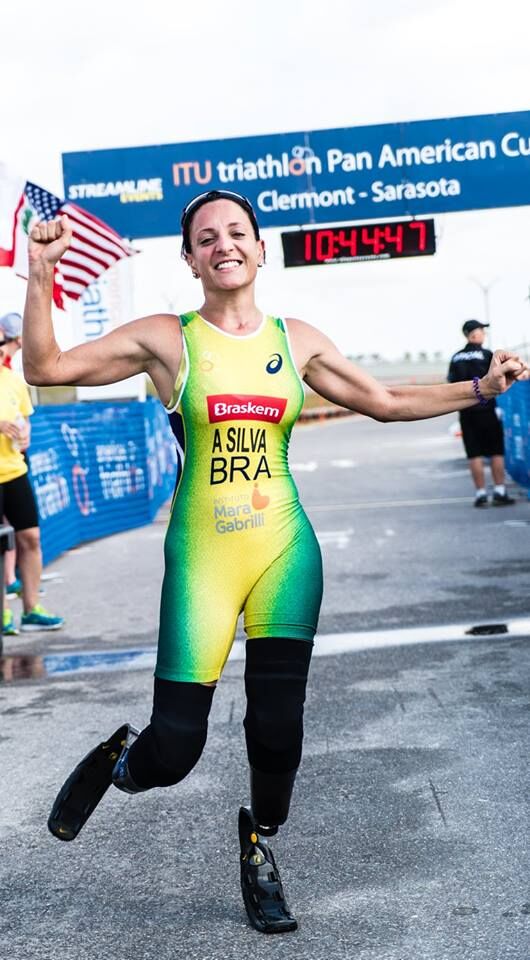 From ADRA – 22 October 2018 | Brazilian athlete Adriele Silva, 31, looks forward to crossing the finish line at mile 26.2 of the 2018 TCS New York City Marathon on Sunday, November 4. The New York Road Runners, organizers of the race since 1970, believe she will be the first female double amputee to complete the New York City Full Marathon.

Silva will run as an outdoor ambassador for ADRA Connections, a volunteer program managed by the Adventist Development and Relief Agency (ADRA), and she will also be supported by American outdoor and sporting goods company, The North Face.

“I hope to inspire people when they see me run and challenge them to go after things that seem unachievable,” says Silva who will be running her first full marathon. “Where I come from, people often look down on you for having a disability, but I don’t think about that. When I face a challenge, I look for ways to overcome it. I see the possibilities and that keeps me going.”

“We are extremely proud to support Adriele in this race, because she embodies ADRA’s commitment to empowering individuals around the world to have a better life and providing new opportunities for underserved communities so they can thrive,” says Adam Wamack, ADRA Connections manager. “Through Team ADRA Connections we want to encourage other athletes and sports enthusiasts to use sports to do good and invite others to be generous so that many vulnerable families can have better access to schools, improved housing, clean water, and other critical necessities.”

Silva’s road to the New York City Full Marathon began in 2012 when she went to a local hospital in her hometown of Jundiai, outside of São Paulo, Brazil, after feeling severe pain. Having received pain medications, she was sent home. Overnight her situation worsened. She returned to the hospital the next day to find out that her problem was serious—a kidney stone had clogged her urinary tract and caused an infection. Within hours, Silva was in an induced coma. For 20 days she remained comatose, her body fighting a losing battle against the bacteria. During that time, the infection led to a lack of blood circulation in her legs. To save her life, doctors had only one choice: to amputate her legs. They brought her out of the coma to get her consent to proceed with the amputation. Weeks later, when she was finally cleared of the infection after 64 days, the now bilateral amputee left the hospital to go learn to live again.

“Before the amputation, I had no desire to run,” she says. “After it happened, I started getting more interested. I wanted to become normal again.”

Since then Silva has taken up running, cycling, swimming and other sports. She has participated in 20 running races in Brazil and in China where she recently completed the Great Wall Half Marathon in 2018. In 2017, she was the first female bilateral amputee to run the Iron Man in Brazil. In addition, she remains the only bilateral amputee in Brazil to run the 100-yard dash, a record she set—and still holds—while wearing walking prosthetics. She is also making plans to learn to snowboard in order to compete one day in a Paralympics event. Silva trains every day, weight trains, and continues physical therapy to hone her running ability in the prosthetics.

“It’s an honor to be part of such a great competition in New York, and to run with so many other good runners who have come to compete from many parts of the world,” says Silva. “Though I haven’t won a race yet, I feel great knowing that I have the potential to run the distance, and that already makes me a champion.”

While in the U.S., Silva will race on behalf of ADRA Connections in the 25th Annual Aspen Medical Products San Diego Triathlon Challenge (SDTC), to be held Sunday, October 21 in La Jolla, California, participating in the 1-mile swim event followed by a 10-mile run. In November, she will also run The North Face Endurance Challenge, in San Francisco, California before returning to Brazil. She will have several speaking engagements at various universities and faith-based communities in order to raise awareness about disabilities and encourage people to become active in sports and service.

ADRA Connections is a global volunteer program that allows service-minded individuals to experience first-hand the mission of ADRA through short-team opportunities and make a difference in the communities they serve. In 2018, ADRA Connections organized the largest U.S. collegiate volunteer trip, bringing over 200 students from seven universities in the U.S. and Brazil to the heart of the Amazon.

To join Team ADRA Connections go to www.adraconnectiong.org/team and learn how you can use sports to do good.

Established in 1956, ADRA is a global humanitarian organization that provides disaster relief and assistance for sustainable development to vulnerable communities in more than 130 countries. For more than 60 years, ADRA has been committed to working with communities around the world to improve their quality of life and create positive change for those living in poverty and anguish. For more information, visit www.adra.org