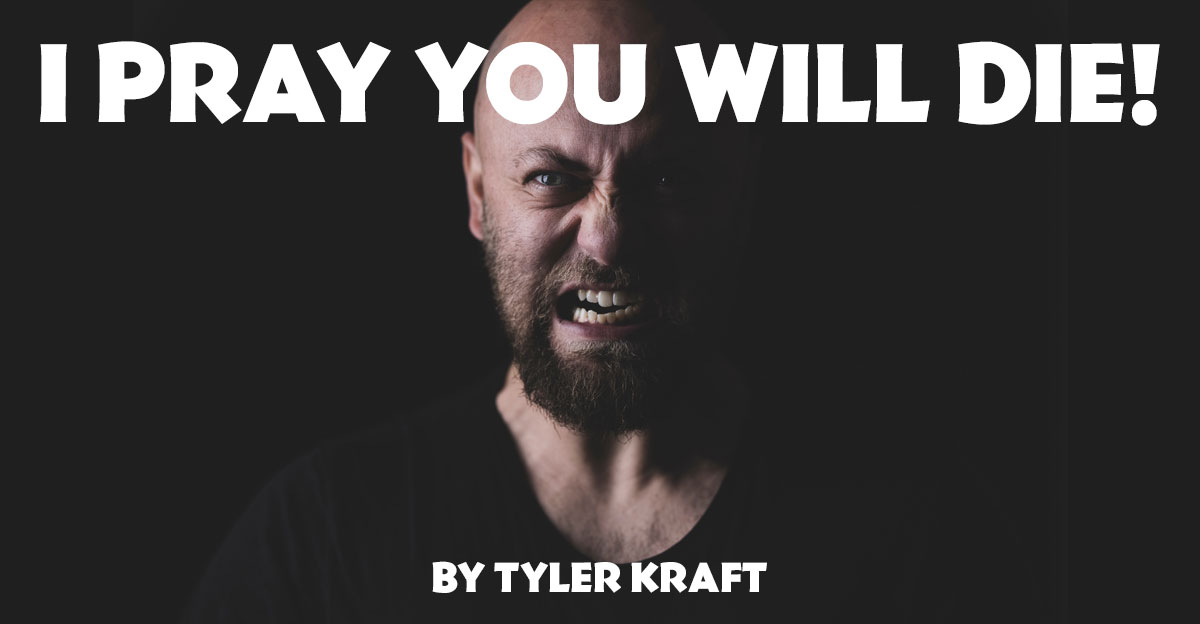 Can I let you in on a secret? Pastors get angry at times.

Well, maybe not all pastors. Perhaps there are some who are thoroughly spiritually enlightened. But I confess that I get angry on occasion. So do some of my pastor friends.

That’s probably not too surprising. After all, pastors are human, and anger is a human emotion. But would it be surprising to learn of pastors who get so angry they actually wished for people to die?

I have never heard or witnessed any of my colleagues expressing such a desire, nor have I ever come to the point of wishing death upon someone else myself. We pastors might daydream about that headache-inducing member transferring to another church, but that’s about as far as it goes. At least, usually.

Yet, there are indeed pastors that come to the point of expressing the wish that others die. Especially, it seems, certain political leaders.

During President Obama’s administration a Baptist minister in Southern California made headlines for praying for the president’s death. Later a pastor in Texas made the news for claiming that his prayers led to the death of Supreme Court Justice Ruth Bader Ginsburg.

No doubt these men felt that their anger was righteous and their causes were just. But many Christians and non-Christians were surprised to hear that pastors would desire and pray for such things to happen.

It turns out it is, from a certain perspective.

At first glance, a yearning to see someone die might seem contradictory to the teachings of the Bible. But we actually find such sentiments scattered throughout Scripture.

Proverbs 11:10, for example, talks about the joy that results from the death of the wicked. The book of Psalms is filled with stanzas about the desire to see one’s enemies annihilated. Such passages are referred to as imprecatory psalms. One of the most well known is Psalm 137, verse 9, which expresses the delight that will come from smashing the Babylonians’ babies on rocks.

Over the past decade or so, one of the major imprecatory psalms has become a weaponized meme aimed at politicians from President Obama to President Trump to Speaker Pelosi. Psalm 109:8 is sometimes referenced jokingly, as it refers to someone’s days being few and being replaced in their position of leadership. But the context suggests the psalmist isn’t referring to a person being voted out of office, but the position being filled subsequent to his death. “Let his days be few; and let another take his office” is followed in verse 9 by “Let his children be fatherless, and his wife a widow.”

This mindset isn’t only confined to the Old Testament, either. Toward the end of Jesus’ life and ministry, James and John asked Him if they could call down fire to destroy a Samaritan town that had refused to welcome them (Luke 9:54). That His disciples, who had spent three and a half years with Jesus, still had such an inclination for the destruction of others shows how ingrained in human nature these desires are.

The thrill of vengeance

I think if we are honest with ourselves, we can relate at some level to these expressions of vengeance. We want people who oppose us to pay for the bad things they have done to us.

When we watch a movie, we root for the good guy to win and the bad guy to lose. A story where the villain spends the majority of the time hurting, terrorizing, and killing people must have a resolution. The villain needs to be dealt with by the hero at the end—and the more permanent the results, the better. If, instead of an epic showdown, they just shook hands and walked away, we would be deeply unsatisfied. We want wrongdoers to get their just desserts.

When it was revealed near the end of President Trump’s days in office that he had contracted COVID-19, my social media feeds were filled with posts about praying for the president. Many of my pastor colleagues posted reminders that regardless of one’s political views, we should uplift our leaders in prayer and not wish for their demise.

Yet, as with most things on the internet, the drama was found in the comments. There was at least one comment per thread from someone taking pleasure in Trump’s illness, noting the time and effort he’d spent denying, dismissing, and downplaying COVID-19. There were even a handful of Christians who explicitly said they refused to pray for him, because he was experiencing the consequences of his own actions or inactions.

This type of response was reflective of a larger general reaction from people in America, if not the world. The dictionary publisher Merriam-Webster claimed that searches for the definition of “schadenfreude” (meaning “enjoyment obtained from the troubles of others”) increased by 30,500% after the president’s diagnosis was made public.

There were some people who did not simply stop at experiencing a bit of schadenfreude at Trump’s bad fortune. They openly wished for his death. Thankfully, I haven’t learned of any pastors who have expressed such a desire, but I know some other Christians who have. Perhaps they figure that what is good for the goose is good for the gander: if some Christians could pray for the death of President Obama, why can’t other Christians pray for the death of President Trump?

We learned as children that two wrongs don’t make a right. But many of us perpetuate this divisive behavior. We get a thrill out of that moment when we get to turn that anti-Obama slogan into an anti-Trump slogan, or when we turn an anti-Trump meme into an anti-Biden meme. So, it is no surprise that some Christians have found themselves wishing for and praying for the death of the other political party’s leader, while feeling righteously justified in their anger.

But, is there anything wrong with that? If King David, whom God called “a man after my own heart,” could write imprecatory psalms, why can’t we pray similar things? If the Sons of Thunder who had spent years in close, personal contact with Christ could still want fire to rain down on their enemies, why can’t we want that to happen as well?

The Divine side of things

While the Bible contains the human element, it contains the Divine element. Just because it accurately describes human emotions and inclinations does not mean that these sentiments have God’s seal of approval.

David did many things that were displeasing to God, and earned a divine reprimand on several occasions. Likewise, Jesus rebuked James and John for their request to destroy the Samaritan town. While Scripture acknowledges the full spectrum of human qualities, it clearly invites us to reflect the noble character of Christ instead of the base attributes of the world.

Peter encourages us to honor our secular leaders (1 Peter 2:7). Paul tells us to pray for them (1 Timothy 2:2). Jesus goes so far as to call for us to love our enemies and pray for people who persecute us (Matthew 5:44).

Living up to these high ideals is undoubtedly easier said than done. But what undergirds these virtuous principles is our faith that God is at work to bring about His everlasting kingdom regardless of who sits in the earthly seats of power. God’s people have outlasted Nebuchadnezzar, Hitler, Stalin, and Pol Pot. We have survived the Obama administration, and we have survived the Trump administration, and we will survive the Biden administration. It might not be easy, but we will endure until our King returns.

There are times when we all fall short of Christ’s perfect character while we wait for His return. We get angry, we say mean things, we post harsh memes on social media, we might even pray vengeful prayers. The good news is that God offers us grace for the times when we fail to reflect His ideal qualities.

Election seasons in particular are tests of character, for candidates but especially for us voters. Every evening news broadcast shows us how much we are in need of God’s grace.

May a spirit of grace point all of us toward a more Christlike future.

Tyler Kraft is the pastor of the Hayward Adventist Church in California. He is a graduate of Pacific Union College and the SDA Seminary, and is currently working on a D.Min. degree from Andrews University. He’s married to Crystal, with whom he enjoys trying new foods, and following Jesus.