Timothy R. Jennings MD is a prominent Chattanooga psychiatrist who graduated from University of Tennessee Health Science Center College of Medicine in 1990 and did a psychiatry residency at the Dwight D. Eisenhower Army Medical Center in Atlanta. He has been especially noted for treating depression with powerful magnetic waves applied to the brain and has advertised “Go Drug Free for Depression” as an “alternative” for those who have not been helped by antidepressants or have had intolerable side effects. Although “drug free,” Transcranial Magnetic Stimulation (TMS) is not “free,” as it requires expensive patented machines and multiple treatments.

According to the National Center for Health Research TMS requires treatment five days a week for four to six weeks, and costs $300/treatment. Readers interested in this topic are referred to a lengthy review of TMS effectiveness they conducted.

However, Dr. Tim Jennings is of interest to Adventists far beyond his psychiatric practice. His Sabbath-school class has long attracted attention beyond Chattanooga. Dr. Jennings has written several books, tracts, and even published his own paraphrase of the New Testament called The Remedy! I have several good friends who are very enthusiastic about his spiritual ministry and have shared several of his self-published books with me.

That is why his political views now infusing health issues are so distressing. In the past he has come out in support of the twice-impeached past American president’s policies both on his Christian website and in an article published on the Spectrum website February 3, 2020.

Now Jennings focuses on masks, vaccines, and what he considers the threat of “mandates.” He calls the most-studied vaccines in the long history of vaccination “experimental injections,” as if this were some sort of isolated lab study instead of a crisis response to a death-dealing pandemic.

He repeats discredited claims that “vaccine deaths are not being studied.” And now, because his anti-vaccination/anti-masking opinions, fears, and conspiracies are actively opposed by most reputable scientific institutions and organizations (AMA, AAFP, AAP, JAMA, NEJM, NIH, WHO and the majority of family physicians, pediatricians, internists, and public health specialists), he claims that the majority of gullible physicians (himself excepted) have been hoodwinked—“they have forgotten how to think, how to do real science, how to examine the evidence…”

So what do the advanced reasoning skills of Dr. Jennings lead us to? Well, here is a sample from his ramble down his “Come And Reason” road. I’ll suggest references contradicting what he is accusing the medical profession of—that they “get pulled away from evidence-based medicine and into propaganda-driven, opinion-oriented approaches?” Exactly the problem as I see it.

1.) He quotes someone suggesting that well-vaccinated Israel is showing the futility of the RNA vaccines, because “positive tests and serious hospitalizations in Israel have risen 20-fold since early July…” Of course, they have risen “20-fold since early July” after the introduction of the Delta variant to Israel, because in Israel transmission had almost fallen to zero due to widespread vaccination. His source again makes this misleading statement: “In both Israel and Britain, most deaths are in fully vaccinated people.”

The current Haaretz Israeli newspaper publishes this chart showing the huge benefit fully vaccinated people (ever over age 60) have against those unvaccinated in the face of COVID-19’s new variants: 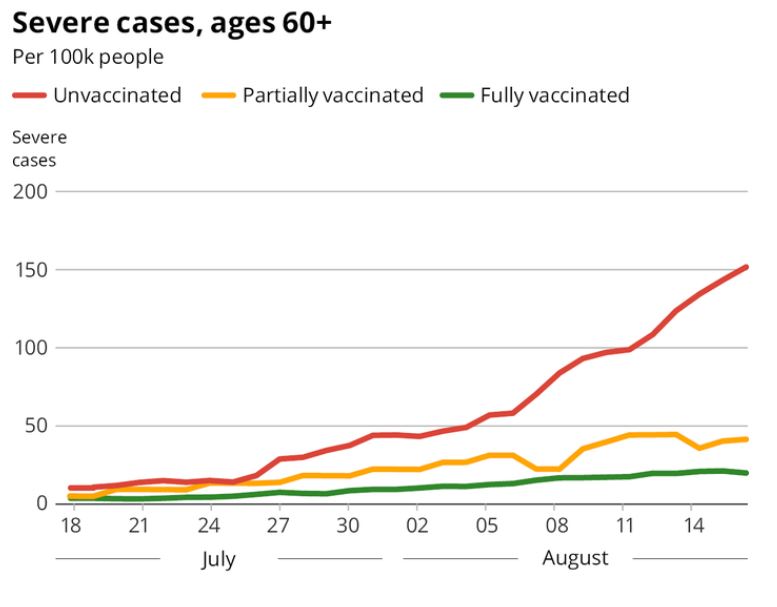 The bottom green line is “severe cases” of the new COVID-19 in fully vaccinated people. The next yellow line is the same in partly vaccinated people. The red line is severe cases in those who are following Dr. Jennings’ advice and trying to get “natural immunity” by getting sick from COVID-19 without being vaccinated. Why would anyone suggest that Israel’s experience is reason to doubt the efficacy of the present vaccinations in preventing severe illness from COVID-19?

2.) He then lists a stack of fully or mostly discredited therapies and placebos as a solution to illness from COVID-19.

Only the last three on the list are not dangerous with possible serious side effects, and all have proven to be largely ineffective in preventing death or long-term disability from COVID-19. All have had their proponents, Petri dish or theoretical suggestions, and all have been tested in real life. There are now very few politically unmotivated supporters of any of those drugs. Dr. Jennings denies political motivation, but when you are agreeing mostly with QAnon conspiracists and irrational pillow salesmen, one gets a bit anxious.

3.) Dr. Jennings ends with this anti-vaccine/anti-masking platform on which he challenges us to join him:

Dr. Jennings is wrong and dangerously so. He is not an expert on infectious diseases. He does not deserve to be taken seriously here and should likely best be completely ignored on this topic.

Dr. Jennings has published a response to this article that appears on his blog, https://comeandreason.com/response-to-adventist-today-article/ .  Readers are encouraged to read it.

In this response he spiritualizes his main concerns as being overlooked by me and quotes well-known statements by Ellen G. White about how Satan’s government and God’s government use different principles in religious concerns.  The EGW quotes are about “matters of conscience” and “where principle is involved” and “the consciences of men.”  He writes that his concern is that requiring vaccination is some sort of slippery slope and he writes a sentence where he seems to equate to “fine people, restrict their travel” with “imprison, or burn people at the stake…”  Dr. Jennings affirms that he was promoting spiritual freedom and that “getting the vaccine is irrelevant to the real issue.”

Why I Wrote This Article

Since I fully agree with Dr. Jennings and Sister White in favor of freedom of conscience and against religious coercion–especially “burning at the stake” — I went back to his original August 19, 2021 blog “COVID AND THE DEATH OF THE INDEPENDENT AMERICAN PHYSICIAN” to see why I went astray?

Here is what I reread:

On the other hand, “Science” is mentioned 19 times.  “Evidence” is mentioned 23 times.  The “Government” is mentioned 6 times (always critically).  I did find one reference to “Biden” and two to “Fauci.” I found two mentions of masks, both critical with one asking for “Prohibition of all mask mandates for school-aged children.”

I found 32 mentions of the COVID vaccine.  In most cases the mention was in a negative context such as: “may have caused harm,” “experimental…have harmed their patients,” “immediate halt to all COVID vaccines mandates,” “autopsies of [those]reported to have died of…vaccines,”  “ineffective,”  and that the safety of COVID-19 vaccines is an “unproven belief.”

“Expert opinion,” “medical experts,” or “so-called experts” are criticized 13 times.   And the “expert opinion, agency recommendations, consensus guidelines, association protocols” that disagree with his own select minority-opinion-promoters led to a “grave concerns…[that]doctors are becoming less capable… [and are] colluding with actions that harm their patients…”

In place of experts, he then quoted as authority, Alex Berenson, who the Atlantic Monthly profiled as “The Pandemic’s Wrongest Man” saying, “In this crowded field of wrongness, one voice stands out. The voice of Alex Berenson: the former New York Times reporter, Yale-educated novelist, avid tweeter, online essayist, and all-around pandemic gadfly. Berenson has been serving up COVID-19 hot takes for the past year, blithely predicting that the United States would not reach 500,000 deaths (we’ve surpassed 650,000) and arguing that cloth and surgical masks can’t protect against the coronavirus (yes, they can).”

The Atlantic article then goes on point by point to show how each anti-vaccination case Berenson makes (including those Dr. Jennings repeats), are wrong, relying on “half-truths, untruths, and obfuscations.”

Dr. Jennings then quotes an Idaho physician against COVID vaccination, Dr. Ryan Cole, MD.  Dr. Cole’s statements have been carefully examined and refuted.   Cole has described the vaccine as “fake,” a “clot shot” and “needle rape.” He’s also promoted a debunked claim that thousands have died after getting vaccinated.

Yes, I Was Responding to Science and Public Health Issues

So, yes.  I did miss it, if Dr. Jennings “main point” was “freedom of spiritual conscience” as almost all of his 4,299 word blog was about mask and vaccine safety and efficacy, about science and evidence, and about which authorities were to be trusted, your doctor and her organizations or the anti-vaxers.

Dr. Jennings spiritual ministry has clearly been helpful to many.   I am only commenting on his vaccination and masking hesitancy.  The patients of mine who asked me about Dr. Jennings’ blog were concerned because it made them afraid of being vaccinated and concerned about the safety of masking children. I hope this discussion helps them understand that God does indeed promote freedom of conscience and freedom from coercion in spiritual matters, and that being vaccinated against COVID19 or wearing masks in public during  pandemic is entirely a question of health and public safety and should not be linked in any way with the Great Controversy, religious freedom, mark of the beast, or Jesus Christ and his dear Seventh-day Adventist followers.