Come Fire and High Water: Adventist Camp in British Columbia Provides Help to Those in Need 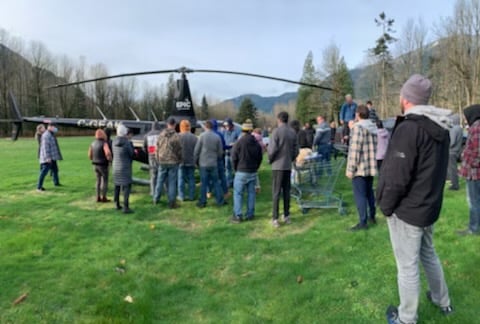 30 November 2021 | A powerful storm system from Nov. 13-15, 2021, caused calamitous flooding and fatal mudslides in British Columbia, the most western part of Canada. A second storm this past weekend brought with it more evacuations and road closures. Today, a third storm is expected to hit the region once again, with officials predicting it could be the worst one this month, according to a CBC article.

But hope lives here. Or, at least, it camps.

Camp Hope in British Columbia is owned by the Seventh-day Adventist church, and has only been an Evacuation Emergency Social Services Center in partnership with the Lytton First Nation since July 8, 2021, according to a Nov. 15, 2021, post on its Facebook page.

Today (Nov 30, 2021) is Giving Tuesday, THE day to back your favorite nonprofits online. Thank you for supporting the accessible, independent journalism of Adventist Today with a generous gift!

Those emergency services were put to the test as the first of the powerful storms caused mudslides that shut down the highway in front of the camp.

“We woke up Monday morning and we realized the highway out in front of the camp was just bumper-to-bumper, and people had been there all night,” said Bill Gerber, director of Camp Hope, in an interview with CTV news.

So the camp sent out people to invite the stranded motorists in. Then, they sent out their summer camp bus to help ferry them across high water.

Although public power was unavailable in the area, the camp has its own emergency generator, which was enough for its 72-room lodge although not for its cabins. So they took the mattresses out of the cabins and put them into the auditorium. And into the hallways. And into the dining room.

“Anywhere we could fit them,” said Gerber.

The lodge was already housing people evacuated from wildfires which destroyed 90 percent of the nearby village of Lytton on June 30, 2021. About 250 people lived in Lytton, and more than 1,000 live on Indigenous reserves spread along the Fraser River, outside the municipal boundaries of the village, according to a CNN article.

Currently, the camp is housing 20 Lytton First Nation members who don’t have homes to go home to, or are so isolated that needed services are too far away if an emergency arises, said a camp spokesperson.

Gerber turned attention to the First Nations when the CTV News interviewer asked him what was needed. Gerber mentioned the Chawathil First Nation and the Skawahlook First Nation, who did not have access to as much food as the camp did.

“I think food is going to be the first need between us and our neighbors,” said Gerber.

But though the stranded motorists may be gone, the camp is not forgotten.

Samantha Brownlee, who was among those who found shelter at the lodge with her two sons during the storm, started a fundraiser to buy playground equipment for the camp. The goal is to raise $15,000, and as of Nov. 26, 2021, half of the amount has been raised.

However, a newer, better-functioning 200 KW generator is also needed. Any money in excess of the $15,000 target will go toward purchasing a new one.