Christmas Blessings for “The Strangers within Our Gates”

Like many pastors of multi-church districts, Pastor Lori Farr sometimes felt she spent more time in her car than actually working with her parishioners. She enjoyed it, and loved her people, but now that she was full-time caregiver to her parents, something had to give. Her father has Alzheimers Disease, and her mother has multiple health issues. Farr had begun to pray for a move that would make it possible for her to give her best care to her congregants and to her parents.

Two years ago she was in her car yet again, with tears pouring down her cheeks, she recalls. “I was getting overwhelmed. I was praying, saying, ‘God, you have to make a change, or I can’t continue.’”

And her cell phone rang. It was Ohio Conference President Ron Halvorsen. “We have a church we want you to interview for.”

Farr was in shock. “I served on the personnel committee, and I didn’t even know there was a church available! It’s just amazing how God works!”

Another pastor, a young man with a family, was interviewing for the same job. The two knew each other—“he was very qualified,” Farr says. Apparently God had a different plan for that pastor, since the committee voted unanimously for Farr.

“It was totally a God thing,” she says. “The Lord opened doors for me to be in a medical community where my parents can get the care they need. I have my office at home and can work from home. Even when I’m gone, it’s in short bursts. I have a visit or a committee meeting, but I’m right back, and I’m not spending an hour and fifteen minutes on the road to get here. God heard my prayer and he totally took care of my need.”

The church was Miamisburg, which is on the campus of Sycamore Medical Center, a part of the Kettering network. Farr says she “feels so loved here; it’s one of the most loving churches I’ve ever been in. The people really care for each other.”

That love is showing especially brightly this Christmas. For many years, the church has had a “Giving Tree.” In the fall the pastor begins seeking names of families who have needs, and by the Sabbath of Thanksgiving weekend, a tree is set up covered with number-coded tags with Christmas wishes, which congregants take home and buy for. Last year the church sponsored five families. Each member of the family gets to list two things they need and one thing they want.

“They get three presents because that’s what Jesus got,” Farr adds with a chuckle.

This year she challenged the church to sponsor more families. A few came in from the church, then a couple of families outside the church heard about it and called her. It occurred to her that this year, especially, there are so many refugees in crisis. She knew a woman, Tabitha Uwimpuhwe, once a refugee from genocide herself, who works with local refugee families, so she called and said the Miamisburg church would like to help.

“I have 450 people,” said Uwimpuhwe. [Watch for a full feature on this ministry!]

“Um…how about ten families?” asked Farr. It turned out the families had so many members that they had to reduce that number to six families. This raised the total of families the church was adopting to thirteen.

Each person who took a tag was to buy the gifts, wrap them, and put them in the office with the number code on them. But there was so much need that Farr thought they could use more help. She went to Sycamore Medical Center and told them about the project, and they gave her a check to pay for a coat for everyone.

Farr had a talk with her parents. “We have all we need. Let’s take the money we would spend on each other and spend it on these families.”

Another friend wrote a check for $500.

Not one single child from a refugee family asked for toys; they only asked for clothing and other necessities. Another friend said, “They have to have toys for Christmas!” She found out ages and bought a toy for each child.

Yet another friend showed up with such a big bag of toys that they were able to make another bag of toys for each family.

“We ended up with money to spare because so many people got so excited to get involved. Every tag was off the tree and all gifts were purchased,” Farr reports.

Last Sabbath afternoon, December 17, the church had a sorting party. They wrapped all the things that weren’t wrapped (like the pile of coats and shoes), and put all the right names on packages in place of the number codes. On Sunday, they rounded up some interpreters, since many of the refugees (all from African countries) don’t speak much English yet, and they set out to deliver. 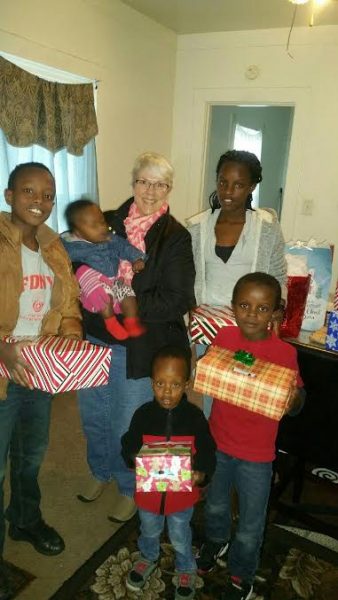 Describing the reactions, Farr becomes almost incoherent. “Oh, my land! Just joy…just joyous! Children hugging you, running up to you, they don’t even know you, but they run up and hug you. They kept saying, ‘These are for me? These are for me? It’s like they were stunned. They couldn’t believe it. One father kept saying, ‘God bless you, God bless you.’ It might have been the only English phrase he knew.” 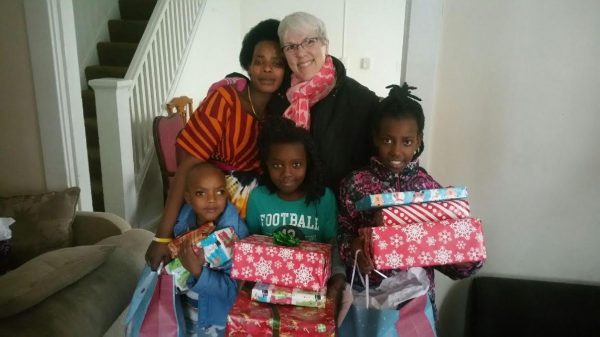 Farr with some recipients–photo sent by L Farr

On Wednesday, Farr told me, “I was talking with one of my elders, and she said, ‘You know, we need to do more than just help them at Christmas. We need to actually adopt these families.”

Farr agrees. She says at their next elders meeting in January they will talk about how to encourage church families to step up and adopt families long-term. They need to learn the language, become acculturated, and find jobs. Depending on where people have come from, perhaps tents in refugee camps, even the running of an American home and its appliances might be a learning curve. These are some of the things the current refugee ministry is already doing, but they can use all the help they can get.

“They don’t have anybody here,” Farr points out. “Some have left their whole families. I had a conversation with a boy about 17 or 18 in my car that day. He’d left his entire family and come to stay with an uncle, because if he’d stayed in his country he would have been made to fight and he didn’t want to. These people are hard-working. They want to become productive Americans. Some people say refugees just want to mooch off the welfare system, but they’re doing the best they can to get on their own feet. Sometimes they’ve been here less than a year and they have jobs and are learning English. They’ll do anything they have to.”

Miamisburg Seventh-day Adventist Church is having a blessed Christmas already. And the love is spreading.