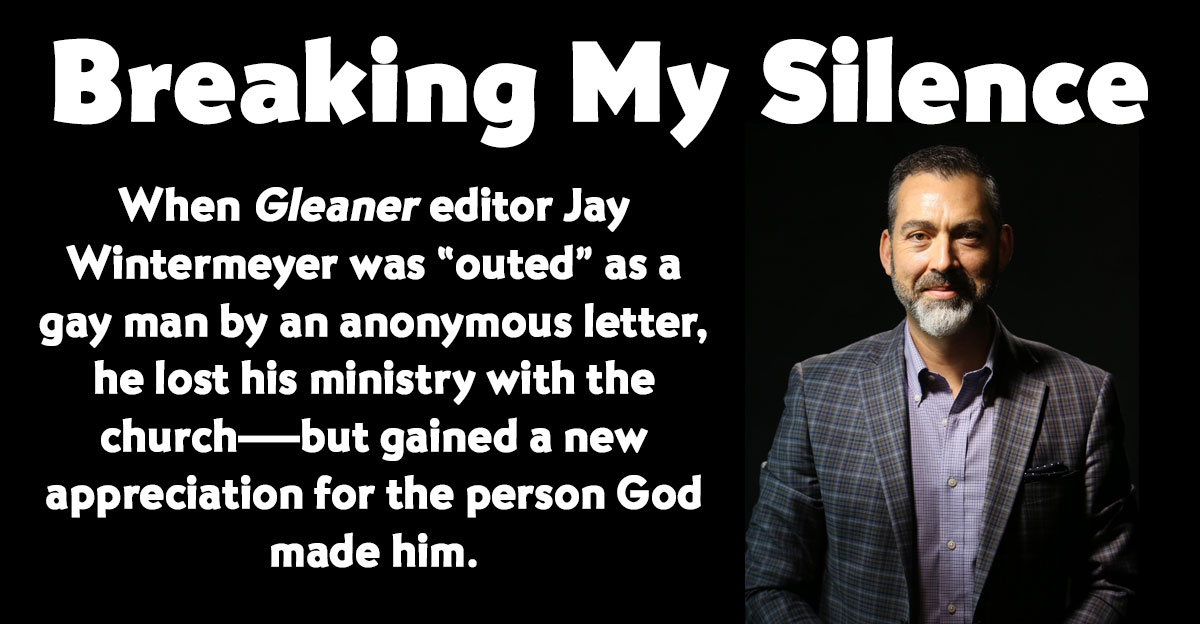 I’ve worked in Adventist radio, mission work, and church administration at the conference and union level for more than 29 years. I’ve enjoyed my work for the Adventist Church and have felt blessed to produce high quality content and programs that encouraged members and pointed people to Jesus.

That all came to a screeching halt in May 2022, when someone sent an anonymous letter that outed me as a gay man, and demanded my termination.

No doubt some dear saint felt they were doing God’s work by cleansing the temple. Whatever their intentions were, the reality for me is more complicated. My ability to continue working anywhere in the Adventist Church ended immediately.

Simply put, the letter cost me my job and my ministry with the church.

It is deeply troubling that committed Christ followers who have sacrificed in order to work for the church are subjected to a Big Brother-style crucifixion at the hands of anonymous gossips. Unfortunately, my story is not an isolated incident within Adventism. One doesn’t have to look far to discover many people in my shoes.

When John Freedman, North Pacific Union Conference president, confronted me with the anonymous letter, he made it clear that my continued employment was too problematic. The union’s constituency session is scheduled for August with an imminent nominating committee meeting on June 27. In spite of his verbal concern, it was clear to me that union leaders wanted me gone and gone quickly, to avoid uncomfortable distractions to the re-election process.

Science has proven a person can’t change the way they were born any more than a leopard can change its spots. And yet the Adventist church says queer persons are sinful and broken. We’re looked at with disgust and mistrust. We’re shamed into silence, or worse, treated as if we don’t exist.

I think Freedman and others hoped I’d leave quietly. Initially, I planned to. How would God be honored by creating a stir?

Then, it hit me. People have kept quiet on this issue for far too long.

I’m not the first LGBTQ+ person to be forced out of the church, and I probably won’t be the last. Sadly, that’s because the Adventist Church fails miserably when it comes to showing God’s love to the queer community.

A 2022 survey by the Trevor Project found that 50 percent of LGBTQ+ teens (ages 13–17) seriously considered attempting suicide in the past year. And 18 percent actually made a suicide attempt. The sense of hopelessness LGBTQ+ teens and others face is something I’m all too familiar with.

I remember being attracted to men as early as three years old. When my mother discovered these “unnatural” desires she sternly lectured me. A high school counselor solidified my belief that I was broken when they told me I couldn’t be a Christian and be gay. God wouldn’t love me. Faced with what I believed was deep moral brokenness, I tried everything to change.

In college, I convinced myself I could pray hard and get married to a woman. I met a lovely girl, and we talked seriously about marriage. I told her about my struggles. She said everybody struggles with something and that she loved me unconditionally, regardless of my particular battle.

We believed the lie that I could change, and we got engaged and eventually married. For 28 years we stayed together as I wrestled with the belief that God did not love me. I felt I was a wretched sinner and had to gain the victory over my gayness.

The church narrative on sexuality kept me deeply closeted throughout our marriage. I went to counseling. I was rebaptized. I even confessed my “sin” to the church elders and asked them to anoint me. All these were attempts to “overcome” my homosexuality, as if it were somehow as changeable as a preference for rocky road ice cream.

With each unanswered prayer, each failure to find a cure, I felt farther and farther from God. And still my desires for male emotional and physical connections remained and grew stronger. The darkness was deep, the anguish was real and terrible.

This put an incredible strain on our marriage. I wasn’t able to fully love my wife and connect emotionally. I was born wired for another kind of relationship. No matter how hard I wanted to be a good partner, I always felt unfaithful by the very nature of our unequally yoked relationship.

A few years ago the pain became too great. We agreed we needed to transition to being divorced friends. We were both by this time incredibly lonely and broken, victims of the spiritual abuse the church too often places on queer people and those who love them. While we do not regret the decades we were married, we recognize we would make radically different choices had we known what we know to be true today.

You Are Not Broken!

My story is not unique. I personally know many who are in the closet or who are seeking to find clarity on their own sexuality. To them and others I say: You are not broken! You are wonderfully and beautifully made, and God loves you just the way you are!

We Should Not Be Silent

As I think about how the Adventist church treats the LGBTQ+ community I ask myself: Is this really the best way? Is this who we want to be as a church? Is this how Jesus treated marginalized persons?

I firmly believe it is time to take a stand against the erroneous beliefs and interpretations so many hold about human sexuality. No one should feel that death is the only way out of suffering created by the church. No one should suffer spiritual abuse and mental suffering—especially for how they were formed in the womb.

This journey won’t be accomplished overnight.

In short, we must rise above the voice of the accuser that has kicked so many of us to the curb and love all as Jesus loved.

When that dear saint sent the anonymous letter, they did me a favor. Perhaps they believed, or still believe, they were taking out the trash. That couldn’t be further from the truth.

That act of cowardice pointed a spotlight onto a beautifully formed child of God. Empowered by God’s love, I am able to live authentically in the knowledge that I am free—free to love and be loved just the way God created me to be.

After serving as assistant to the president for communication for the Upper Columbia Conference, Jay Wintermeyer accepted a call in 2019 to be the communication director and Gleaner editor for the North Pacific Union. Jay will now be working with the American Heart Association as the communication and marketing director for Oregon, southwest Washington and Montana. Jay is a graduate of Walla Walla University.