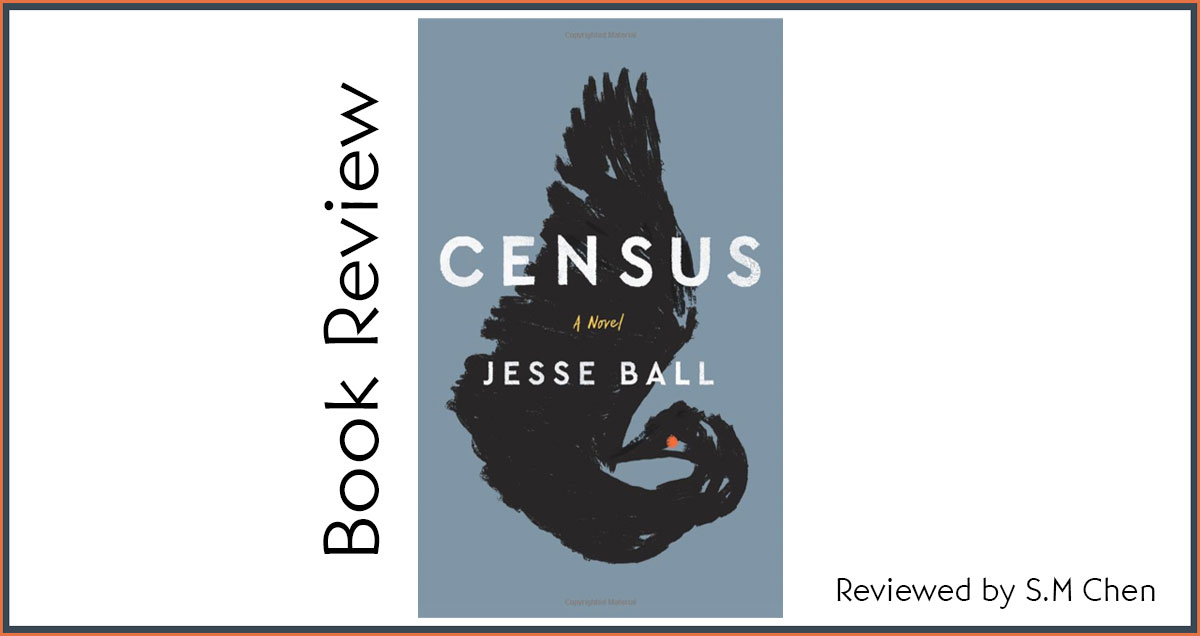 Close to 50,000 books are published each year. There is no way, Evelyn Wood notwithstanding, anyone can keep up with them. Not even a fraction. I am thus grateful for book reviews and reviewers. They help guide and introduce me to authors I might not otherwise encounter.

You may not be acquainted with Jesse Ball. His name, his body of work. Fabulism and absurdism (his self-described genre) may not be particularly appealing.

In 1998 Ball laid to rest his brother, Abram, age 24, who had Down syndrome. The novel Census is, in a sense, a paean to Abram.

How does one accomplish that? If you’re a writer with the sensibility and talent of Ball, you write a novel.

Paul Cézanne, French Impressionist, opined that the only way to truly assess a painting is to prop it up next to a real tree or flower. “If it clashes,” he said, “it is not art.”

An ambition for art—for form to follow function, to aspire to the dignity of nature—marks Census. While there is tragedy, there is also triumph. There is redemption in the storytelling. Ball says, “I try to make books full of tools that will help with the trauma of life.”

The unnamed narrator of Census, a retired surgeon and widower, learns of his impending death. He decides to take a road trip with his son, who has Down syndrome. To give the trip purpose he takes on the job of government census taker. Part of his job entails inking a tattoo with count and year on skin overlying rib of each person he queries.

Road trips offer the opportunity for eating at cafes, talking with people, viewing the countryside and hearing the nuance of accent. As John Steinbeck wrote in another road book, Travels with Charley: In Search of America (1962): “A trip, a safari, an exploration, is an entity, different from all other journeys. It has personality, temperament, individuality, uniqueness. A journey is a person in itself; no two are alike.”

Some other road books come to mind.

Jack Kerouac’s On the Road (1957), the work for which he is best known and which he purportedly wrote on a single continuous roll of paper.

William Least Heat Moon’s Blue Highways (1982), originally serialized in The Atlantic, and graced with some original photos reminiscent of those of Walker Evans in James Agee’s Let Us Now Praise Famous Men.

Robert Pirsig’s Zen and the Art of Motorcycle Maintenance (1974), in which the author’s alter ego expounds on the finer points of maintaining a motorcycle while he motors across America—with his son.

And, of course, Cormac McCarthy’s The Road (2006), that dystopian imagining of a post-apocalyptic future, made into an equally bleak film also featuring father and son.

In a vehicle once used as paddy wagon, the narrator of Census, father of the boy with Down syndrome, sets out to make 26 stops, each town’s name beginning with a different letter of the alphabet. (In a different genre, this device also used by Sue Grafton in a detective series).

The questions that propel the father: What kind of world will he be leaving his son (who will surely outlive him)? Who will be his protector? What leads people to kindness or cruelty?

Although the son is at the center of the story, he is portrayed only through his effect on others. This is by design, for Ball wrote, “the use of any language associated with disability immediately forfeits any possibility for a full portrait.” The boy elicits a variety of responses: camaraderie, hostility, mockery, acceptance, recognition. As one example, the father notes, “They came out of the house, a man and woman together. People come rather quickly towards you, don’t they? And then they stop at a distance they consider safe – but it is never the same distance.”

They encounter a variety of strangers: a puzzle maker, a waitress, an actress, a gambler. Not that different from a sampling of those around us.

Even though the son is developmentally challenged, the father talks with him as if he is not. He says, “I told my son about the loneliness that sometimes afflicts people who are alone. Meanwhile, I explained, some other people are just as alone, but never become lonely. How can that be?” By sharing thoughts with his son, the narrator also is explaining the world to himself. Or so it seems.

The narrator is neither hero nor antihero. He is everyman, but one with a streak of optimism. Perceiving how some of us yearn toward joy even when there is no justification for such, the narrator muses: “Reason and sensical behavior are not always necessary if there exists some small flood of kindness.”

This thought perhaps not too dissimilar to what, in an earlier era, an apostle wrote: “Love covereth a multitude of sins.” (I Peter 4:8).

In one home, they encounter a couple whose daughter had Down syndrome. Says the woman, with empathy: “I can see from the way you are with him that you see – you see what we saw, that they experience the world just as we do, and maybe even, maybe even in a clearer light.”

This woman adds, “I think you cannot know the good you do.”

One reviewer in The New York Times could think of no higher praise for the novel than the above quote.

Another closed with this:
“When Bill Moyers suggested to The Hero’s Journey author Joseph Campbell that people are not on a journey to save the world but to save themselves, Campbell famously responded: ‘But in doing that you save the world. The influence of a vital person vitalizes.’

“Census is an odd, poignant, vitalizing novel well worth the journey.”

Road trips are not restricted to father and son.

In a larger cosmic sense, we are all on a road trip. The road may be long or short, broad or narrow, straight or crooked.

As one church founder saw it, her road was narrow and winding, led upwards, and fell off steeply on both sides.

The father in Census was destined to die. Prematurely. The trip he and his son took in the book was one he hoped his son would remember, would perhaps look back on and think, if not say, “This is something my father and I did together.”

We, too, are destined to die.

That is our fate.

But it need not end badly.

That is our hope.