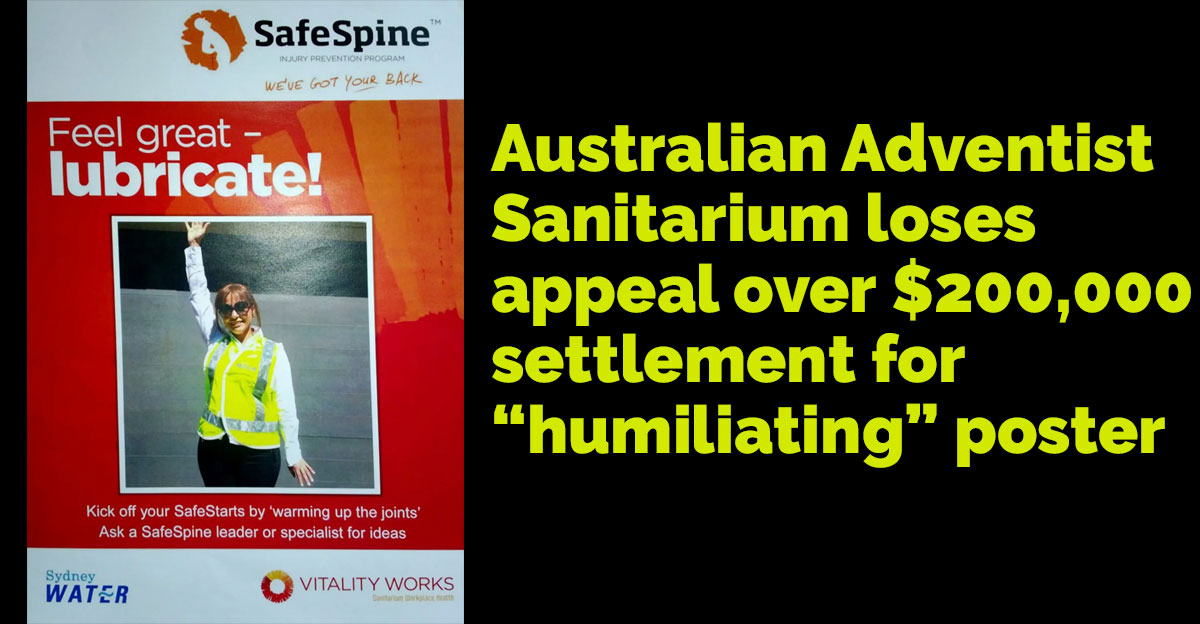 A Sydney Water employee, who’d agreed to pose for a poster about warming up one’s joints before working, won an appeal for a $200,000 settlement from Vitality Works, an Adventist Sanitarium subsidiary company.

The poster read “Feel great—lubricate!” next to her picture, which Reem Yelda felt was “objectively sexual and likely to humiliate her,” according to a story in the Sydney Morning Herald.

“It was plainly unwelcome conduct for Ms. Yelda literally to be made the poster-woman for sexual self-lubrication to her all-male colleagues,” the court said. The New South Wales (NSW) court ruled that it didn’t intend to humiliate her was irrelevant.

“She felt humiliated by the display of the poster,” Justices Lucy McCallum, Andrew Bell and Anthony Payne wrote. Colleagues took the poster to be sexually suggestive, leaving Ms. Yelda in tears. She has not returned to work at Sydney Water since and is separately suing the utility.

Vitality Works had appealed to the Supreme Court, saying that they hadn’t designed the poster to be “overtly sexual” or intended to humiliate Ms. Yelda, and had used the same poster it in other contexts.

“The fact that the poster may also have been capable of conveying a safe spine message (which is not obvious) is not to the point,” the judges wrote. Jokes, horseplay and innuendo could all constitute harassment, they said. What mattered was Ms. Yelda saw the conduct as unwelcome and that objectively, in a male-dominated blue-collar workplace, the image of Ms. Yelda smiling and appearing to point at the word “lubricate” suggested a sexual meaning.