People tell me that Ellen White didn’t plagiarize, because copying from other authors was a commonly accepted practice in Ellen White’s time. Is this true?

When in the 1970s Adventist scholars began to notice that significant amounts of Ellen White’s writings (in some books, nearly the whole book) were copied from other authors, church leaders and the Ellen White Estate went into full defense mode.

The church hired Catholic attorney Vincent L. Ramik to deliver a “verdict” on Ellen White. Ramik, who knew nothing about Ellen White, said that because copyright laws were weak in the 1800’s, and that he had read a bit of Ellen White and found her writing pleasant and interesting, that she did nothing wrong.

This completely missed the major concerns.

First, though the American laws hadn’t kept pace with the European ones, the notion of intellectual property was well-known. As early as 1842 Charles Dickens, whose books were being printed in America without a penny coming his way, said,

those who have a strong interest in the existing system of piracy and plunder … gain a very comfortable living out of the brains of other men while they would find it very difficult to earn bread by the exercise of their own.

But more important, Mr. Ramik’s defense of her plagiarism didn’t answer the deeper question. What bothered Adventists about Ellen White’s copying was that those who believed in her as the Spirit of Prophecy had been convinced that everything she wrote was original, given to her by God. Her extensive copying showed that this was simply untrue.

Ellen White is an important part of our heritage. But those who continue to say that Ellen White didn’t plagiarize because no one cared about copyright laws back then are, to be blunt, deceiving you. Adventists understood perfectly that it was unethical to borrow the words of others without attribution, as shown by this quote from The Review and Herald way back in 1864: 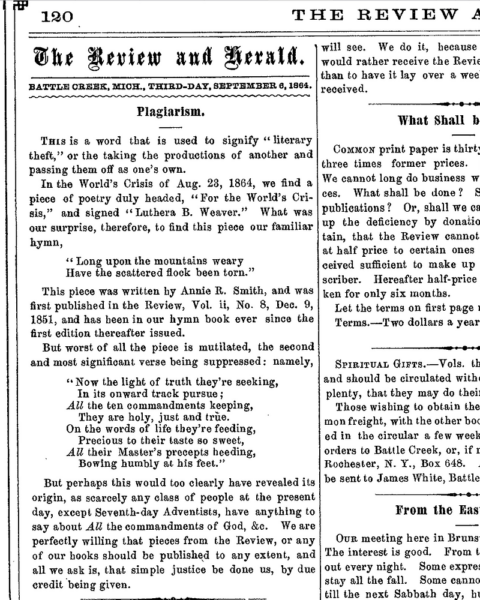 We may be inclined to forgive Ellen White for her copying. But let’s not say she didn’t do it. Church leaders have known about it since she was alive, knew it was wrong, and failed to acknowledge it until it was discovered by others. Aunty wishes they had handled it differently.