ATSS: Is Salvation Inclusive of All the World’s Many Religions? 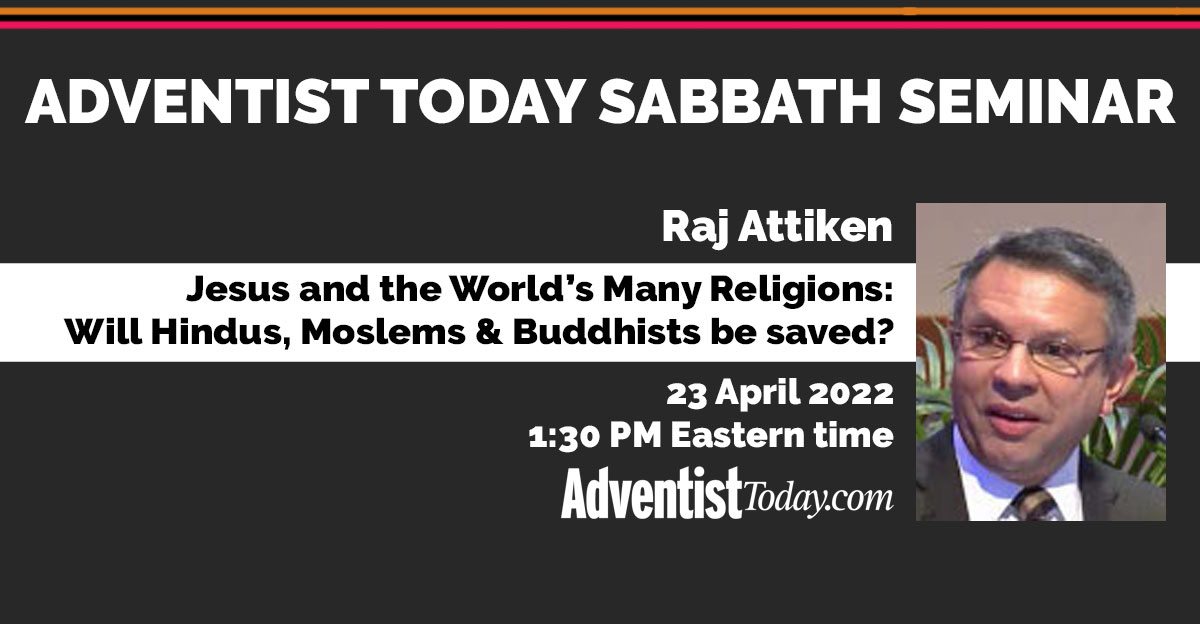 The Christian view of human existence and of the world is largely shaped by the biblical story of a loving God who takes the initiative to put the world back into the good order for which it was designed. According to that story, the love of God which is incarnate in men and women is revealed in the clearest and most decisive way in the person and life of Jesus of Nazareth. The God who loves all people becomes what he loves in the person of Jesus Christ, through whom God’s saving initiative is realized: “There is no other name under heaven given among men by which we must be saved” (Acts 4:12).

Speaking of himself, Jesus said, “Everyone who believes in him will not perish but have eternal life” (John 3:16). Salvation, which has a distinctively Christian content, is made possible only in and through the life, death, and resurrection of Jesus. The declaration that salvation is attained only through faith in Jesus is repeatedly affirmed in the New Testament. This Christian vision of salvation points to a time when creation will be renewed, the dead will be raised, God’s new world will be in place and God will forever be personally present with his creation.

Somewhat in contrast with this view are hints in the Christian scriptures that the salvific significance of Jesus extends to all human beings, even to those who do not know him or confess faith in him. When Simeon first saw the baby Jesus in the temple, he referred to Jesus as the “light to reveal God to the nations.” (Luke 2:32). John begins his gospel by announcing that the Word “brought light to everyone” (John 1:4).

In Romans 5 Paul draws a parallel between Adam and Christ. The first Adam has a universal relevance as the first man and the first sinner. Christ, as the second Adam similarly has salvific significance for all humanity. The will of God to save all people is unlimited and universal. Humans are children of God and always will be, even when they don’t realize it or believe it. Religions, ultimately, are about people.

God, as conceived of in the Christian faith, loves people – all people. The divine plan of salvation for mankind knows no frontiers of people or races. The Holy Spirit is the universal agent who acts in all people, regardless of their religious affiliations. This inclusive view is reflected in what Ellen White wrote in Desire of Ages, page 638: “Among the heathen are those who worship God ignorantly, those to whom the light is never brought by human instrumentality, yet they will not perish.”

If, as Ellen White asserts, the “heathen” are eligible for salvation, they receive eternal life not because their salvation is mediated by the Buddha or by the pantheon of Hindu gods and goddesses, or by Confucius, but because of Jesus. “There is one God and one Mediator who can reconcile God and humanity – the man Christ Jesus. He gave his life to purchase freedom for everyone” (1 Timothy 2:5,6).

Salvation is for People, not Religions

The Christian belief that the transcendent and omnipresent God is universally present implies that God’s presence could be experienced in culturally conditioned images and notions in the nations of the world. This could also imply that the moral and ethical teachings in the religions of the world emerged under the influence of the God of the Bible. Professor N. T. Wright wrote in his 2010 book Simply Christian that the longing for justice, the quest for spirituality, the hunger for relationships, and the delight in beauty are “echoes of a voice,” expressed in different ways, but the voice of God nevertheless.

Perhaps the purpose of Christian missionary activity is not to prevent the damnation of those who have not been converted to Christianity, nor to swell the membership numbers of the Adventist church, but to make known that there is a good God who loves his creation and who will set all things right in his time. In the words of Isaiah, to “do good, seek justice, help the oppressed, defend the cause of orphans, fight for the rights of widows.” (Isaiah 1:17).

The Adventist churches I attended in my youth frequently used a hymn from the Church Hymnal available at the time. “From Greenland’s Icy Mountains,” composed in 1819 by Reginald Heber, a British pastor who went to India as a missionary, portrayed Christians as those “whose souls are lighted with wisdom from on high.” Heber described the people in my home country of Sri Lanka in the hymn’s second verse:

What though the spicy breezes

Blow soft o’er Ceylon’s isle;
Though every prospect pleases,
And only man is vile?
In vain with lavish kindness
The gifts of God are strown;
The heathen in his blindness
Bows down to wood and stone.

I am convinced that God is present in nations and places long before Christianity gets there – even in places where people “bow down to wood and stone.” The gifts that God lavishes are not in vain. People in such places do experience and express love, joy, peace, patience, kindness, goodness and faithfulness (Gal 5:22).

The God of the universe does not belong to Adventists or to Christians. We do not have a monopoly on God. No religion, not even Christianity, can ever encompass the depth of God’s love and goodness. No religion can control or limit the flow of God’s broad, deep, all-inclusive, universal love.

God’s eternal future will be available also to my Buddhist, Hindu, and Muslim friends. It cannot be otherwise.

Raj Attiken is an adjunct professor at Kettering College, and the retired president of the Ohio Conference.