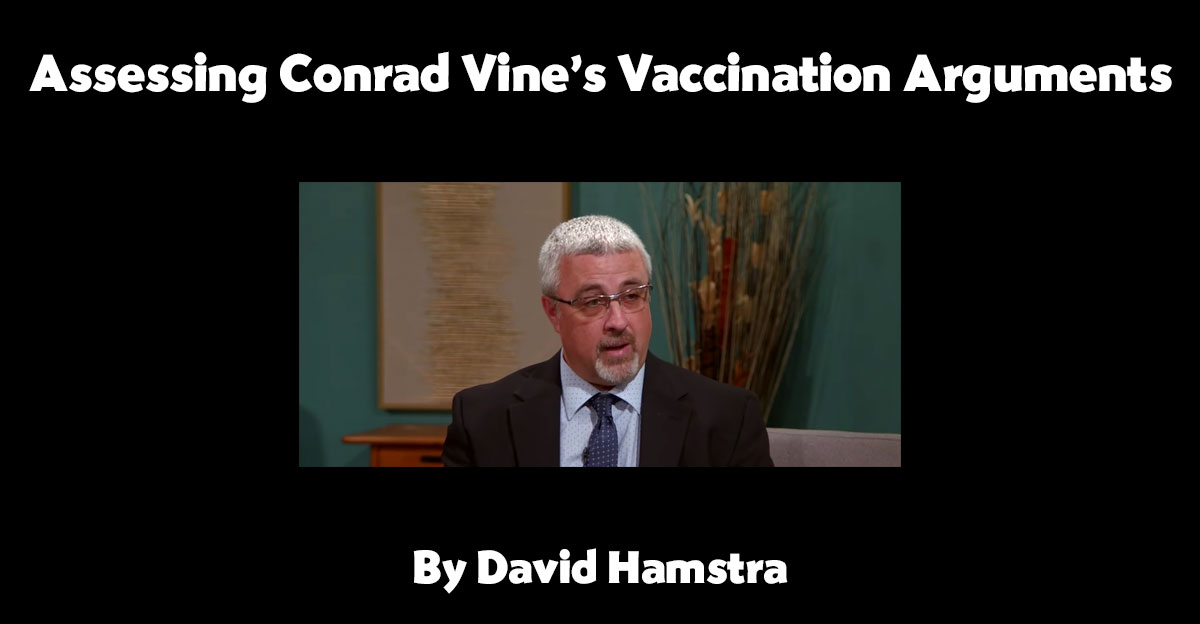 There’s a speech going around Seventh-day Adventist circles right now by Adventist Frontier Missions head Conrad Vine, that alleges that the denomination’s 2015 position statement on immunization should be retracted because it was released by a small circle of church bureaucrats that exceeded the mandate given to them by ordinary church members. In it, Conrad Vine also calls on the Adventist Church to compensate members who have lost their jobs on account of the denomination’s refusal to grant them religious vaccine exemption letters based on the immunization statement.

While I respect the work that Dr. Vine has done with Adventist Frontier Missions and don’t doubt his sincerity, he raised controversial issues and serious allegations without first, doing the necessary research and second, addressing the best arguments against his claims.

Dr. Vine’s procedural argument against the immunization statement went like this (in my formulation):

1. The General Conference (GC) sessions that happen every five years (except during pandemics) have broad lay representation and represent the will of God as best discerned by the Adventist Church in doctrine and policy.

2. The GC Executive Committee (EXCOM)—the smaller body that meets bi-annually in between sessions—has lay representation and can issue position statements if it wants to.

3. The GC Administrative Committee (ADCOM)—a committee of top church administrators—can only do a list of things that GC Working Policy says it can do, and issuing a position statement is not on that list.

4. Therefore, GC ADCOM exceeded its authority by releasing a position statement on immunization in 2015.

I searched an electronic copy of Working Policy, and I can’t find a place where it delimits the scope and sets the terms of reference for ADCOM in the way Dr. Vine described. Unlike EXCOM, whose role is clearly defined in Working Policy, the tasks and functions Dr. Vine presented as a list are scattered through the document. In Working Policy the existence and nature of the ADCOM are assumed, not defined.

According to this webpage, ADCOM was formed by EXCOM to look after matters that EXCOM didn’t have time for after EXCOM got too large to meet every week. In its terms of reference, EXCOM has given ADCOM “Power to act” with respect to a mandate to “consider other routine administrative issues as they arise and give general counsel to World Church entities as requested,” and thus ADCOM does not need to refer such items to EXCOM. (I suspect that the 2015 statement on immunization resulted from a request for counsel.) Dr. Vine is not correct to assume that ADCOM’s scope is limited to only those functions assigned to it in Working Policy, although Working Policy does specify certain matters to be attended to by EXCOM, ADCOM, or both.

I also cannot find a place where the question of who gets to release position statements is addressed in Working Policy. Yes, EXCOM “speaks for the world Church” (Bylaw 13.1.a), but it can be considered to have delegated some of that authority to ADCOM in the miscellaneous domain of “General Administrative Items” so as not to occupy the limited time available at its meetings.

Thus, church policy is vaguer and ADCOM’s scope appears to be broader than Dr. Vine made it out to be. One can argue that this should be clarified and delimited, as statements on issues like vaccination/immunization that seemed of less consequence seven years ago now have great importance for people’s lives and livelihoods. But based on what I have read, I don’t think Dr. Vine has made a sound case that the denominational elites violated the rules set for them by the people in the pews when ADCOM released the 2015 immunization statement.

This adds to my doubts about Dr. Vine’s claim that there is some kind of money-motivated conspiracy behind the immunization statement. (Perhaps it’s time to update the SDA Conspiracy Chart.)

I agree with Conrad Vine that if vaccination is a matter of conscience, it is subject to religious liberty protections. I think that ADCOM erred in claiming it as such, at least not without making some important distinctions.

As far as I can tell, Dr. Vine’s line of reasoning that makes every health choice a matter for claims of conscience makes every potential choice into a matter for a claim of conscience, for which domain of human activity does the Holy Spirit not want to guide? And if every choice deserves protection for conscience’s sake, then no choices can be given protection for conscience’s sake because sinful human beings would become ungovernable.

In my view, Adventists should not claim conscience protections for matters that we cannot ground in revelation and that we change our minds about depending on circumstances and the promptings of the Spirit, so as not to make liberty of conscience unworkable. The majority of Adventists take vaccines or not depending on their prudential judgments about the efficacy and safety of the vaccine in question. Therefore, vaccination is not a religious liberty issue for the majority of our community.

Some Adventists, to be sure, interpret Ellen White’s views on medical interventions to exclude vaccines altogether on spiritual grounds. But many others who are equally committed to her writings take the view that vaccines are a wonderful way to assist the body’s natural healing processes. And we can’t have our health ministries strongly encouraging people to get vaccines, which I and many other Adventists believe they should, and at the same time say you have to give Adventists conscientious exemptions for vaccines because Adventists don’t believe in them. Instead, I believe we should direct such Adventists to seek exemptions by demonstrating the good faith of their conscientious claim in ways that don’t require their religious community to misrepresent its big-tent position on the issue.

Therefore, Dr. Vine’s assertion that Adventists who lose their jobs because their church won’t write them exemption letters should be compensated fails to reckon with the need to be honest about our position as a whole community and to respect the bounds within which religious liberty must operate.

David Hamstra is the Lead Pastor of the Edmonton Central Seventh-day Adventist Church and a ThD Student at Andrews University.