An Adventist Remnant in the Wilderness 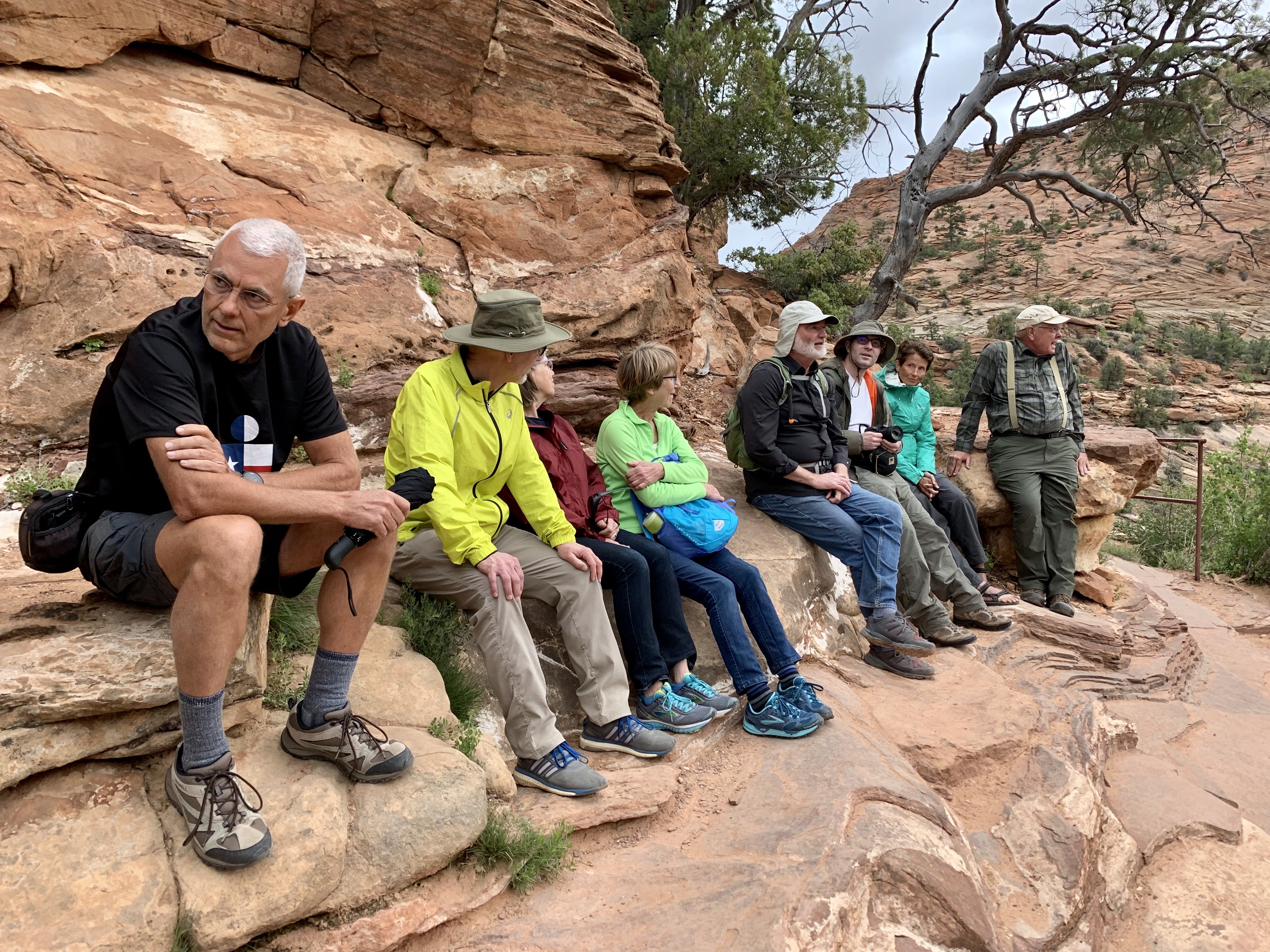 Last month I spent a week wandering in the desert with a small tribe of Adventists on the Talking Rocks geological tour.

Perhaps we were replaying the Festival of Booths or Tents, advised by Jehovah to be annual, after the grown-up children of slaves entered the Land of Promise. One week in transient shelters made of sticks and branches, booths, tents, purposely removing us from the comforts of settled civilization for spiritual purposes.

Our small tribe left carpets, kitchens, beauty-rests, Tempur-Pedics, cell service, and routine to camp on the sand in tents or booth-mobiles. We warmed about open fires. We huddled at night watching tent seams from the inside keep out some of the rain.

Our chief was a shaman looking somewhat like a mature wise Gandalf the Wizard mixed with the shy boyish grin of the elf who saved Christmas. Pastor John McLarty is gray but slender and actively wiry with a penchant for poetry and a love of bare toes as he scrambles over rocks and thorny desert vegetation in sandals. Clearly pastoral and gentle with both lambs and ewes, he shepherded us about the exposed geology of Nevada, Utah, and Arizona. This was his fourth Talking Rocks tour combining his love of the created world and his respect for truth.

At the shaman’s right hand was our tested warrior, Dr. Gerald C. Bryant. Still physically muscled, mentally wide ranging, and even after many years of in-church battles spiritually tender, this PhD in sedimentology reads the pages of scripture written in sandstone, volcanic basalts, thick layers of oceanic and desert sediments thousands of square miles in extent and hundreds to thousands of feet thick as if reading a history book. Every page of the book says this earth was created slowly, complexly, gradually and honestly over deep time, not recently, not magically, but absolutely wonderfully.

Gerry’s specialty is the beautiful red Navajo Sandstone[1] that was formed from a gigantic ancient windblown sand dune once covering up to 850,000 square miles. This is larger than the combined dunes (a sand dune desert is called an erg by geologists) of today’s Sahara![2] These lithified dunes, frozen in place, are clearly records of windblown sands, the powerful winds of God moving many times across the faces of the deep and the faces of the continental uplifts too. Those massive sandstones were not formed under the raging waters of any massive floods, Noah’s or otherwise.

Multiple evidences visible to our eyes, fingers, cameras, the consensus of thousands of honest students and life-long specialists just plain agree. Our small tribe of Adventists got it. The geologists are right, and we have had our young-earth heads in the Biblical equivalence of the proverbial head-in-the-sand ostrich.[3]

Scores of different layers from the bottom of the Grand Canyon lead in layered huge steps to the top of Bryce Canyon 160 road miles away, each laid-down-flat layer a different page of ancient history, some from floods as mighty as Noah’s, some from American deserts bigger than the Sahara, some from volcanoes whose ashes cradle giant petrified logs killed not by flood waters but by volcanic forest fires.

Multiple tracks of animal pathways from creatures no longer seen on earth except as fossils, are found in the sandstone. Billions, trillions, of oceanic creations–microscopic one-celled-shells like plankton, reefs of coral animals, larger mollusk shells– made the many layers of limestone formed by the untold deaths of those created lives. Then in between volcanic layers preserve petrified logs that had to grow to sizes taking hundreds of years between the limestone and sandstone layers.

Not the opinion or theory or idea or interpretation–the solid facts, the undeniable evidence left in sedimentary rocks of four states is absolutely definitive. There is no possible way that God created this earth and its wonders recently and over a short duration.

Yes, of course, God could have. He just didn’t.

It was a few days into the week-long trip when Carrie identified us as a tribe. What made this small group of former strangers into a Remnant Adventist Tribe?

We told each other stories—a grade school classmate of current General Conference (GC) President Ted Wilson telling us that he had announced his goal of growing up to that job in the sixth grade! We discussed who would replace him at the 2020 GC session. Most of us agreed that for a worldwide church it could not be someone who looked like us—older white Americans.

We talked of how Adventist science teachers have to warp the reality of the science to fit the dogmatic fundamentalism they are held to. We recounted how church-supported conferences have become closed to honest discussion. (This paragraph has been edited 6/6/2019 to correct a previous misidentification of the names.)  Our PhD expert on St. George, Utah geology, Dr. Gerry Bryant, was not invited to attend the GC/Ed Zinke sponsored July 2017 “Faith and Science” conference held in his hometown.   Robert Johnston was interested in understanding the young earth views.  He contacted Roy Nalin at the churches Geoscience Research Institute  to ask for confirmation that he could indeed attend despite being a lay scientist and believing in a long chronology; he was assured he was welcome.  He registered, then sometime later was contacted by Ed Zinke’s secretary who informed him that there was a “restricted list” of invitees and the conference was full and therefore they were revoking his registration.  Pastor McLarty was admitted to the same conference but publicly instructed before the meetings by a conference organizer to not ask questions or make any comments.

Others told of a local church where the pastor approached them and asked them to stop asking questions in Sabbath School. Others had church boards who voted to remove women from positions as church elders. Even progressive churches such as Pioneer Memorial send out a Christmas card showing the unbalanced all-male pastorate.

And then we opened to each other a little of our bruised hearts. Death of a four-year-old daughter—the unanswered prayers still unanswerable. Recent death of an adult daughter—we all wanted to die before our children. Sudden text message of a loved one in urgent care. Pain at continued persecution and denial of the blessings and rights due homosexual friends and family. Things all Adventists everywhere should be able to talk about in the freedom of God’s love and the humility of our shared humanity.

So, what’s the big answer?  What’s the bottom line?

To be with a group of people
formed in the furnaces of Adventism,
moving through literalism to spirituality;
from ignorance, through education, to insight;
from narrowness to broad;
from anxious personal rightness to warm concern for others;
from certainty to curiosity;
from shallow to deep–
is a wonderful way
to spend a week.

Near Coral Sands State Park we found the lithified tracks of three-toed dinosaurs and web-footed “croco-bunnies” left in their inter-dunal pathways. Not a single living sample of those creatures remains alive on earth. If God intelligently designed them, they filled their function and were replaced. If Satan engineered them using God’s tools, they proved that Satan could not do it better than God. They are all gone. No remnants. Only tracks in the historical sandstones.

But later we also found lithified pine trees, giant trunks embedded in volcanic ashes that perhaps had doomed dinosaurs. These trees volcanic fire scorched barks revealed that they are a recognizable type of tropical pine, Araucaria pines, that grew 150 million years or so before the present. Yet very similar pines today still grow in tropical forests like the Chilean pine or “monkey-puzzle tree.” At least 20 living species have evolved (because they were created capable of evolving or adapting) and flourished from those intelligently designed  ancient trees, with the very little changed remnants still alive over 150 million years later.

A lonesome tribe of 18 individuals like our group is much too small (even if we had all been 50 years younger) to sustain ourselves by natural reproduction. Scientists say that even with “a strictly managed mating regimen” at least 40 individuals would be necessary to survive more than one or two generations without becoming an inbred group of unsustainable, unsurvivable weaklings. Planning, for example, a sustainable human colonization of Mars requires 14,000 to 40,000 humans to guarantee long-term survival.[5]

In reality only one of our group was young enough to make his mating productive. Not that we weren’t mostly fathers and mothers. One of the most obvious markers of our tribe was an overwhelming concern for our children and their children–and for your children, too.

Are progressive Adventists who are ready to be honest with the scientific facts and anxious for our theologians to expand our doctrine of Creation to become big enough to fit the Creator’s actual size headed for extinction or long-term survival? Are we the dinosaurs long gone or “monkey-puzzle pines” destined to survive against all odds for millions of years? I guess that depends upon the simple question of how many active, vigorous, virile members decide to join this particular kind of a forward-looking Remnant, my Adventist tribe.

If you wish to study further some of the scientific and theological details our group was exposed to you can read a brand new article published in Adventist Forum’s SPECTRUM magazine this month: SPECTRUM, Volume 47, Issue 2, 2019, by Gerald Bryant, “Things We Do Not Know, Job’s Dilemma and the Future of Adventist Geoscience,” pages 36-40.

(In the same issue Trevor Lloyd’s “Genesis One and the Sabbath—A Twenty-First-Century Confirmation of the Sabbath Teaching in View of the Literal/Non-Literal Discussions,” pages 12-28, is also deep and seminal for an Adventist Creation Theology of the future.)

Those wishing to personally experience the evidence for themselves in a pastor-led, Adventist geologist-taught exploration can sign up for the next “TALKING ROCKS” tour to be held in October, 2019.

[1] Navajo sandstone has been called Aztec sandstone in Nevada, and Uinta or Nugget Sandstone in parts of Utah and Colorado.

[3] Lamentations 4:3 suggests: “…my people have become heartless like ostriches in the desert.”

[4] A nickname given to prehistoric reptiles such as Pravesuchus, more mobile than modern crocodiles whose tracks we saw preserved in the interdune deposits–wet areas at edges of frozen, lithified sand dunes.

(Illustrations are all photographs taken by Deanne, Ted, or Jack Hoehn, except for the living Monkey Puzzle Pine.