Am I My Sista’s Keeper? Part 2 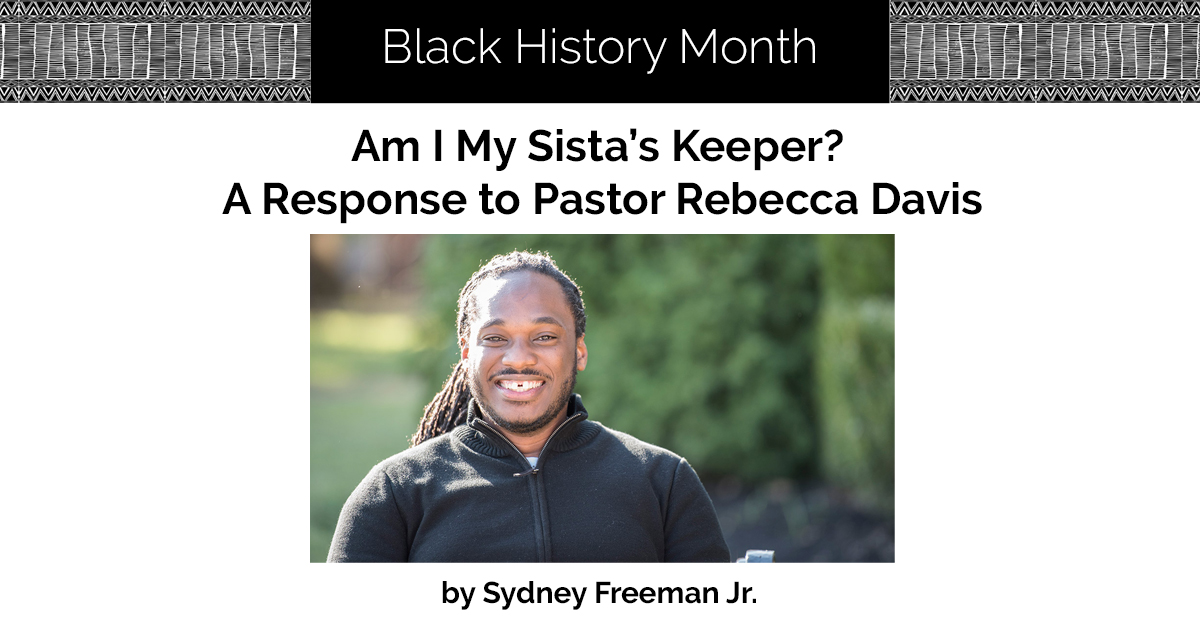 A response to “Am I My Sista’s Keeper? Women’s Ordination and the Black Adventist Church” by Rebecca Davis.

In October of last year, I co-authored an article on the Adventist Today website titled, Adventist History, Herstory, and Ourstory: Towards a Peoples’ History of the Origin of Black Adventism[5]. In the beginning of the article my co-author and I criticized the denominational leaders that participated in the 2018 Annual Council of the General Conference of Seventh-day Adventists for wearing costumes reminiscent of colonial times, and the General Conference President, Elder Ted Wilson, for some of his remarks. We felt that the sentiments from our denominational leadership were both insensitive and tone deaf. We also felt that these and other comments spoken throughout annual council were “dog whistles” that were condescending to Black Adventist culture and worship.

We received a range of feedback for the article in the comments section of the post. However, it was a comment by my friend, Pastor Rebecca Davis, that arrested my spirit. She spoke of her disappointment that Black men in the Adventist church had been willing to call out the sin of racism in the church, but had not engaged in conversation or voiced disappointment when the discussion was about the ordination of women. Although her critique was not confrontational, it was direct. I had to sit with it for a minute, to do some self-reflection regarding my own advocacy. It is easier to stand up for Black women when they are a relative or close friend. However, Black men should advocate for our women when the cause is just, just because it is right.

After reflecting on what was shared, I reached out to Pastor Davis to gain clarity and understanding regarding her position. Her short but powerful comment was what I call my “James Cone/Delores S. Williams” moment. Dr. James Cone was widely seen as the founder of Black Liberation Theology. However, his student, Delores Williams, challenged his critique of race, because it did not include a gender lens. She later developed what is now referred to as Womanist theology, which is a theological framework that seeks to empower and liberate African-American women in America, centered in traditions, practices, scriptures, and biblical interpretation. Speaking of Cone’s and Williams’ relationship Araujo-Hawkins says,

Cone hails Delores Williams, a former student, as “brilliant,” claiming that no one offered a sharper or truer criticism of his work. He claims that at the time when Williams and other up-and-coming womanist theologians were perfecting their ideas under his tutelage, he was not ready to hear what he needed to hear.[6]

My communication with Pastor Davis helped me to realize that I still had work to do to ensure that I was inclusive in addressing the justice claims of Black women, particularly in the church. It is important that we as Black men help to center the voices of our women. We should be working in partnership with them as equals. Her questions challenged me because I had to interrogate myself and ask questions about how I used my platforms and spheres of influence as a religious thought leader and academician to advocate and support Black women and their claims for justice in our church.

I agree in part with Pastor Davis that some of why Black men in the Adventist church may not stand with their Black women counterparts is not their fault. Adventist theology, although robust regarding a specific day of worship, the imminence of the second coming, and the importance of health and education, is incomplete. This may seem heretical to some. But I am convinced that Adventist theology, although it nods to the notion that we should help the marginalized, does not center the needs of people of color or women. It has been applied universally across nations, but it has not addressed women, specific ethnic and racial cultures, or sexual orientations. Therefore, Adventist theology is limited in its scope, relevance and applicability to underrepresented populations.

I am sensitive to the fact that Adventist theology is the theological framework that many of our Black male clergy have been socialized into, and have dedicated their lives to advancing. Many Adventists, particularly Blacks, have been told that their gender and racial and ethnic culture is subordinate to Adventist theology. Therefore it is easy to see why Black Adventist male leaders have not always been the forerunners in advocacy for women’s rights in the church, but have instead been reactive. The truth is that the issue of women’s ordination is about power: who can have it and who won’t. And power does not concede without a fight. I believe Black men know this, and consciously and unconsciously made decisions to preserve themselves, given that much of the church’s top leadership is white and male.

Black males in the church, both clergy and non-clergy should support our sisters in common cause, particularly in regard to women’s ordination—not because someone has urged you to, but because it is right.

Dr. Sydney Freeman, Jr., is an associate professor at the University of Idaho. He serves on the Board of Directors of the American Association of University Administrators, which honored him with the “2015 Emergent Leader of the Year” award. He is managing editor of the Journal of HBCU Research + Culture and is founder and editor-in-chief of The Journal for the Study of Postsecondary and Tertiary Education.