“Against the Wall” Holds First Event at Andrews University 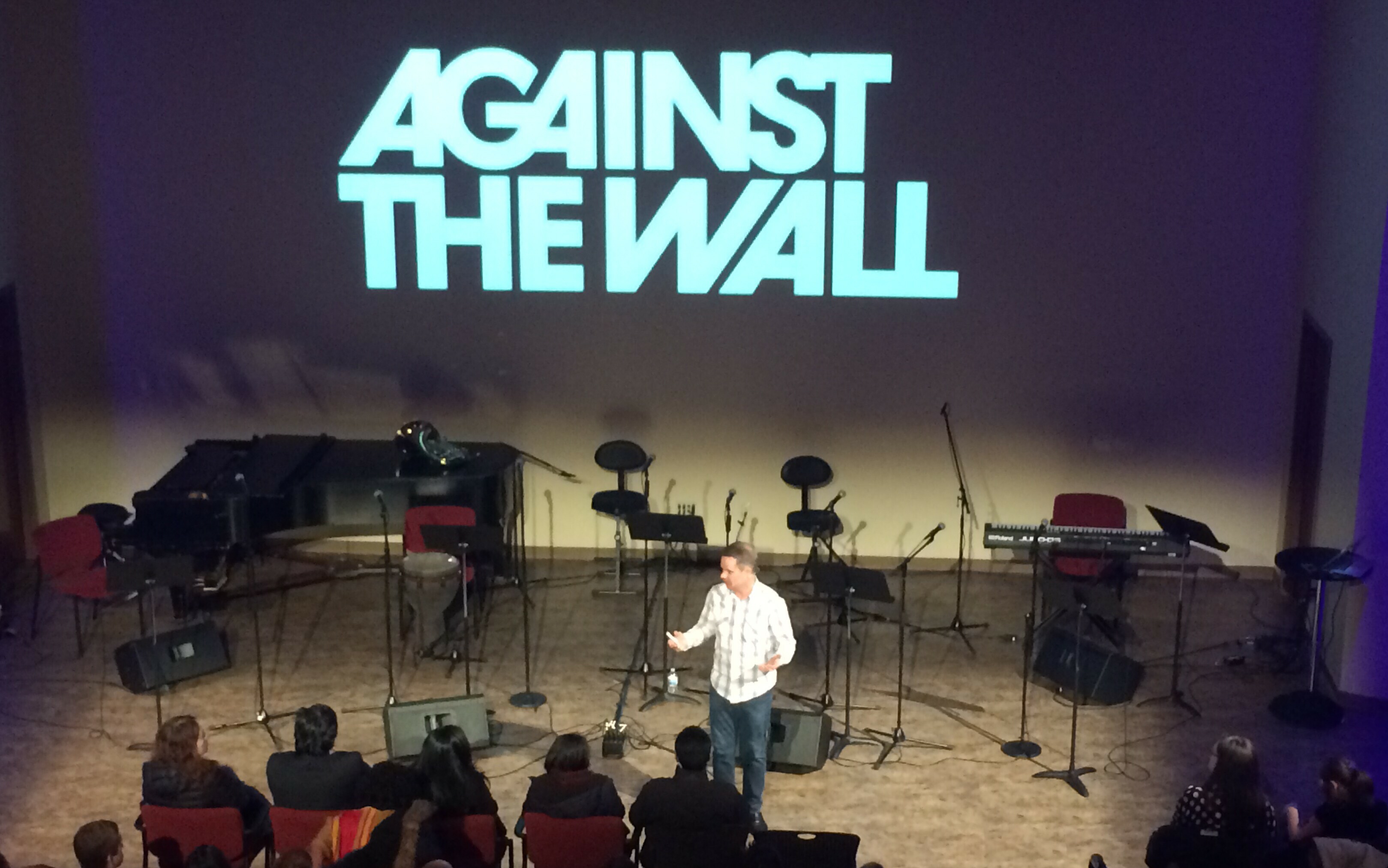 Prior to this event, the primary work of Against the Wall has been posting essays on the ministry’s website. Contributors have included Doug Morgan, Shawn Brace, Claudia Allen, Marcos Torres, and Steve Allred. Nixon and Gibson were also featured on the Adventist Peace Radio podcast.

Nixon kicked off the event by speaking at the university chapel on Thursday morning. He clarified the meaning of the name, which has a two-part significance. First, Jesus came to break down the wall of hostility that separates people groups (Eph. 2:15). Jesus is against the wall. Second, the name is to recognize that oppressed people have their backs against the wall, and we are all called to stand in solidarity with those experiencing such injustice.

Nixon expressed the need for the Adventist denomination to hold a sustained dialogue regarding racial injustice and reconciliation. He called for Adventists to resist moving the conversation immediately to issues of policy, that a deeper work needs to happen in the hearts and minds of Adventists. Nixon warned that too often we have a “solution-based mentality” that skips over difficult conversations and attempts to go directly to a quick-fix instead of engaging in the difficult conversations that can ultimately bring healing. If a solution is not quickly identified, then the conversation is too easily discontinued prematurely. Rather than merely ask, “What is the solution?”, Nixon encouraged listeners to ask, “How can I be part of the healing?”

Empathy was a common theme during the weekend. Nixon stressed the need to approach people with “gospel-infused empathy.” Gibson carried this theme in Friday night’s vespers and his Sabbath sermon. “Empathy will not lie to you,” he said. Society, higher education, and even the church will lie to us, but empathy will never lie, Gibson declared. That is, the more deeply we seek empathy with others, the more deeply we will understand each other and our social situation.

Before Gibson began speaking for Friday night’s vespers program, attendees were led through an exercise of privilege, where certain people were allowed to enter the auditorium while others were delayed. Once the crowd was seated, Ted Wilson, president of the General Conference of Seventh-day Adventists, spoke to the assembly via a pre-recorded video. Wilson called for unity and total student involvement, themes that were consistent with the topic of bringing down the walls that divide us.

On Sabbath morning, the three largest congregations on campus addressed the weekend’s themes, with each pastor wearing black-and-white Against the Wall t-shirts. At Pioneer Memorial Church, which is the main campus congregation, Pastor José Bourget and pastor Taurus Montegomery spoke about ministry partnership, and Dwight Nelson addressed reconciliation in his sermon. Pastor Michael Polite set the stage at New Life Fellowship by inviting Michael Nixon to speak about Against the Wall. Ty Gibson was the guest speaker at One Place, where he further develop themes he had addressed at vespers.

The weekend events concluded on Sabbath afternoon with The Agora, a recurring campus event that explores pressing questions in a format that combines features of a debate and a forum. Garrison Hayes, the seminary student who leads the ministry team, explains that The Agora “exists to have relevant conversations on difficult or controversial issues.” To end Against the Wall, Hayes led a discussion of the It Is Time controversy that took place on campus last year, where racial justice took center stage. Chaplain Michael Polite and professor Andrew von Maur debated various facets of the situation, including both interpersonal and institutional features of protest, racial justice and reconciliation.

While no plans are currently in place, Michael Nixon would like to host Against the Wall events at other universities. “We would love to bring ATW to other campuses,” Nixon told Adventist Today. “It may look different at another campus depending on the particular needs there, but we are extremely motivated to continue this movement wherever it takes us next.”