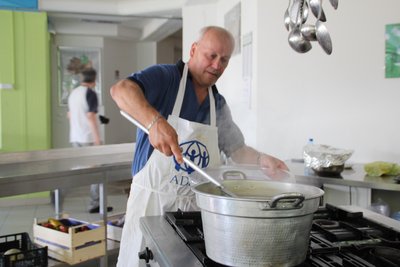 From ANN, September 2: The Adventist Development and Relief Agency (ADRA) in Italy, together with local Adventist church members, are caring for a group of 16 displaced residents after a devastating 6.2 magnitude earthquake struck the central region of the nation August 24.

The earthquake flattened several villages in Italy’s Lazio and Marche regions. It has been reported at least 292 people have been killed, 231 of which were confirmed in the town of Amatrice, which is located in the Lazio province of Rieti.

The 16 guests are staying at the Rieti Seventh-day Adventist Church, where they, along with other displaced residents, are provided with three meals a day. In partnership with ADRA Italy, the church has also stored a number of goods on its property, including food, clothing and medication.

“We will use this material for the needs of our guests and for other needs,” explained a representative from ADRA Italy. “The volunteers have also made an inventory of the medications received, that will be sent to the Red Cross.”

In order to meet the needs of the guests, ADRA Italy has organized volunteer shifts for the five to six volunteers that are needed daily. Volunteers have come from several Adventist congregations in Rome, Bologna, Florence and Pesaro.

According to a worker from ADRA Italy, the agency has also offered to share its food supply with other volunteer organizations that are working in the surrounding area.