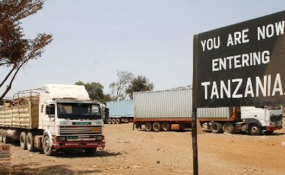 Adventist youth camped at the border of Tanzania and Kenya last week to protest female genital mutilation (FGM) and unsafe circumcision practices. The purpose of the protest was to protect their peers from forced practices in social tradition that endanger their health.

The Hon. Glorious Luoga, district commissioner of the local government in Tarime, joined a march organized by the youth on Thursday (December 27) through the town of Sirari at the international border of Tanzania and Kenya. This is an areas where the traditional practices are widespread.

Some 750 Adventist youth marched on the main road from their campsite at Sirari Secondary School to the town center holding banners with messages designed to educate society about how risky it is to conduct the cruel traditional culture with the emerging generation.

Pastor Euud Musimu, chairman of the organizing committee, told Adventist Today that he and his colleagues came up with the idea when they were planning a camp meeting in the region most affected by these cruel traditional practices. They decided it would help not only Adventist young people, but also give “a hand into supporting government efforts in eradicating this useless culture.”

Yusuph Kazi, an assistant leader who helped organize the event, said he was happy it was so successful. Mariam Kinogo, a 17-year-old young woman from the Sabasaba Adventist church who is in the traditional age group for FGM, said she was happy to be a part of of the protest and even if she could be “offered a million and more” she could not choose FGM.

The protest march ended with the group returning to camp site where Luoga spoke. He began by congratulating them for a wonderful event. He thanked them for the invitation to join the march and said he like to speak to youth because they are good at spreading the news. He congratulated the Adventist youth group on the activities they conduct in the community and promised to give them most of the things they had asked from him.

Speaking about FGM and unsafe circumcision, Luoga shared his personal experience of encountering a bleeding circumcised youth who could have bled to death if Luoga had not shown up early, found him and gotten him to a hospital. Luoga blamed society for holding onto the traditional culture. “I am calling on Tarime District scholars to stop being hypocrites,” he said. “Why am I saying that? It is because a Tarime learned person who is a tribal leader can decide to take their children from Dar es Salaam [the capital city] and other towns, bring them here [villages in tribal areas] for FGM and unsafe circumcision, putting their children in the hands of untrained people claiming to preserve their culture while knowing how dangerous this is.”

Luoga also said, “Religion provides safe places to bring up our youth. I as a Roman Catholic and other Christians condemn this traditional culture and I congratulate you who have decided to join the Tanzania government in the campaign to eradicate this problem because it’s for our own good.”

Before Luoga spoke, a statement prepared by the youth group leaders was read by Samwel Mseti, one of the Tarme area Adventist Youth coordinators. Mseti thanked Luoga for including time in his busy schedule to join the Adventist youth in the important occasion. “This camp meeting has been a refuge to about 25 youths who fled being forced into FGM and unsafe circumcision. We have protected them here and congratulate them for a brave decision.”

Mseti described how the youth extended a helping hand to the community as they visited orphanages, prisons, hospitals and people living in difficult situations by donating needed items paid for from the pockets of the young people. “Over the last three years the youth have donated almost 1,000 liters of blood to hospitals to save lives.”

On Sabbath (December 29) Pastor Ezekiel Ojwang, president of the Adventist denomination’s Mara Conference, was the preacher. He congratulated the young people on their decision to leave their homes to join the camp during the holidays. He recalled the experience of the Apostle Paul calling on the youth to be evangelists in the world.

Ojwang expressed his amazement about the youths’ creativity in such a well-designed camp under the leadership of Tyson Ibrahim Jacob, a Master Guide and Adventist Youth Leadership Award holder, who led the building committee for the event. He asked for the names of the young people involved to be delivered to his office because what they accomplished with the camp “is something to be honored.”

Pastor Adili Ndimangwa was the main speaker throughout the week, teaching from the Bible on several topics related to the protest against the cruel traditions of FGM and unsafe circumcision. This included a basic Bible study on “teach me to understand” what is going on in the world, cruelty to children, understanding FGM and unsafe circumcision, and how Bible truth equips believers to deal with “the way of this world” in 2 Timothy 3:16-17.

Tarime region Adventist Youth organization includes ten districts in Tanzania with more than 30 Adventist congregations. It is one of the leading youth ministry programs in the Mara Conference, which has over 400 local churches and 150,000 church members. It is one of four local conferences in the Northern Tanzania Union Conference.

Tysan is the regular reporter for Adventist Today in east and central Africa. The photo is of the international border between Kenya in Tanzania at Sirari, Tanzania.