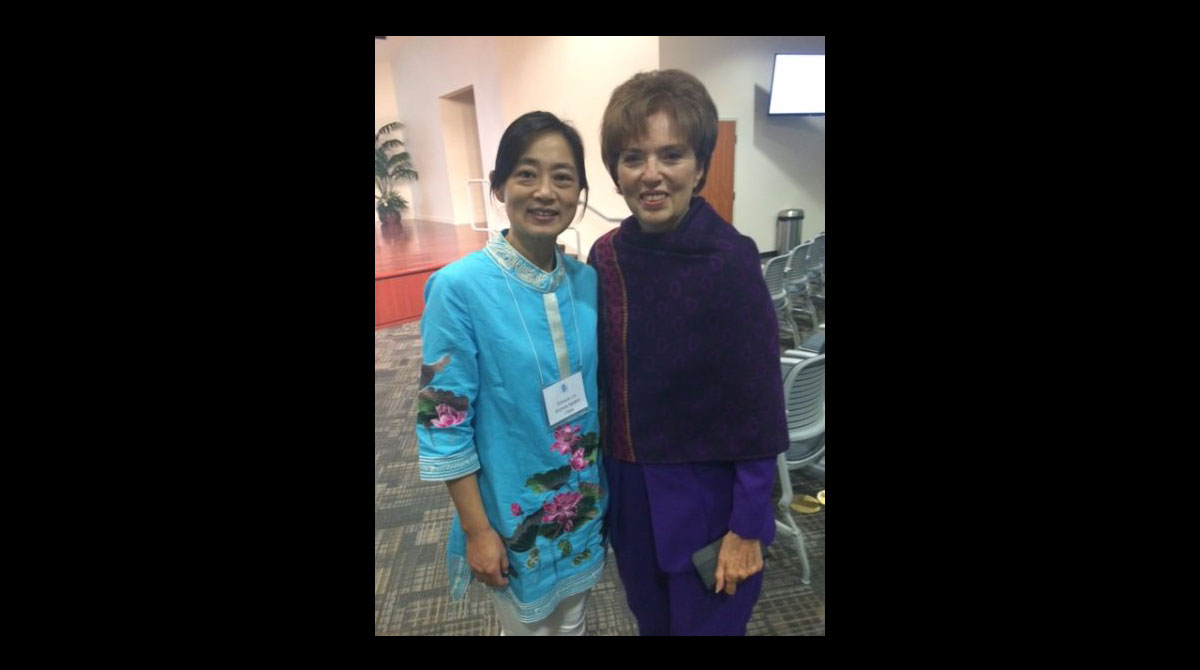 By Jiggs Gallagher, October 28, 2016:     The Association of Adventist Women held its annual a three-day conference at La Sierra University October 21-23, bringing scores of women and a few men to look back and look forward regarding the role of women in the denomination.

Rebekah Liu was an enthusiastic and engaging keynote presenter on Friday morning, telling her life story as the daughter of an active woman minister in the city of Chengdu in southwestern China. Growing up in the shadow of the Cultural Revolution with its militant atheism, she came under the influence of a Sunday-keeping clergyman of the government-sanctioned Three-Self Movement in 1988, when she was 17.

Her mother had told her she had a dream that a man would bring her a book that would influence her life. Sure enough, the minister presented her with a Chinese language copy of Desire of Ages by Ellen G. White. It turned out he had been the president of the China Division of the Adventist denomination, which was dissolved by Mao’s new Communist government in 1951, almost 40 years earlier. Out of a job as a minister, he reluctantly joined the officially approved indigenous religious movement known as Three Self.

As she read the book, she was taken by the chapter on Sabbath keeping. The story of her life from that point on was, in her telling, a succession of miracles, enabling her to pass college entrance examinations without sufficient study time or tutoring, travel as the first person ever allowed to travel outside China to attend college (to the Philippines to earn a bachelor’s degree—not the normal thing in the early 1990s), to travel to the seminary at Andrews University (AU) with virtually no money for her M.A. in theological studies, and just this past December to complete her PhD in religion at AU.

Meanwhile, her career as a pastor in Chengdu and other cities has resulted in explosive growth for the church in China. In her hometown of Chengdu, there are now 10,000 Seventh-day Adventists.

“My parents always told me, ‘Everything else is rubbish; being a scholar is the ONLY thing in China.’ That’s why I valued education so highly.” She also strove to follow her favorite Bible verse in her career as a minister, Hebrews 11:18: “By faith Abraham,” who left everything to do what God called him to do. “So many miracles in my life proved to me that God really did call me to ministry.”

In 1996, when she had finished two degrees and returned to Chengdu, she thought she would work in the populous city. But her mother assigned her to hike on foot through steep and sparsely populated mountains near the Yangtze River to visit isolated women. She learned to rely more and more on her God and less on her own inflated concept of self. Liu was ordained in 2011, by the laying on of hands by four Seventh-day Adventist pastors, one of whom was a woman.

Photo:  Pastor Liu, keynote speaker at AAW conference, greets Sharon Bennett of Loma Linda, who corresponded with Liu in China before she came to study in the seminary at Andrews University. This was the first time they had met face to face.

Liu painted a picture of both general Christian growth and recent decline in Adventist growth. “China could become the world’s most Christian nation, surpassing the United States, in just 15 years, by about the year 2030,” she said. “However, our church experienced good growth in the 1990s—about 5 percent per year. Now it’s down to 1 percent [per year].” She adds that more workers are needed in China, and more support from members must be encouraged. She also said that the absence of an Adventist presence in China from 1951 until the 1990s means that some attitudes toward the “gifts of the spirit” are somewhat frozen in an American-style post-War vision of Historic Adventism, with a bent toward legalistic thinking.

Asked about General Conference support or tolerance of women’s ordination in her country, Liu noted that the Chinese Union Mission, based in Hong Kong and responsible for the whole nation, is totally autonomous. “The General Conference has a liaison relationship with the mission,” she said, “but no direct administrative control.” She added that the mission itself does not dictate policy to the local churches and their pastors, who are free to set administrative policy in their congregations.

Liu is personally responsible now for two “teaching centers” (similar to seminaries) in Beijing and Shanghai. With 112 students currently, they have produced 50 college graduates, 17 master’s degrees, three PhDs and one DMin graduate.

She ended her talk with a discourse on the spirit of Babylon (Babel) in human nature, saying that uniformity could be thought of as the “image to the beast,” and diversity (including women’s ordination) as its opposite. She wants to empower people with their individual gifts, and then there will be no need to light a fire for evangelism because everyone will want to use their talents and gifts for God.

Dr. Gilbert Valentine, department chair and professor of leadership and administration in the School of Education at La Sierra University, presented a historical review called “Finding Their Voice: The Expanding Role of Women in Early Adventism.” He described an “Adventist spring” for women in leadership, approximately from 1869 to 1872, in Battle Creek. Uriah Smith boasted in 1871 that of 31 employees at the Review and Herald Publishing Association, 20 were women. Women held elected officer positions as treasurer and secretary at the publishing house, the Michigan Conference, and one was secretary of the General Conference during the time after James White’s first stroke in 1865, when he was incapacitated and she wielded de facto executive powers in his absence.

Meanwhile, women were receiving medical education and becoming physicians in the Adventist church. No one complained or blocked their advancement in this profession. But the “Adventist spring” came to a halt in 1872, with a backlash against women in leadership. Valentine noted that women became departmental leaders in the period around World War I, but again there was a tide against them, concurrent with the rise of Fundamentalist Christianity in the 1920s.

Other speakers, including Dr. Nancy Vymeister (a retired Andrews University seminary professor), on “How Long Ordination?” and Dr. Janice De Whyte (an assistant professor of religion at Loma Linda University), on “Women’s Ordination: A Matter of Justice,” presented compelling arguments in favor of the practice.

The rest of the celebration included an Agape Supper led by Dr. Kendra Haloviak Valentine, dean of the division of University Studies and professor of Biblical Studies at La Sierra. Worship on Sabbath and a second presentation by Liu on women pastors in China were heard. Women of the Year awardees at the Saturday evening banquet included Carolyn Lacy, Iris Landa and Dr. Adeny Schmidt. Dr. Fritz Guy and Dr. Randal Wisbey were presented with Champion of Justice awards. Guy is a long time theologian on the faculty at La Sierra and Wisbey is the university president.

A pre-session event organized by the Women’s Resource Center of La Sierra University on Thursday, October 20, drew many of the participants. It focused on preaching and Bible interpretation skills for women clergy.

Jiggs Gallagher is a senior editor for Adventist Today based in Southern California and journalism professor at California State College. The featured photo with this story is Pastor Rebekah Liu, the keynote speaker, and Dr. Lourdes Morales-Gudmundsson, president of the Association of Adventist Women.