Humble Beginnings of the Adventist Movement subject of Major Movie 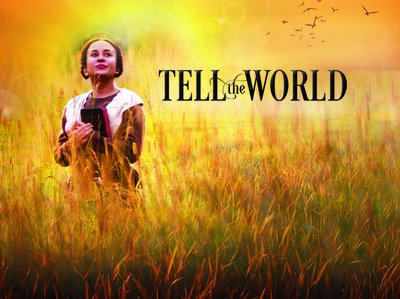 From ANN, July 18, 2016    After years of planning, fundraising and production, Chester Stanley, former president of the Seventh-day Adventist Church in Australia, saw his dream come true with the completion of the Tell the World cinematic production, which tells the history of the global denomination’s pioneers.

Tell the World was produced by Hope Channel, the official broadcast network of the Seventh-day Adventist Church, in Australia. It is the largest media production in the denomination’s history. Its story of the birth and development of the early Advent movement was brought to life by 95 actors, 157 crew members and 1,000 extras.

Tell the World will allow viewers to see the Advent pioneers wrestle to understand scripture, debate theology and overcome bitter disappointment; but through it all, the pioneers were led and inspired by God as they journeyed to find the truth.

The project was designed for members to connect with the Church’s movement and to rediscover what it means to be an Adventist. Tell the World will also provide an opportunity for people who are unfamiliar with the Church to gain a deeper understanding of the denomination that has more than 19.1 million members worldwide.

The world headquarters of the Seventh-day Adventist Church is coordinating the distribution of the project, which will be available in three formats: short historical clips that will be released in August 2016; a television series of six episodes that will air on Hope Channel and stream online in October 2016; and a feature length film that will be available on streaming services, including Netflix, iTunes, Amazon and Google Play at a later date.