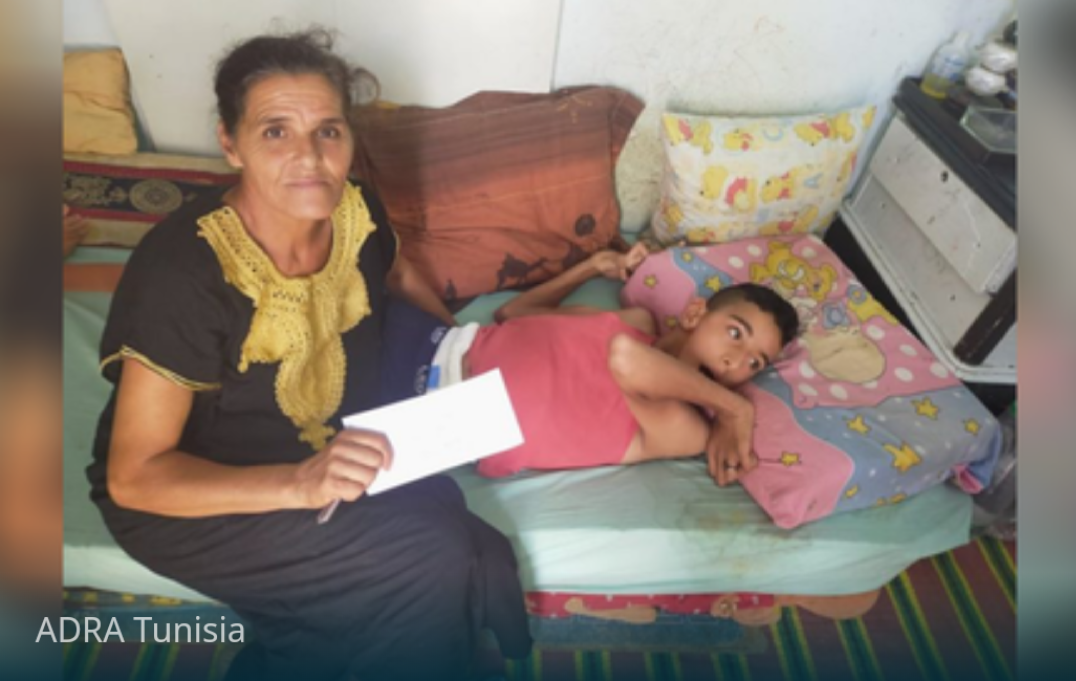 From ANN – 14 September 2020 | Tunisia, located on the Mediterranean coast of Northwest Africa, was already suffering from a bad economy before COVID-19, but with the loss of jobs due to the pandemic, many more people faced a financial crisis. The Adventist Development and Relief Agency’s (ADRA) unconditional cash project in Tunisia has been able to intervene through its unconditional cash transfers.

“Unconditional cash transfers are cash payments provided to financially disadvantaged people without requiring anything in return,” says Samson Bush, ADRA communications officer in Tunisia. “ADRA provided 500 Tunisian dinars (about USD$183) in cash assistance to 145 vulnerable households (approximately 580 individuals) to help those hardest hit by the economic downturn.” According to Bush, the small amount of cash makes a big difference for households receiving the cash assistance. In particular is the story of Naziha*, shared by ADRA volunteers.

Mohammed Ali and another ADRA volunteer were on their way home from delivering the unconditional cash funds in a nearby area when they spotted a middle-aged woman named Naziha pushing an old wooden wheelbarrow down the street with her son, who was crippled, and was strapped into the wheelbarrow with a belt.

“As we watched her, we noticed her pace slowed as she pulled out an old phone and began calling someone,” Ali says. “We heard the desperation in her voice as she began asking for food for her child. ‘I have nothing to feed him,’ we heard her cry out.”

Ali knew they had to do something, but they had given out all of the ADRA cash funds. They waited until she paused for rest and walked up to her, but at a respectful distance. She looked at their badges and asked what ADRA represented.

“We couldn’t help but hear what you said,” Ali told her. “We are volunteers for the Adventist Development and Relief Agency, which is a global humanitarian organization.” They went on telling her about ADRA and how they had been helping others in Tunisia.

They learned that Naziha only received money equivalent to USD$66 a month from the government for her child. With that she was only able to get diapers and medicine, but very little else. She also collected plastic to recycle and sell in order to purchase food.

Ali and the volunteer were also invited by Naziha to see her home. There was no running water or electricity, and the toilet was beyond repair. Winters in Tunisia are long and windy, but she had no heat during the cold months nor air conditioning in the summer heat. Her main desire was to find a wheelchair for her son.

The two volunteers asked for her contact information and promised to submit her name for unconditional cash funds. It was approved, and Naziha was able to receive the unconditional cash. “She said it was the first time in her entire life that she held money equivalent to USD$150 in her hand at once,” says Ali. The money was sufficient for Naziha and helped her and her family receive sustainable support for the time being.

“We have been able to keep in contact with Naziha,” Bush says. “She was able to buy the wheelchair; however, her quality of life has not changed or improved. She’s still living one day at a time, and her life is extremely difficult at the moment.”

Bush says that ADRA doesn’t have any more funds to help her, but is working to see how they can further assist.

“I know God put us there at the right place and the right moment to see the needs of this poor woman and her son,” Ali adds. “We were able to make a difference in her life.”

For more information about ADRA’s response in Tunisia, visit https://www.facebook.com/adratunisia

*Disclaimer: ADRA Tunisia has the full permission of Naziha to publish her story and photos.

Adventist News Network (ANN) is the official new agency of the Adventist Church.