Part 1: The Church in Finland Led the Way 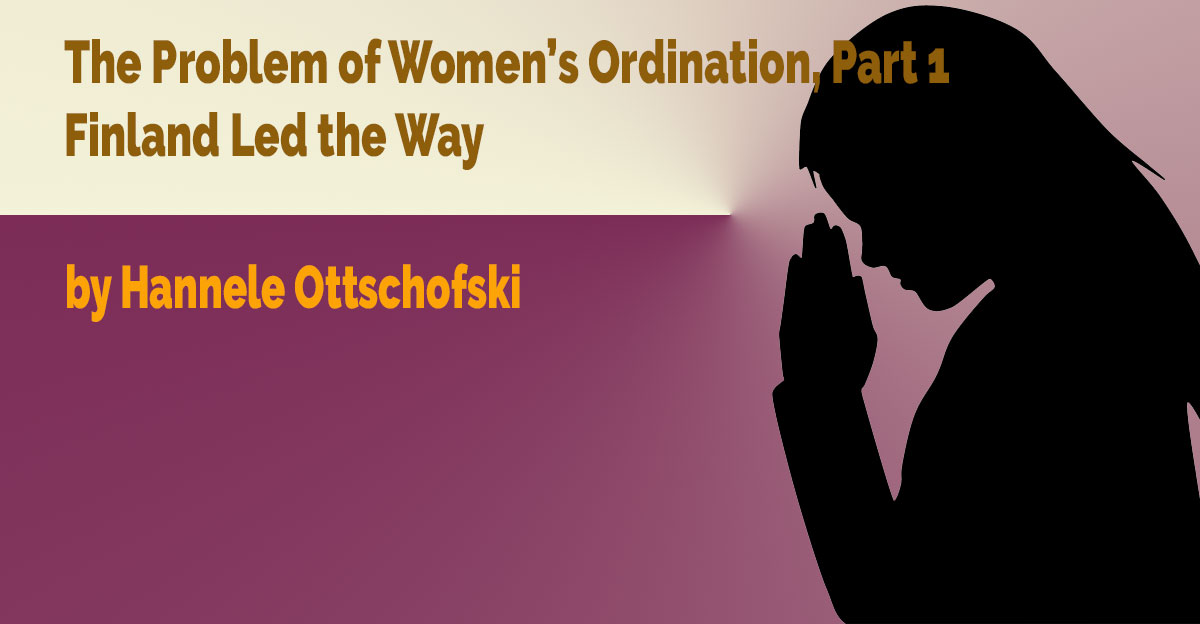 I remember well how, in the winter of 1957, a major evangelistic campaign was held in the capital of Finland, Helsinki, in the newly completed church building in Castreninkatu. The big hall held about 400 people, and it was so crowded that many still had to stand. We children were allowed to sit on the steps to the podium. From there we listened to the evangelist Elsa Luukkanen preaching and captivating people with her message. With her own conversion story, she not only moved the audience to tears, but tears also ran down my cheeks as the message of God’s love hit my heart. At the end of the evangelistic campaign, 80 people were baptized in the spring.

Elsa Luukkanen and her colleague Aino Lehtoluoto were pioneers in evangelism in their country. For these two women and the many other women in Finland who worked in evangelism, the question of ordination never seemed to be important. The people they served did not care. These women had the opportunity to serve God, their church and the people wherever they went. That was enough for them. They responded to the call and did what they could.

During the war years, when almost all men were on the front lines, women were especially needed. The ordained pastors could not stay at home to encourage the people. Neither could they hold evangelistic meetings. At that time people readily accepted the word, from anyone who could preach the gospel. And Elsa was one of many women who felt compelled to proclaim their Lord.

These faithful women worked for 30 years in evangelism, holding meetings and preaching in homes, halls, theaters, and churches. They walked for miles or traveled by train or horse-drawn carriage in any weather to meet their deadlines. They played their instruments, sang of the love of God, and spoke to people wherever they encountered interest. Elsa concluded her life mission with the words, “There is a living God who does wonders and cares for all people.”[1]

It was not that in 1957 there were no male pastors in Finland who could have held a great evangelistic campaign. The leadership of the church deliberately called this woman to the capital. Elsa had said several times that she would never preach in the capital, but God led her there for family reasons as well. The meetings were so crowded that each event had to be repeated. Elsa was able to do counseling in an adjoining room, and her sister coordinated the appointments, so that Elsa could concentrate on prayer and Bible study with those interested. Two other Bible workers were appointed to assist her in this work. At that time there were many “Bible Sisters” in Finland, as they were called, ministering to the churches and proclaiming the gospel. And yet, the success of this evangelistic campaign was new even to Finland. However, the baptisms that I remember well, were performed by male pastors. For Elsa Luukkanen and the other Bible sisters it was not important who baptized the believers. They followed their vocation to proclaim the word of God. “The love of Christ constrains us, as we have realized that one has died for all.”[2]

In 1968, when the leadership of the Finnish Union inquired about the possibility of ordaining such women, it was my father, the secretary-treasurer of the Union at that time, who wrote that letter. But I do not remember that we talked about it at home. This request was one of the factors leading to the Mohaven meetings on the ordination of women in 1973.

Although Finland was the first European country to give women the right to vote in 1906 and was a trailblazer in gender equality, the Adventist church In Finland was always anxious to comply with the rules of the world church. Thus it is easier to understand their handling of ministerial credentials. The first native preacher “person” was a woman: Alma Bjugg. She had been a commander in the Salvation Army and was thus recognized as a qualified leader.

The SDA Yearbooks both in 1904 and 1905 list Bjugg with ministerial credentials. In 1909, however, she was granted the accreditation as a Bible worker. Apparently at that time pastoral credentials in the whole Adventist Church were accorded not according to the work done, but according to gender. Alma Bjugg’s work had probably not changed, but there were now more male pastors.[3]

The statistics for 1949 illustrate this trend. The church in Finland lists twelve ordained ministers. There are also twelve licensed ministers – all men; and 36 licensed missionaries, 25 of whom were women. Among these 25 women, 11 were employed in institutions. Of the remaining 14, nine worked as pastors, but were not accredited accordingly.

The division journal “Northern Light” published reports on these women’s evangelistic campaigns, confirming that they were actually working as preachers. In other words, in 1949, credentials were issued to at least nine women which did not correspond to the nature of their ministry as preachers.

It is estimated that since the beginning of the 20th century, between 20 and 40 women in Finland worked as preachers. And yet Alma Bjugg is the only one who had ministerial credentials!

The Finnish Union surprised both the Northern European Division and the General Conference in 1968 with their request to correct this situation. However, they did not ask permission to grant ministerial licenses. Finland wanted to ordain these women. W. Duncan Eva, President of the Northern European Division, forwarded the request of the Finland Union and consulted with W. R. Beach, the secretary of the General Conference. Beach replied that Adventists had not ordained women in the past. He suggested that the GC and the division leadership should take up “the problem” during the 1968 session. These two letters triggered a discussion that is still ongoing. The ordination of women is still a “problem”.

Gender equality today forms the basis of our life. Some say that as women we have already achieved so much, we should now be satisfied. And yet there are many areas where equality still does not work. This includes discrimination against women in churches which refuse to treat pastors equally, regardless of their gender.

For some of this maltreatment, we as women are in part responsible ourselves. Why do women still choose men as their representatives in parliaments? Why do women not ensure that more women are sent as delegates to church constitution meetings? Why are women in our church often not interested in seeing and supporting women in the ministry? Why do we not champion women pastors so that they receive the same esteem as their male colleagues, including ordination? Why do we not speak up?

Women have always had to fight to gain their rights. Many women fought for women’s suffrage and the right to be treated equally before the law. It was not easy for them to enforce that. As Hillary Clinton said in her speech in Beijing on September 5, 1995, “Women’s rights are human rights and human rights are women’s rights.” This is also true in churches.

Meanwhile, as women, we are glad that we no longer have to fight alone. Many men are campaigning for women’s rights. And even in the religious world women are no longer alone. Former US President Jimmy Carter accuses the leaders of some churches of discriminating against women in order to “pursue their own selfish ends.” Discrimination against women, he writes, is not only a violation of human rights, but also contradicts the teachings of Jesus. In 2009 Carter explained that he was leaving his Church where women are not ordained ministers.

Unfortunately, a man like Jimmy Carter could not be a member of the Seventh-day Adventist Church for the same reason, because we also discriminate against women by denying them equal treatment with their male colleagues. While they can fulfill all the functions of a pastor through commissioning, access to leadership is associated with ordination, which they are not entitled to.The life story of Elsa Luukkanen, written by Olavi Rouhe „Elsa, Sweet Singer of Finland“. (Pacific Press Association, 2016). ↑