A Lesson at the Dead Sea 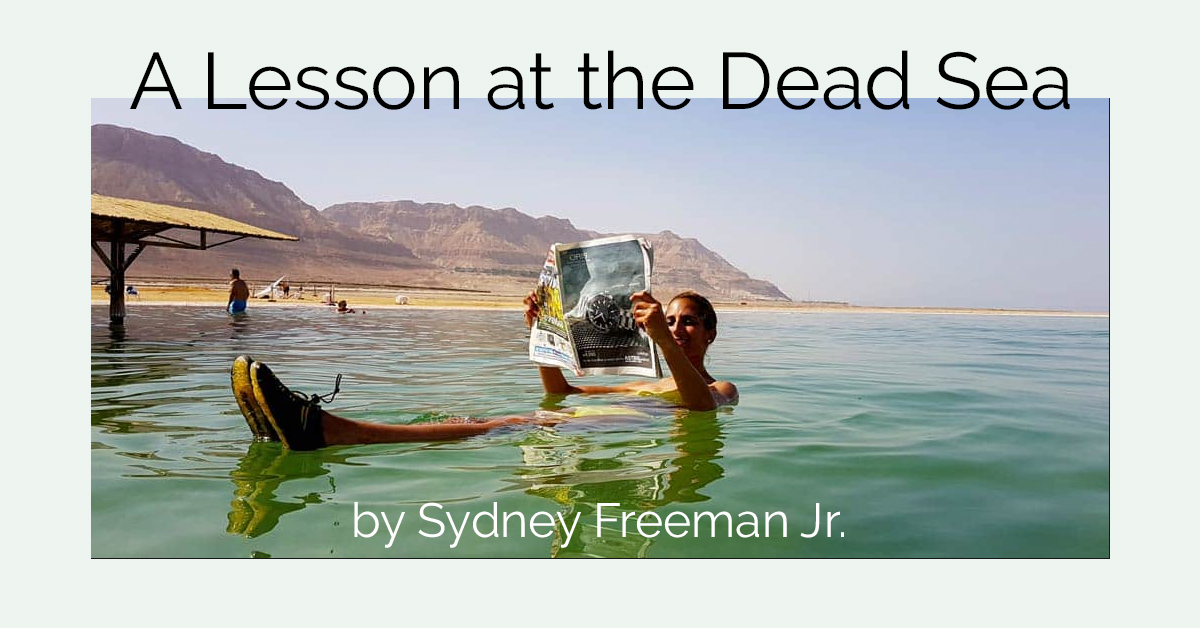 Recently, I took a tour that had stops at Biblical sites such as Bethlehem, and Jericho. Each stop, I learned, was considered a part of the Palestinian territory. However, the highlight of the trip was the final stop, which was the Dead Sea. It is known for its beaches, so I was excited. As another tourist and I arrived closer to the swimming area we saw signs that said “The Lowest Place on Earth.” The Dead Sea is 1,412 feet below sea level, truly making it the lowest point on the planet. The extremely high concentration of dissolved mineral salts in the sea water there causes the water to be denser than that of plain fresh water. Since the human body is less dense than the density of the water, one’s body is more buoyant in the Dead Sea.

I was looking forward to seeing if I really would be able to float in this mystical water.

The temperature was hot: around 100 degrees. After I changed and began walking down to the water’s edge, I could see that the water was blue, but not clear. And the sand was extremely hot, as the salty sand absorbed the sun. As I looked around I saw men and women covering themselves with a black mud-like substance. A couple offered me a handful of the dark material. I asked why people were taking the substance from the seafloor and rubbing it on their bodies. They explained that many believed that the mud held properties that made them look youthful. And indeed when they put the substance on and the sea water hit their skin, there was a unique glow that came from the beaming of the sun and the mixture of the water and the mud.

As soon as my feet touched the floor of the sea, which is more like a massive lake, I felt the extremely slippery mud-like substance. I was determined to stay on my feet—but within 10 seconds, my feet slipped from under me and I was on my back. It was a weird feeling, because I did not fall into the water, but floated. My first urge was to fight it, and I did my best to stand back up. And I was able to stand for about another 10 seconds, but by that time I had moved from the shallow part to about 5 or 6 feet, and my legs just flipped up. For about two minutes, I fought for control, but at that depth I could not fight nature. The struggle made my neck hurt, as I was resisting letting my head touch the water, although the rest of my body was floating parallel on the water like a surfboard.

Then I thought to myself, what if I would just let go and stop fighting this substance that I was told would support me?

Soon after I stopped fighting the water and relaxed my whole body, including my head, I began to enjoy the wonderful experience that I had been told about, and that others around me were appreciating. This was a profound moment for me, for I was unable to see beneath, and was not totally confident that something that I could not see could take care of me.

I learned in that moment that there are times in life that you may not be able to be in complete control of the waves and currents of life, but as a believer, I know that God is guiding me and holding me up. And though I can’t see him, I know that ultimately he won’t let me drown. If I just stop fighting the process, I will be all right!

Dr. Sydney Freeman, Jr., is an associate professor at the University of Idaho. He serves on the Board of Directors of the American Association of University Administrators, which honored him with the “2015 Emergent Leader of the Year” award. He is managing editor of the Journal of HBCU Research + Culture and is founder and editor-in-chief of The Journal for the Study of Postsecondary and Tertiary Education.