A Cursory Look At a By-Gone Era 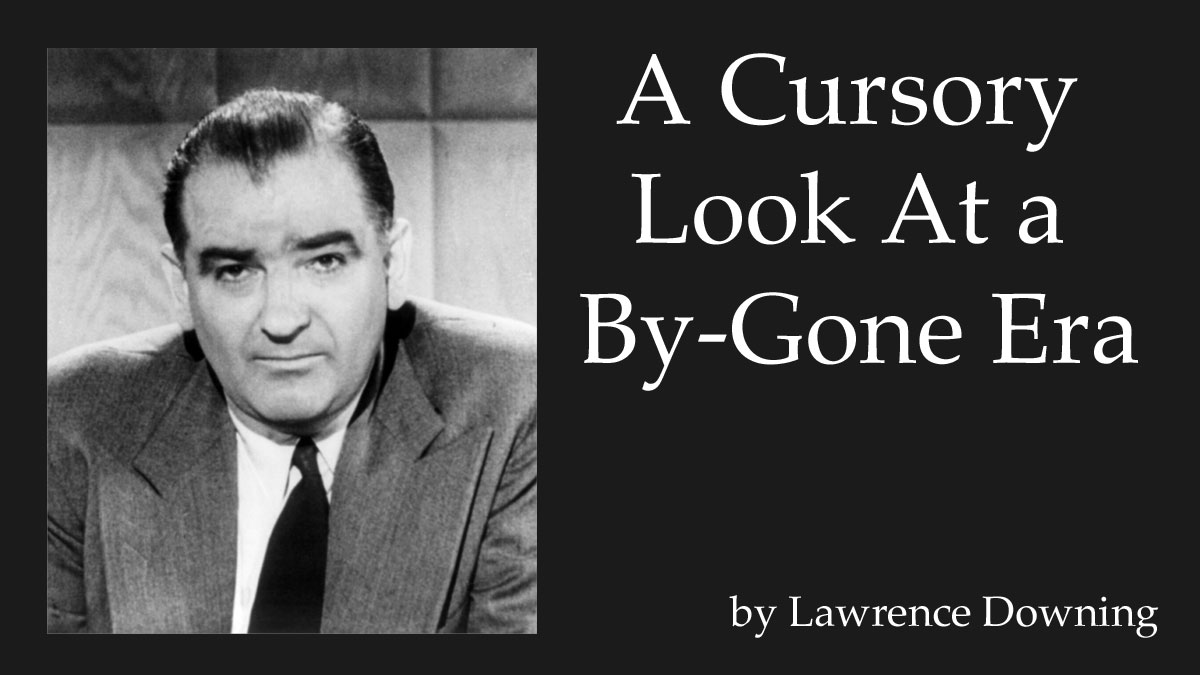 by Larry Downing, October 3, 2016:    In the late 1940s and early 50s Joseph McCarthy, a senator from Wisconsin, captured America’s attention. In his quest to expose and root out communism from America’s institutions, both public and private, he called before a Senate sub-committee individuals from the highest levels. He especially targeted governmental agencies, including the U. S. Army.

McCarthy was not the first to capitalize on the Red Scare.  The House Un-American Activities Committee (HUAC) had been established in 1938. Their task was to investigate and identify those with left-leaning views who had infiltrated various organizations, both governmental and private.

The Wisconsin senator, who was not a member of HUAC, was chair of the Government Operations Committee and its Senate Permanent Subcommittee on Investigations. In his role as chair of these committees, McCarthy initiated a quest to identify those in government who held left-wing inclinations or were suspected Reds. He developed a ruthless interrogation process. He badgered and threatened witness after witness. The Senator’s domineering and threatening methods brought fear into all who were questioned by him until a fateful June 1954 day when Joseph Nye Welch dared challenge the process and methods McCarthy used to intimidate and cow people. Wikipedia under the heading “Joseph McCarthy” says well what led up to the McCarthy/Welch exchange and its aftermath.

On June 9, the 30th day of the hearings, Welch challenged Roy Cohn to provide U.S Attorney General Herbert Brownwell Jr. with McCarthy’s list of 130 Communists or subversives in defense plants “before the sun goes down.” McCarthy stepped in and said that if Welch was so concerned about persons aiding the Communist Party, he should check on a man in his Boston law office named Fred Fisher, who had once belonged to the National Lawyers Guild, a progressive lawyers association. In an impassioned defense of Fisher, Welch responded, “Until this moment, Senator, I think I never really gauged your cruelty or your recklessness …” When McCarthy resumed his attack, Welch interrupted him: “Let us not assassinate this lad further, Senator. You’ve done enough. Have you no sense of decency, sir, at long last? Have you left no sense of decency?” When McCarthy once again persisted, Welch cut him off and demanded the chairman “call the next witness.” At that point, the gallery erupted in applause and a recess was called.”

McCarthy never recovered from this explicit challenge. His hold of fear that he had used to dominate people was broken. He was condemned by the Senate and faced expulsion, which he managed to escape. He died in 1957 at the age of 48.

There are lessons to be learned from events like those associated with what has become to be known as the McCarthy era. People still attempt to use their positions of authority to threaten and intimidate in their desire to get their way. Those who surround individuals who practice power-control will themselves be fearful to call to account the one who leads the charge to purge the non-compliant. The one who dares to challenge the accuser or counter the manipulator may well experience the leader’s wrath. The prospect of termination is a fearful thing when there is a mortgage to pay. However, there now and again comes along the unsung hero who dares say, “Sir, have you no decency, at long last? Have you left no sense of decency?”

History teaches us numerous lessons, if only we would listen. Someone once said something to the effect that if we forget the past there may well be cause for fear in the present and the future. It may also be useful to consider another individual’s remarks. Supreme Court Justice Robert Jackson, in West Virginia State Board of Education vs Barnette (1943), said words to the effect that “Those who set out to eliminate dissent soon begin to eliminate dissenters, and the only unanimity they achieve is the unanimity of the graveyard.” Those who have ears to hear. . . .

Lawrence (Larry) Downing, D.Min., is retired after more than 40 years as a parish minister serving Seventh-day Adventist churches on both Coasts. He was also an adjunct faculty in the School of Business and the School of Theology at La Sierra University. He is married to Arleen. Together, they have three grown children and six grandchildren. Larry and Arleen reside part time in Rancho Cordova, CA, and in San Luis Obispo, CA.