A Canary in the Mine?

by Andy Hanson, April 26, 2015:     The Northern California Conference of Seventh-day Adventists (NCC) published its Annual Report in the March 2015 issue of the Pacific Union Recorder. I have not been able to find an online graphic of that report, so I photographed pages 3 and 4 and included them as a footnote.*

The following facts, published in this Report, supplied evidence for what I have long suspected: Adventists spend a great deal of money for a very, and I mean VERY, modest return when it comes to increasing Adventist membership in any but Third World Countries.

Consider the following NCC Report for 2014:

Use of Retained Tithe:

Cost to add a new member using a percentage of Retained Tithe: $98,240.

This is a Conference that boasts 155 churches, 32 schools, Pacific Union College, four hospitals, and at least 14 radio and TV evangelistic programs.

I am stuck with the observation that the NCC exists primarily to provide salaries for its employees. While it is true that the NCC Corporation provides an organizational framework to “do good,” these good deeds have not resulted in a significant growth in membership.

In this issue of the Recorder, both James E. Pedersen, President of the NCC and Ricardo Graham, President of the Pacific Union, have written pastoral editorials. Their words convey no hint of concern that membership growth is flatlining; that Adventist evangelism in the NCC is impotent. Should lay Adventists be concerned about how their tithe money is being spent?** Is this NCC Report a canary in the First World Adventist Mine? 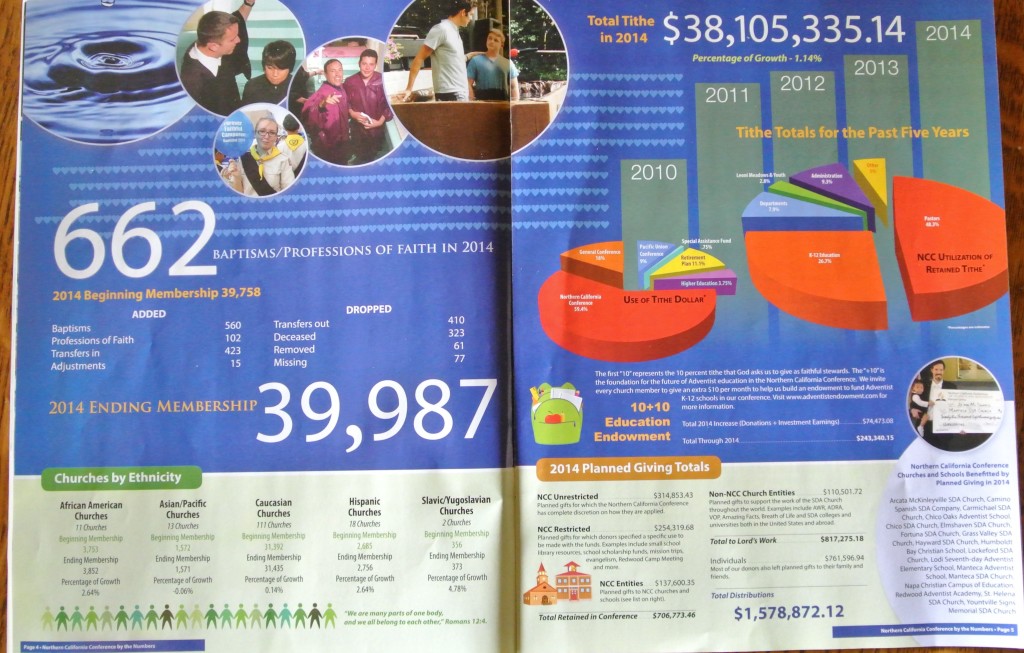 We are God’s stewards, entrusted by Him with time and opportunities, abilities and possessions, and the blessings of the earth and its resources. We are responsible to Him for their proper use. We acknowledge God’s ownership by faithful service to Him and our fellow men, and by returning tithes and giving offerings for the proclamation of His gospel and the support and growth of His church. Stewardship is a privilege given to us by God for nurture in love and the victory over selfishness and covetousness. The steward rejoices in the blessings that come to others as a result of his faithfulness. (Gen. 1:26-28; 2:15; 1 Chron. 29:14; Haggai 1:3-11; Mal. 3:8-12; 1 Cor. 9:9-14; Matt. 23:23; 2 Cor. 8:1-15; Rom. 15:26, 27.)