Watching the Sausage Being Made 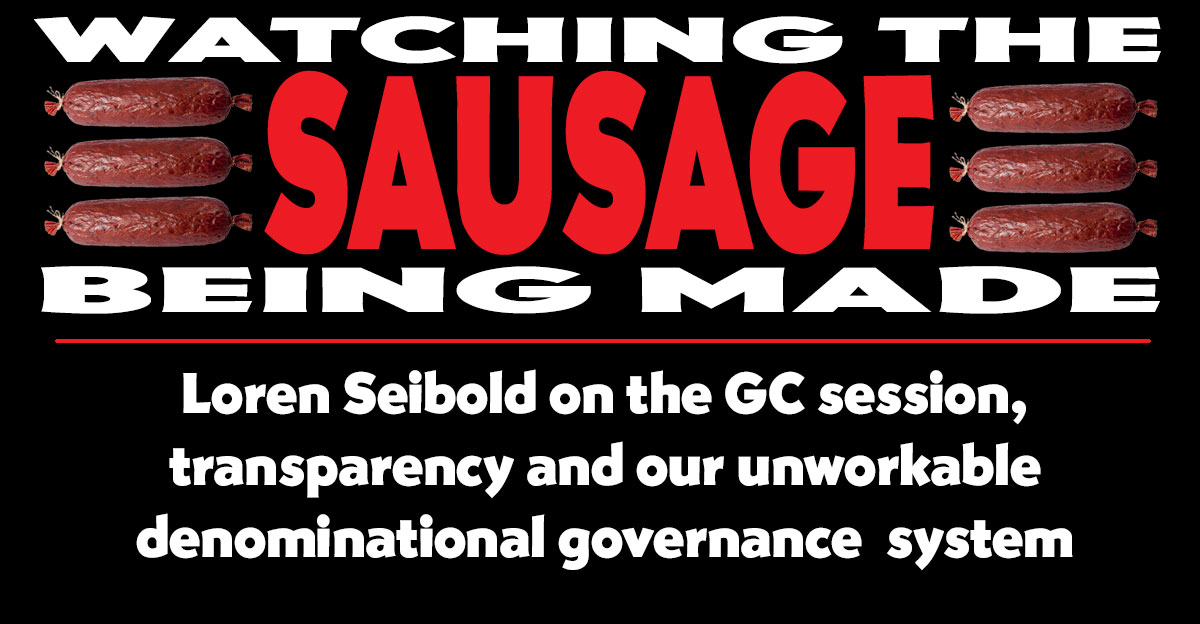 A friend of mine, a pastor’s wife, wrote this to me a couple of days ago:

Two of our members went as delegates to the General Conference session this week. These members texted me from the General Conference floor during the week. They were stunned. They saw with their own eyes the brokenness of our system. They couldn’t believe how things were run. One phoned me, crying. I listened and cried with her.

Such comments weren’t uncommon this week from pastoral colleagues, from young Adventists, from women discouraged about equality, from LGBTQ+ Adventists, from people of many races, countries, and languages who feel their church leaders are living in another world, a world of the past.

I have already written about those who dismissed these meetings as irrelevant. But this week I became concerned for those who told me, “I listened to the General Conference (GC) session. I wish I hadn’t. It has left me discouraged.” Several (even some pastors) added the hashtag #notmychurch.

I once asked one of my members to take a church job that involved his being on the church board. Three months later he dropped the job. When I asked him why, he said, “I didn’t realize that it would be like that.” “Like what?” I asked. He told of his disappointment that there was tension and arguing in the board meeting. “Surely, as a person who has worked for big corporations, you knew that organizations have tensions,” I said. “Of course,” he replied. “But I didn’t want to know about them in my church. I want to come to church feeling that we’re all worshiping God in warm and loving fellowship. But now you’ve made me see that some of those people I so admired are opinionated and a little mean. I can’t unknow that.”

He added this, which I’ve always remembered. “My dad said to me, ‘I once saw the kitchen of my favorite restaurant. After that I didn’t want to eat there anymore.’ And I should never have seen behind the scenes of my church.”

It reminded me of a maxim that’s variously attributed to (but probably wasn’t original with) Mark Twain, Otto von Bismarck, or John Saxe: “If you like sausage, you won’t want to see it made.”

It used to be that only a few people knew how church governance worked. General Conference delegates were, back then, almost all employees. Even if they had questions about the fairness and honesty of church processes, they remained quiet for reasons of piety or employment.

Besides, what you mostly got in the business session was apologetics and reassurance. The big decisions were made in the back rooms. By the time the main business got to the floor it had already been decided in confidential committees.

When live-streaming video happened, many of us believed the transparency would be good for us, that it heralded better decision-making, more honesty, and (we dared to hope) a more flexible and progressive church.

So far, live-streaming and recording the business sessions hasn’t really solved the problem. All it has done is to show us how broken the system is.

For me, nothing I’ve seen this week surprises me. But then, I’ve had a lifetime to be disabused of the notion that denominational machinery works efficiently for the good of the church. I do worry, though, about those who felt as my church member did, or like the delegate that my friend told me about: they have been surprised to see that making the sausage was such an unpleasant and frustrating process.

Take the discussion on Thursday afternoon and evening (in my time) about approving the statements affirming the Bible and the writings of Ellen White.

Now, even if you think Ellen White’s role as an inspired interpreter should be more carefully nuanced, you knew that there was no way the delegates of the General Conference Session were going to leave the venue without affirming both statements. That was never in question.

So why did it take so long? Because, it appeared to me, a few people were concerned enough that they wanted actually to talk about Ellen White’s role in this denomination. But that could mean someone’s saying something critical or hard for the brethren to answer. A potential disagreeable discussion. So it somehow turned into a parliamentary morass that took hours to dig out of. Rather than talking about the statements, everyone had to talk about points of order and whether to table or refer or reconsider, or should they should vote about whether they wanted to vote?

It wasn’t always clear that many of the delegates knew what was going on—and I’m not sure all of those running the meeting did either.

I think the parliamentarian was doing his best. The chair too. I don’t blame them.

Well, I do blame them to some extent, but not entirely. Because here’s really why it wasn’t working: the model for this meeting is unworkable. You cannot call together for a few days 2,700 delegates who span the world spectrum of culture, language, and Adventist theology and expect them to accomplish anything worthwhile. How can you have an open, thoughtful discussion about anything of importance with so many people who have no history of working together? Who live in different worlds? The church has evolved to the point where one huge meeting every five years to make decisions that affect 20 million of us is impossible—especially when some want to use it to legislate every detail of who we are, how we live, and what we believe.

So the brethren do the only thing they can reasonably do: maintain control. Keep everyone busy and prevent anything unexpected (or good) from happening. This is achieved by overcomplicating it to the point where participants give up.

While we want parliamentary machinery to help us make progress, it also works to obscure, confuse, and control. Here are some of the things I and others noted:

I don’t think transparency should go away. Transparency has revealed a system so badly broken that it must be manipulated to work at all. That’s something we needed to know. If we don’t want to give up on democracy and let Silver Spring run the church by itself (which may work about as well as what we have now), we need transparency—not just live-streaming the business sessions, but knowing what goes on behind the scenes, too.

But transparency alone doesn’t solve the problem. Even if the people who are running things are well-intentioned people (and generally speaking, I think they are), is it worth the tens of millions of dollars spent on what increasingly appears to be a pretense of representative church governance?

Is there any way to correct it? There is so much inertia in the church that it seems almost impossible. The church structure is frozen, fossilized. It is no longer helping our ministry and mission, and in some instances it is hurting it.

The only possible answer, it seems to me, is to quit making so much sausage.

I propose that it’s time to put an end to this pretense of one world church with everyone in agreement. It is time to quit pretending that a small team in one office in Maryland can speak for all of us—Silver Spring has too much power, and its leader too big a megaphone. Even a hundred years ago Ellen White intended for the church to be regional, without one strong “king” in control.

Let us put an end to the idea that all parts of the church must agree—or even that it is good for us all to agree. I wish we could return to the more inclusive Adventism our pioneers had in 1861 when they wrote “We, the undersigned, hereby associate ourselves together, as a church, taking the name, Seventh-day Adventists, covenanting together to keep the commandments of God, and the faith of Jesus Christ.”

As I listened to Elder Wilson’s sermon on Sabbath, I couldn’t help but wish we could restore a faith as simple and understandable as our pioneers’ was.