Can This Planet Be Saved? 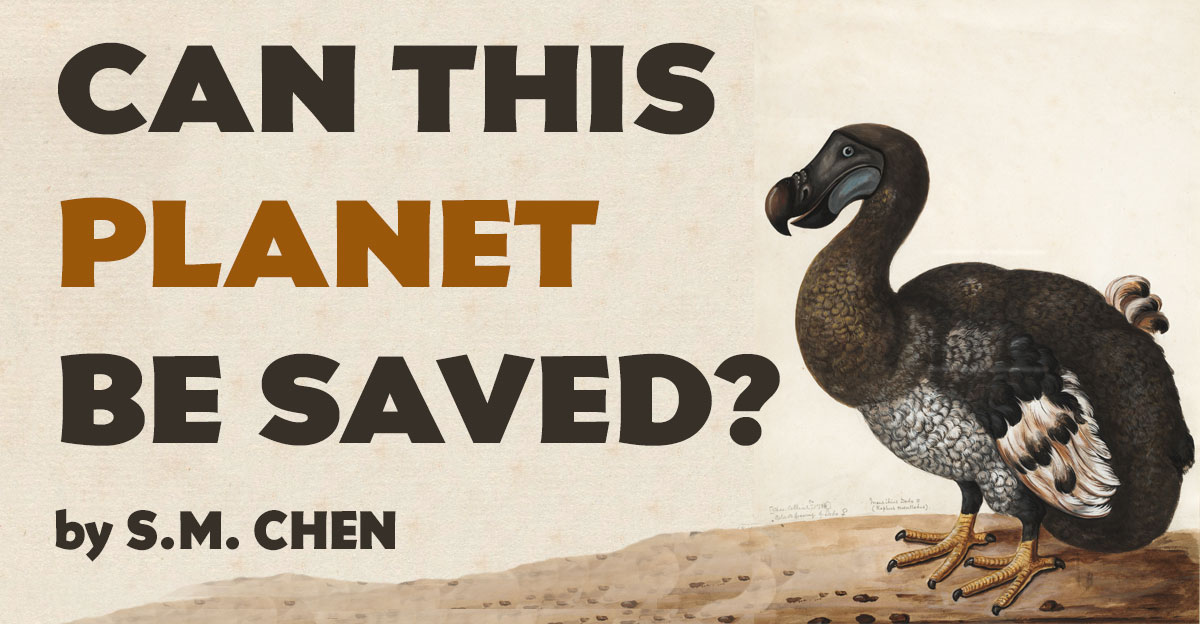 “We do not inherit the earth from our ancestors; we borrow it from our children.” —Native American saying

The dodo bird and the passenger pigeon are just two I remember. You may be thinking of your own names—names of those who have gone before, who are no more. They were not the first, and certainly won’t be the last, to disappear forever from the face of the planet.

We could build a memorial to them, like the Vietnam Veterans Memorial in Washington DC was constructed to commemorate the dead in a war we neither won nor learned from. It might not be the thing of beauty the Memorial is, but no matter. At least it would help us remember. Only there wouldn’t be 58,000 names on it—instead, millions.

Unlike the names on the Vietnam Memorial, they won’t be capitalized. They would likely be in lower case, as how I’ve written the names of the dodo bird and the passenger pigeon. We honor only the dead of our own species with capital letters. It is perhaps a measure of the regard in which we hold the lives of other species that we do not capitalize their names.

Perhaps we should capitalize them. Perhaps it would help us better remember.

Because we have done it to them. We have no one to blame but ourselves.

I do not exempt myself. Some of my enlightenment has only come with age.

We have taken this incredible gift – planet Earth, the only place most of us will ever call home, this pale blue dot (as it appears in distant photos and was called by American astronomer Carl Sagan) in the vast cosmos—perhaps the only place in our galaxy that contains intelligent life—and made it into something it was not.

And that something is decidedly not as good as it started out being.

There is a legend in Greek mythology about a king named Midas. In addition to king, he appears to have been an instantaneous alchemist: everything Midas touched turned to gold—the so-called “Midas touch.”

Walt Kelley, artist and creator of the comic strip “Pogo,” penned these short lines: “We have met the enemy, and he is us.” What is good and golden (in a broad sense) we turn to dross.

PBS recently aired a documentary called “Extinction: The Facts.” (You can view it here.) Made in 2020 and narrated by British filmmaker Sir David Attenborough, it features comments by various thoughtful scientists interspersed with examples of how our planet has been adversely affected by the hand of human beings.

I will not talk about the documentary in detail. As some lawyers may be fond of saying: “Res ipsa loquitur”—the thing speaks for itself.

I do have a few comments and observations, however.

Suffice it to say, vast numbers of plants and animals are at the risk of extinction. Some familiar to us may no longer be around when our offspring roam the earth after we ourselves are gone. If one plots time vs. the rate of extinction, the latter has become exponential. It is occurring simultaneously in three places that begin with A: Africa, the Amazon, and the Antarctic.

There are likely others as well, but their names don’t lend themselves to alliteration.

If you, like some, are not particularly concerned about the environment, consider this:

Pandemics, such as the one of COVID-19 that has had devastating consequences and that we have not yet emerged from, may be at least partly the result of human encroachment on nature.

And, if we do emerge from the pandemic, there may be others to follow. There is no guarantee they won’t be worse. What we are now experiencing may be a wake-up call. Whether we heed it is up to us. Swine flu, SARS, Ebola – all are due, in some way, to humans. Humans interacting more closely with other animals, often to the animals’ detriment. Trapped animals (such as those destined for wet markets) are stressed. Stressed animals shed viruses to greater degree. And humans may be the recipients of those shed viruses.

Mother Nature dislikes being tampered with. The ways she reacts to that tampering are unpredictable and sometimes deadly. We may be killing ourselves.

There are many dots, some apparently disparate. But they appear to all be connected. In some way. Ways we may only be beginning to understand. Some in ways we may never understand.

Just as the English poet John Donne (1572-1631) observed centuries ago, “No man is an island,” so, it seems, no dot stands alone. If we can perceive it, it seems interconnected with some other dot somewhere. If we look hard enough or are perceptive enough, we may discern that connection.

Fishing has increased over the past four decades. On any given day, there may be up to 100,000 trawlers on the seas, seeking fish. Overfishing is a key problem. When given a choice between overfishing for a short time vs. sustainable fishing over a longer time, man has always chosen the former, to the detriment of the planet and, ultimately, himself.

We have lost 90% of our what is called wetlands. 3.8 million hectares of forest have been cleared, beyond that which was necessary.

PCB (polychlorinated biphenyls) are toxic, and accumulate in killer whale blubber. The ovaries of a killer whale that died off the coast of the British Isles were found to be atrophied. No wonder killer whale numbers are decreasing in that area.

There may yet be hope

Attenborough himself visited a gorilla group in Rwanda in 1970. At that time there were 250 gorillas. He wondered about their future, thinking their numbers might well diminish with time.

Now, despite relatively dense human population, and thanks to concerted efforts by concerned citizens, their numbers have increased to 1,000.

Where there is will, there may be a way.

As guardians of our planet, it is up to us to find both.