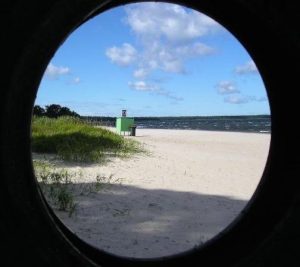 Water has ever been important to human beings and in human (as well as divine-human) interactions.

Our bodies contain over 50% water.  Over 70% of our planet is covered by water.

Division of water(s) was key in the formation of Earth.

Water was instrumental in the destruction of Earth by the Great Deluge.

The meeting between Eleazar, servant of Abraham, and Rebekah, future wife of Isaac, came about through his request for water at her city’s well.

And the miracle of the parting of the Red Sea to allow the Israelites’ escape from the pursuing armies of Pharaoh involved water.  It was because Moses struck the rock, rather than spoke to it, in response to the Israelites demanding water, that he was not permitted to enter the Promised Land.

Jonah’s being cast into the sea/water is what caused cessation of the storm that besieged the ship he had boarded in an attempt to avoid delivering God’s warning to Nineveh.

Christ’s first recorded miracle was the transformation of water into wine at the wedding in Cana.

And no less miraculous, although less obvious, was the conversion of the Samaritan woman at the well in response to Jesus’ request for water, when He revealed Himself to be Living Water, the Water of Life.

Peter, in his enthusiasm to emulate Christ, attempted to walk on water.  Like many others, he came to realize that, of himself, he could do nothing.

I lived in country near the Middle East for two years, and can attest to the importance of tea/water as custom and tradition.  Most of the water was not potable; drinking tea was one way of being reasonably sure the derivative water was safe.  And the courtesy of serving guests water/tea continued from Biblical times.

We who live in the Western world often take water, and its potability, for granted.  We should not do so.  I believe we should take nothing, and no one, for granted.

Water—H20 in chemistry.  Or, written another way, HOH.  Two atoms of hydrogen, the most abundant element in the universe, comprising about 75% of its mass.  And one of oxygen, which comprises about 47% of our Earth’s mass.

This may be a bit of a stretch, but it occurs to me that HOH could also symbolize the Trinity.  O might represent God the Father, the alpha and the Omega, the One who can only be described in superlatives.  Omniscient, omnipresent, omnipotent.

The first H might represent the Son.  He who knew no sin.  He who sacrificed Himself on our behalf.  Holy and utterly without blemish, save for the marks of crucifixion He will ever bear.

The second H might represent the Holy Spirit/Holy Ghost.  About whom we know little, based on Holy Writ (I have to assume that was by design). But an essential part, nevertheless, of the Triumvirate.

Such attempts will meet with failure.  As the Wise Man observed, “All is vanity”  (Ecclesiastes 1:2).

So back to the story of the 33 Indians who were converted as the result of a simple request for a cup of water:  God does indeed move in mysterious ways, His wonders to perform (from Christian hymn, William Cowper, 1773, based on his poem ‘Light Shining Out of Darkness’).

A fascinating, although unsubstantiated background of the poem/hymn, supposedly the last Cowper penned (from cyberhymnal.org):

‘Cowper often struggled with depression and doubt.  One night he decided to commit suicide by drowning himself.  He called a cab and told the driver to take him to the Thames River.  However, thick fog came down and prevented them from finding the river.  After driving around lost for a while, the cabby finally stopped and let Cowper out.  To Cowper’s surprise, he found himself on his own doorstep:  God had sent the fog to keep him from killing himself.  Even in our blackest moments, God watches over us.”