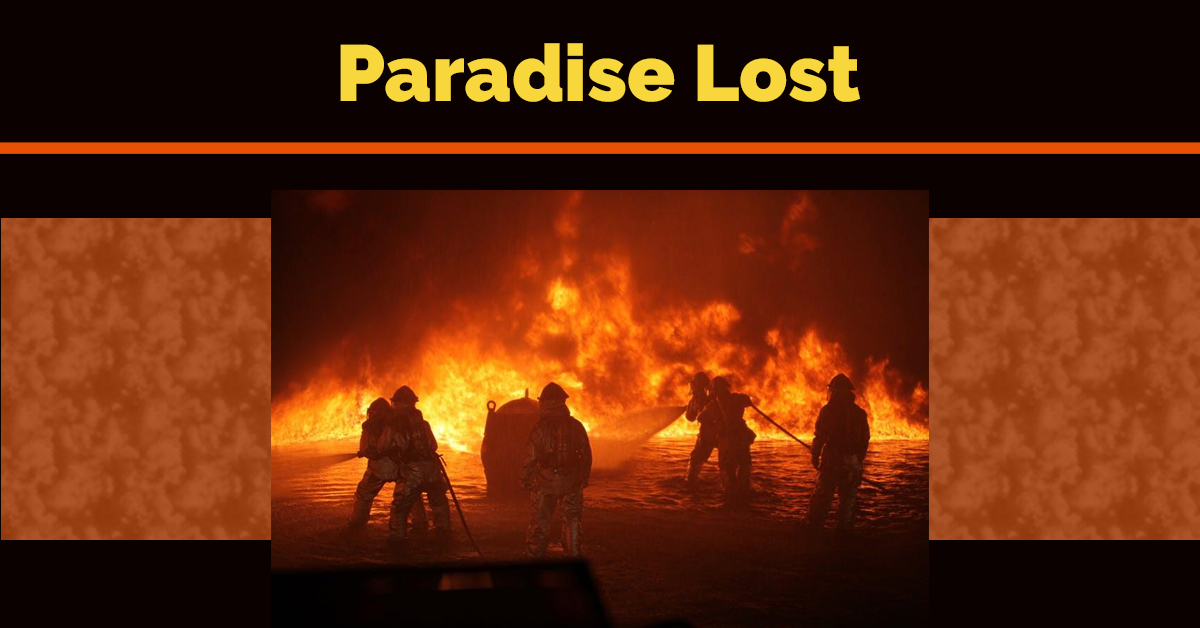 “God moves in a mysterious way, His wonders to perform.”
William Cowper (1773), poem: “Light Shining out of Darkness”

Before that, I used to jest that my sister reached Paradise before any of the rest of us, but the fire put an end to any such talk.

The town seemed to have been misnamed.

It is tempting at such times to inquire, as did the disciples of the Gospels, who was to blame. Was this the wrath of the Almighty in response to iniquity on the scale of what once existed in Sodom and Gomorrah?

Such inquiry, if it occurred at all, was likely met by silence.

Iniquity resides in the heart of man, and has ever since the Fall, but on a mass scale the town of Paradise, to a casual observer, did not seem particularly wicked.

Even if it were, would God’s wrath be visited on it in such a way as widespread conflagration?

She and her husband escaped with their lives and precious little else. A few things, including a laptop computer. All that remained on their 11 acres was a water pump.

They fled to nearby Chico and mulled what to do. Rebuild? Sell? Insurance payments muted the pain of their loss, but they still needed to make a decision.

They had multiple factors to consider.  Their children were scattered throughout the country. As were their grandkids. Ruth was not gainfully employed. Tim was near the end of his career. They conceivably could live almost anywhere.

They sought wisdom from a place none of us can see or have physical access to. Yet we can access it. Communication in a dimension we don’t understand occurs back and forth along the invisible ladder that reaches from earth to sky, the one that Jacob glimpsed in his dark night of the soul, a rock for a pillow.

A month later, another fire, the Camp Fire, burned along the west branch of the Feather River. Thousands more were evacuated, but the fire failed to cross the river.

Still, it was somewhat surprising to me that they decided to sell their acreage and relocate from Butte County.

I know not what kind of sign – if any – they sought. Maybe it was a modern equivalent of Gideon’s fleece. Perhaps not. Few if any of us use such tangible evidence anymore. That may be our failing.

Northeastern Washington state seemed in the middle of nowhere. The small town they chose was close to the Columbia River and the Canadian border. It was not particularly near family or friends, and seemed decidedly more rural than was Paradise.

Their son and I agreed to help drive extra vehicles from Paradise to WA, but, in the end, we were not needed.

So they moved into a multilevel house with log cabin façade, the kind Abe Lincoln might have hewn in his prime.

She worked on music (she has a M.A. in organ performance; I attended her recital and, at the risk of partiality, can say it was sublime) and he worked as a valued EMT for the community.

Both are altruistic, and continued to do good. As Mother Teresa observed, “It is not how much we do, but how much love we put in the doing.” They had plenty of love to give.

They took in strangers, some of whom were difficult and showed little appreciation; were active in their local church, and kept busy.

For a time, they took in a foreign exchange student. They were the kind of people who would do that. Not all of us are.

More recently, they took in Tim’s brother. Tim had promised their mother that he would look after Mike before she died. Mike has some mental health issues and has spent years homeless, on the streets.

I asked their son once, “Why did they choose to move to Northport?” He mulled a bit, then admitted he didn’t know.

He installed a motorized elevator chair to access the upper level of their own 2-story house (stairways are steep).

One of Ruth’s daughters recently underwent double-lung transplant surgery and is still recovering.

It waits for no one, least of all for those who watch the clock.

But I still would wonder from time to time, why did they not stay in Paradise?

Then, recently the Camp Fire came a second time and decimated the community in 8 hours, this time with greater vengeance than before. It burned over 240,000 acres and thousands of homes. 74 people died.

The local hospital, at which Tim had once worked, was at least partially destroyed.

The queue of radiologic cases from the hospital dwindled to nothing for a time. It is only starting to climb in number.

I feel badly for those who were affected, whose homes burned, whose lives were devastated, as detailed by Jack Hoehn in a recent ATODAY report after he spent time in the erstwhile town with his sister.

But now I think I know.

I no longer wonder why my sister and her husband didn’t stay and rebuild in Paradise.

There is now no there there.

Is there a lesson in this?

As the clock winds down, approaches midnight, we are reminded of the frailty of man, of much bigger forces at work, of our limited ability to alter circumstances and our environment.

Where we live will once again be cleansed. And in a literal way. The fires in Paradise are but a foretaste of things to come, which will be on a scale that will dwarf what happened there.

All we can do is prepare ourselves. For all of us there are only two outcomes other than in a cosmic sense. Our eyes will close for the last time or the Parousia will happen in our lifetimes.

Earth is but a stop on the journey to Paradise.