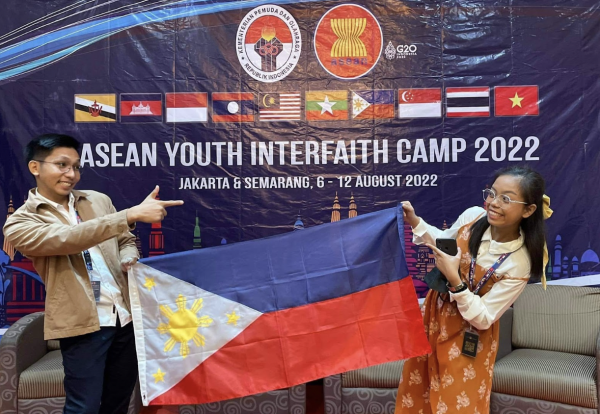 12 August 2022 | Imagine walking into a room full of people with whom you have a history of tension, but still really want to impress. Then imagine telling them, “Knock it off with your dirty bad habits.”

The situation would be difficult for most people of any age, but that’s just what two Adventist young adults, Angeilyn P. Antivo (Eastern Visayas) and Rowell B. Velonza (National Capital Region), did at the ASEAN* Youth Interfaith Camp (AYIC) 2022  held in Jakarta and Semarang, Indonesia, from Aug. 7-12, 2022, according to a Southern Asia-Pacific Division (SSD) article.

AYIC is a regional gathering that aims to provide a platform for ASEAN young people from different religious backgrounds to conduct dialogue and establish a strong network.

Buddhism and Islam are the two dominant religions in nine out of 10 ASEAN countries, according to the Nalanda Buddhist Society. Buddhism is the religion of the majority in Cambodia, Myanmar, Laos, Singapore, Thailand, and Vietnam; Islam is the dominant faith in Brunei, Indonesia, and Malaysia.

Although the majority of the people in the Philippines are Catholic, Antivo and Velonza—both active Adventist members—represented the country at AYIC 2022.

Antivo and Velonza gave a presentation on SADFREE (Smoking, Alcohol and Drugs Free), a movement that aims to save young people from the harmful effects of smoking tobacco, drinking alcohol, and using illegal drugs.

According to the World Health Organization (WHO), tobacco claims 1.6 million lives in the WHO Southeast Asia region, which is also amongst the largest producers and consumers of tobacco products. The region accounts for 81% of smokeless tobacco users. It is also home to more than 22% of global adult smokers aged 15 years and above. Over a third of the world’s children aged 13 to 15 years (34%, or 14.8 million), using various forms of tobacco, belong to the Southeast Asia Region.

Antivo and Velonza finished their presentation with a message for the delegates to become active in helping their communities to quit unhealthy habits. The program is expected to produce post-event initiatives at the community level, according to the SSD.

The ASEAN Youth Interfaith Camp is organized by the Ministry of Youth and Sports of Indonesia in cooperation with the National Youth Commission of the Republic of the Philippines.

*The Association of Southeast Asian Nations, or ASEAN, is a political and economic union of 10 member states in Southeast Asia:  Brunei, Cambodia, Indonesia, Laos, Malaysia, Myanmar, Philippines, Singapore, Thailand, and Vietnam. It promotes intergovernmental cooperation and facilitates economic, political, security, military, educational, and sociocultural integration among its members and other countries.

(Photo: Rowell B. Velonza and Angeilyn P. Antivo (from left), two active Adventist church members, represented the Philippines at the 2022 ASEAN Youth Interfaith Camp held in Jakarta and Semarang, Indonesia from Aug. 7-12, 2022. Photo courtesy of the National Youth Commission via the SSD website.)

Before you go… AT can only publish its unique brand of accessible, independent journalism because of your support. The August 12-21, 2022 AT Spring Fundraiser is ON.