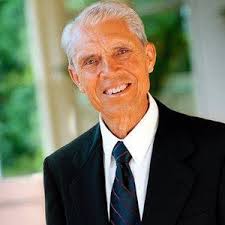 Dr. Desmond “Des” Ford went to his rest in Christ today at the age of 90. A pastor in Australia, where he was born and raised, he graduated from Avondale College in 1950 and completed a Master’s degree in systematic theology in 1959 at the Seventh-day Adventist Theological Seminary when it was located at Potomac University in Takoma Park, Maryland. In 1961, he earned a PhD from Michigan State University with a dissertation on the rhetorical analysis of Paul’s letters in the New Testament. In 1972 he earned a second PhD from the University of Manchester in England. During his graduate work he continued to be a faculty member at Avondale, where he served as chair of the religion department from 1961 to 1977.

He came to the United States as a visiting professor of religion at Pacific Union College (PUC) from 1977 to 1979. At a local chapter at PUC of the Association of Adventist Forums (AAF), the largest organization of Adventist academics, in 1979 he presented a critique of the traditional Adventist view of Daniel 8:14 and the Investigative Judgment, and controversy erupted throughout the denomination. He was called to the denomination’s General Conference (GC) headquarters in Takoma Park to prepare a paper defending his views, and Bible scholars and denominational executives came together to consider it in the historic 1980 Glacier View Council.

In the aftermath of the Glacier View Council, the denomination’s Australasian Division (now South Pacific Division) withdrew his ministerial credentials and eventually ended his employment within the denomination. In reaction to this outcome, controversy swept across the denomination in the United States and Australia, independent Adventist congregations formed in many places and hundreds of clergy resigned or were forced to leave denominational employ.

Ford continued to be a member of the Adventist Church and was employed by an independent ministry, Good News Unlimited, that supported him in an evangelistic radio broadcast that aimed to “represent the essential truth of the Gospel with no boundaries or limitations.” Ford continued to work with Good News Unlimited as a speaker and writer, even after his retirement late in the year 2000. His vision was to “reach the world for the gospel in all its simplicity and beauty,” and it is evident that due to his efforts, many have come to learn more about our Lord and Savior, Jesus Christ. He continued to publish books defending the Sabbath doctrine and the spiritual gifts of Ellen G. White. Throughout his life Ford penned more than 30 books, many of which are still in print.

In a 2016 interview in Spectrum, the journal of AAF, he said that he would like to be remembered “as a ragamuffin from North Queensland [to] whom the Lord taught the gospel and perhaps used to impart it.” Seventh-day Adventist author, church historian, and religion professor Milton Hook wrote Ford’s biography, Desmond Ford: Reformist Theologian, Gospel Revivalist, which was published in 2008 by Adventist Today.

Ford was born in Townsville, Queensland, Australia on 2 February 1929 to Wilfred Ford and Lillian Simpson. Although professed Anglicans, neither of the parents was very religious. Ford cited Ellen White’s The Great Controversy as a key component in his conversion during his youth, and in September 1946 he was baptized into the Adventist Church. One year later, he enrolled at Avondale College where he met fellow student Gwen Booth, whom he married in 1952. She died after a battle with cancer in 1970, leaving him a young pastor with a daughter Elènne Gwen Ford and sons Paul Wesley Ford and Luke Carey Ford. He would marry Gillian “Gill” Wastell later that same year. She survives him today as both his widow and his literary assistant.

Wrote his widow, Gill, “The staff at the home all told me they had never met anyone so polite, so thankful, so courteous. He had great gifts and abilities but when they were stripped away, the purity and goodness of his soul shone out.”

She added, “He was a man always in a hurry, driven by a mission to serve God and proclaim Christ. He would urge you to take up the work he has laid down. As many of you know, he would say, ‘Meet you here, there or in the air.’ He has gone ahead of us. And the world is a far colder place.”

A new printing of his original 900-plus page manuscript commissioned by the GC in 1980 with updated introductions and annotations was published last year, as announced in Adventist Today here.  The biography written by Milton Hook and published by Adventist Today is also available for order by email from our Membership Services at atoday@atoday.org or call 800.236.3641.

The photo was provided by Good News Unlimited. Adventist Today editorial associate Stefani Leeper assisted with the research for this news report.