Why I Think an All-Powerful God Might Not Exist

I am increasingly convinced that we view God’s supposed power all backwards. I don’t think Lucifer would have bothered starting his rebellion if he thought he was up against an all-powerful divine being. In fact, I suspect God may be the weakest being in the entire universe. God as omni-impotent rather than omnipotent. Or at the least, when we say God is all-powerful, our concept of power may be grossly misconceived.

Eighteenth-century philosopher David Hume, reflecting on this problem, suggested that if God were truly omnipotent, He wouldn’t allow evil to exist; if He allowed evil to exist, then God couldn’t truly be omnipotent.[1]

It’s an age-old problem. To say something controversial but obvious, maybe God isn’t all-powerful? Maybe our common view of divine power owes most to pagan Greek philosophy, with its emphasis on divine detachment or divine impassability (suggesting God is not affected by the external suffering of others),[2] and divine immutability (God as unchangeable)?[3] Could it be that the personable God of the Bible is nothing like this?

Given that Greek philosophy is so pervasive throughout Western Christianity—courtesy of a number of notable medieval theologians,[4]—maybe it’s no wonder that so many people today, particularly in the Western world, say they don’t believe in a God like that. Maybe atheism, as a predominantly Western philosophical construct, is a straw man built upon disbelief in an all-powerful God that never actually existed in the first place. So maybe atheists aren’t as awfully clever as they like to portray themselves.

A Baby and a Nailed Cripple

Although I have had these thoughts for quite a while, and even written about them previously, two recent events solidified my opinion that God is not all-powerful.[5]

The first was one night going to bed with a sore back and waking up some hours later partially paralysed from the waist down. After somewhat confusing and ultimately questionable medical advice, I ended up in the emergency department of a major hospital. It took a week in hospital and a barrage of medical tests to determine that I had transverse myelitis, a serious neurological disorder.

The second event was the birth of my daughter and second child, Eloise Vanessa Ferguson—six weeks premature. We still don’t know what caused my wife to go into labour so early. As I write these words, we are in the middle of a logistical nightmare, having to drive back and forth to the hospital several times a day as Eloise spends the first month of her life in the neonatal unit.

These personal events reminded me of two biblical events, events so important they form the basis of the Christian calendar and even the basis of marking time itself: Christmas and Easter.[6] Christians believe the best example of who or what God is can found in the life of Jesus Christ, God incarnate (John 1:1-2,14). And when you think about Christmas and Easter, they are not exactly depictions of God’s power—at least as humans understand power.

Yes, there are clearly biblical texts that allude to God’s power. God can create and destroy worlds. God is both the creator of a hundred billion galaxies and the being who knew us when we were being knitted together in our mothers’ wombs. And yet I suspect there is an ironic undercurrent to most of those biblical passages, which many of us miss but which Christmas and Easter exemplify.[7]

In the Easter event, God incarnate who healed paralytic cripples was made immobile by being nailed to a cross. It was God incarnate who Himself felt helpless and abandoned by God, crying out, “My God, my God, why have you forsaken me?” (Matt. 27:46)

How then have these two depictions of divine powerlessness had the power to change the world? Why would God reveal Himself in such an ironic way?

As we Christians like to tell people, God is love (1 John 4:8). And if anyone who has suffered a broken heart knows, love can really stink. This is because love and power—at least an overt coercive kind of power—cannot easily co-exist. True love demands power be surrendered, because true love demands a risk that is antithetical to power’s surety of control.

This occurred to me in a real way as I was holding my baby daughter for the first time. I had the disturbing thought that I could without much physical effort end her tiny life in an instant. I could crush her in my embrace and what could she or anyone else do to stop me?

But as her father could I really do this? I could no sooner deliberately end her life than attempt to breathe underwater, or jump off a cliff and fly through the air. This tiny, helpless thing hadn’t given me freedom as much as made me a slave to her love. Equally, as a child who depends upon her parents for her very survival, Eloise is also a slave to her parents’ love.

While holding tiny Eloise it occurred to me just how royally nailed God truly is. Religious thinkers across the ages have worried that God has predestined their lives. I think they have it all backwards. It is God who is as much predestined as any of us. It is God who has no choice but to certain courses of action in accordance with His own nature. Jesus’ being nailed to the cross wasn’t simply a literal event, but an exemplification of God’s own loss of freedom for the sake of giving it to us.

It is God’s own nature that creates indelible rules that more maleficent entities might try to exploit. It is in this sense—God as love—that I think God is probably the weakest being in the entire universe.

I suspect Satan knows that too.

Is God the Distant Watchmaker of Deism?

My new baby daughter Eloise doesn’t do much either. She kind of just sits there, tiny and almost invisible in her crib. Moreover, because she is pre-term, she hardly even cries or makes any other sound. The loud screams of full-term newborns suddenly became quite noticeable to my wife and me, compared to the barely audible whimpers of our little girl.

Yet for all her apparent uselessness and near-silence, Eloise has turned her parents’ lives upside down. Not just for us. There has been a cascading effect on our family and friends, employers and workmates.

If we instead measured Eloise by her impact in changing others’ thoughts, feelings, habits and behaviours, rather than ordinary worldly standards, one would have to conclude she is in fact a very powerful being. Immensely powerful in fact. Eloise demonstrates what German theologian Wolfhart Pannenberg saw as divine revelation “from below” and what Jürgen Moltmann explained as our misunderstanding about the nature of omnipotence.

But does God actually exist—and does it really matter?

I know some of Adventist Today’s readers are sceptical. Some of you will be hanging onto belief by a thread, or will have jettisoned belief altogether some time ago.

Some of you might think these are the sleep-deprived platitudes of a father in shock, with no rational bearing on the objective question of whether God actually exists.

Nevertheless, let me ask you, does it really matter?

I will tell you now that Eloise is a real person, with brown hair, blue eyes, her mother’s face, but with my nose. However, almost no one can ascertain the truth of that statement. She doesn’t yet have a birth certificate issued by the State Registrar of Birth, Deaths and Marriages. Furthermore, because of very strict medical controls, only parents and grandparents are allowed into the neonatal hospital ward. Eloise’s own brother – two-year old William – has never met her. Neither have her aunties, uncles, cousins, great-grand-parents, or her parents’ friends and colleagues.

Perhaps her alleged birth has all been some elaborate hoax. I could also be deliberately or inadvertently mistaken about Eloise’s appearance, given newborn children often rapidly change their appearance. How would you know? I could be a false prophet of her existence.

Nonetheless, does it even matter in a practical sense? I have been astounded by the generosity of spirit amongst so many people, none of whom have been able to conclude the truth of Eloise’s existence or the nature of her being. It seems the idea of Eloise—not Eloise herself, whom these people have never actually met—is what has changed so many lives for the better.

So I believe it is with God. 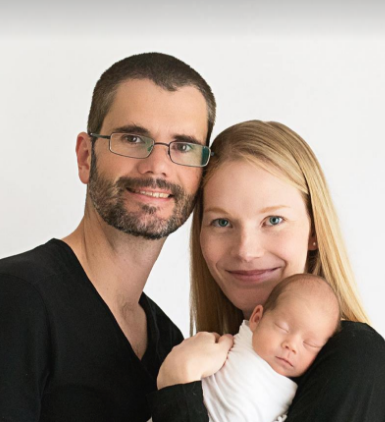 Stephen Ferguson is a lawyer from Perth, Western Australia, with expertise is in planning, environment, immigration and administrative-government law. He is married to Amy, and has two children, William and Eloise. Stephen is a member of the Livingston SDA Church.