Why I Love Atheists, Agnostics, Backsliders… & All Who Aren’t at the Center of the Faith 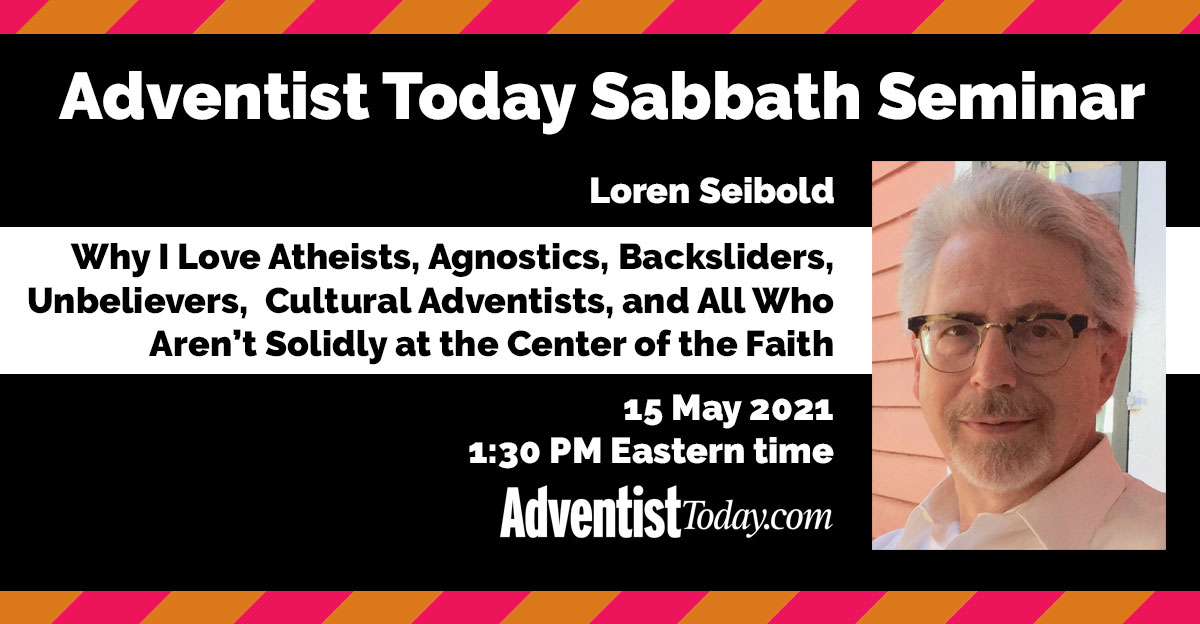 This week’s ATSS conversation will be based on this article.

In my grouchy old age, I’ve become less patient with many of our assumptions about both theology and culture. It struck me one day that I’ve always had a set of people in my life who question Seventh-day Adventist theological assumptions, who might once have believed all of it but don’t anymore. And I am increasingly appreciating them. Some of them are the most thoughtful, honest, interesting people I know.

In spite of my role as an advocate for the Christian faith, I no longer feel that my unbelieving friends are threatening—or even that they’re all going to be lost.

It can be hard to know, among all the competing claims by religious people, what one should believe. But one thing—the most important thing—I have faith in is that God is good. That God is neither unreasonable nor selfish. That God’s understanding of us is far above our understanding of ourselves, of one another, and of the world we live in. That God is neither petulant nor cruel. That God doesn’t double-speak, or hide intentions, or make us figure out things with algebra in order to be saved. That God doesn’t base our salvation on things like food or jewelry or on which human organization records our names on its books. And that, above all, God understands our difficulty to believe in Godself.

This last is essential to me. We recognize when human beings are good, and we love them for it. Isn’t God, by definition, better? Jesus made a version of this argument: “If ye then, being evil, know how to give good gifts unto your children, how much more shall your Father which is in heaven give good things to them that ask him?” (Matt. 7:11, KJV).

So many unkind Christians describe God as their own alter ego, the big guy up there who just wants to kick unbelievers’ bottoms straight into hell. Frankly, the kind of God many Christians describe, and the kind of God they personify, isn’t one I want to spend eternity with. I’d rather be destroyed in hell than spend forever with a God who was anything like some of the believers I’ve known.

A dear friend of mine, a deeply sincere and godly Adventist, told me that his son had confessed to him that he was not only no longer a church member, but an atheist. “My son is a good man,” he told me. “A kind and wonderful father, son, and husband. But I’ve accepted that I will not be spending eternity with him.” I found that heartbreaking. Fortunately, I don’t believe it, and I wish I could convince him to doubt it, too. In the world in which we have landed, it’s hard to believe in God, and one article of my personal faith is that God has to understand that, or he’s not a God I’d want to be in heaven with.

There are multiple reasons why one may reject a belief in God, and even more reasons to reject the traditional notions advanced by misinformed Christians. I have to believe, if I am to believe in God at all, that God understands and takes into account all of that. After all, if you and I can understand why people are as they are, why can’t God? Why would God throw under the bus a completely honest, searching, good man who, because of experiences and personality traits outside of his control, can’t accept the kind of God that is meaningful to you and me?

Gina Jett is an attorney in Boulder Creek, California.

This class is over. You can listen to the presentation here.